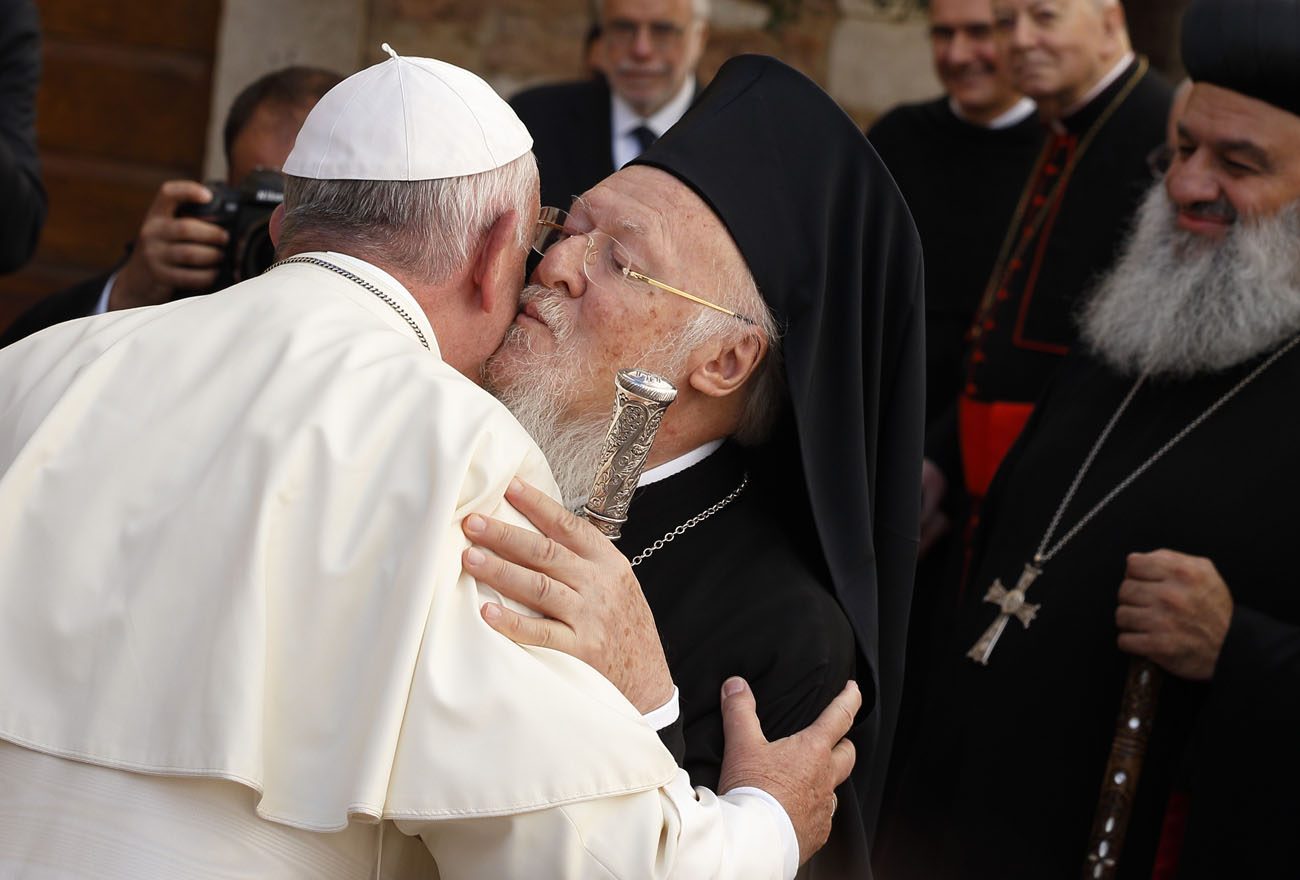 Pope Francis exchanges greetings with Ecumenical Patriarch Bartholomew of Constantinople as he arrives for an interfaith peace gathering at the Basilica of St. Francis in Assisi, Italy, Sept. 20. The peace gathering marks the 30th anniversary of the first peace encounter in Assisi in 1986. (CNS photo/Paul Haring)

ASSISI, Italy (CNS) — As leaders of dozens of religions gathered in Assisi for dialogue and prayers for peace, they honored Orthodox Ecumenical Patriarch Bartholomew of Constantinople as an exemplar of one who is so deeply rooted in his own religious tradition that he can reach out to others without fear.

Jewish, Anglican and Catholic leaders paid tribute to Patriarch Bartholomew as he was about to celebrate the 25th anniversary of his enthronement as spiritual leader of the world’s Orthodox Christians. Pope Francis was scheduled to participate in a celebratory luncheon for the patriarch Sept. 20 in Assisi.

The Assisi celebrations Sept. 18-20 were organized by the Rome-based Community of Sant’Egidio, the Diocese of Assisi and the Franciscan friars.

In a formal meeting hall at the Basilica of St. Francis in Assisi Sept. 19, the leaders praised Patriarch Bartholomew as an ecumenist, theologian and leading religious defender of God’s creation.

Anglican Archbishop Justin Welby of Canterbury presided over the tribute to the patriarch, and Cardinal Walter Kasper, former president of the Pontifical Council for Promoting Christian Unity, gave the main talk, highlighting how “with great tact in difficult situations” the patriarch “always helped to overcome complicated twists and turns with the grand dexterity of a ‘pontiff,’ that is, a builder of bridges.”

“Like you,” Cardinal Kasper told the patriarch, “we are certain that unity is a command of the Lord and a response to the signs of the times in a world that is increasingly united, but at the same time profoundly lacerated by many conflicts.”

The unity Christians hope and pray for, he said, will not be the result of “any absorption, or watering down or homogenization, but a unity in reconciled diversity.”

Rabbi David Rosen, international director of interreligious affairs for the American Jewish Committee, told participants, “There is an understandable but regrettable tendency among those who are deeply rooted in a religious tradition to be insular and exclusive in their world outlook. While on the other hand, all too often those who are more open to engagement with those different from themselves reflect a superficiality lacking substance.”

The biblical model of excellence, though, is of “a luxuriant tree,” the rabbi said. It is the image of “one profoundly rooted within his own heritage and yet whose branches reach out as widely as possible providing fruit for all.”

Saying that Patriarch Bartholomew is such a man, Rabbi Rosen praised the patriarch’s leadership in condemning all violence in the name of religion and in addressing the issue of climate change and care for creation.

“His leadership in the environmental movement, long before it became fashionable, is a reflection of his sincere and genuine care for the cosmos as a whole,” he said.

Saying he was humbled by the tributes, Patriarch Bartholomew jokingly told the crowd present, “Don’t believe everything you hear!”

The patriarch said that while he was touched by the words of those he has collaborated with and admired, his work “resembles only a drop of water in an ocean of human pain and global suffering.”

“We do not rejoice without at the same time recalling and sharing in the suffering of others. And, at the Ecumenical Patriarchate, we certainly never experience joy without remembering that we embody a tradition that has known both glory and martyrdom through the ages,” he said.

The celebration serves only as an affirmation “that the bishop, too, is a child of God and a son of the church,” the patriarch said.

NEXT: Pope joins global faith leaders in Assisi to pray for peace