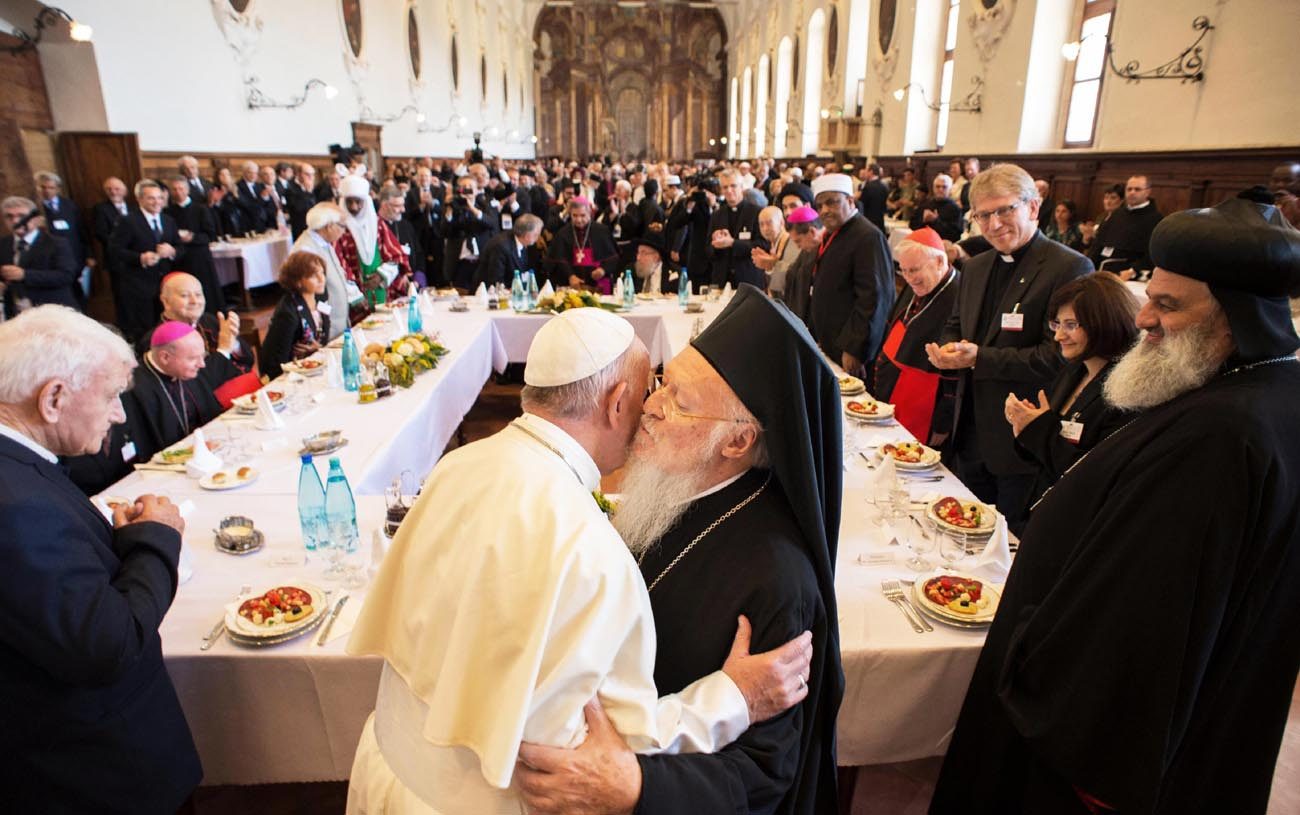 Pope Francis is greeted by Ecumenical Patriarch Bartholomew of Constantinople during an interfaith peace gathering Sept. 20 at the Basilica of St. Francis in Assisi, Italy. The peace gathering marks the 30th anniversary of the first peace encounter in Assisi. (CNS photo/L'Osservatore Romano handout via Reuters)

ASSISI, Italy (CNS) — Jesus’ cry of thirst on the cross is heard today in the cries of innocent victims of war in the world, Pope Francis said.

Christians are called to contemplate Christ in “the voice of the suffering, the hidden cry of the little innocent ones to whom the light of this world is denied,” the pope said Sept. 20 at a prayer service in Assisi with other Christian leaders, including Ecumenical Patriarch Bartholomew of Constantinople and Anglican Archbishop Justin Welby of Canterbury.

Far too often the victims of war “encounter the deafening silence of indifference, the selfishness of those annoyed at being pestered, the coldness of those who silence their cry for help with the same ease with which television channels are changed,” the pope said in his meditation.

The pope arrived in the morning by helicopter and was whisked away to the Sacred Convent near the Basilica of St. Francis.

After arriving in a blue Volkswagen, the pope raised his arms to embrace Patriarch Bartholomew and, together, the two greeted the other religious leaders present. Archbishop Welby, Syriac Orthodox Patriarch Ignatius Aphrem II of Antioch and leaders of the Muslim, Jewish, Hindu and Buddhist communities also welcomed the pope to Assisi.

Several refugees were among those who greeted the pope, including a young Yezidi woman from Iraq’s Sinjar district who survived the August 2014 massacre committed by the Islamic State. “I want to thank you for praying for the Yezidis and your support for acknowledging our genocide,” she told the pope.

“You have suffered a lot. I pray, I will pray for you with all my heart,” the pope said as he placed his hand over his heart. 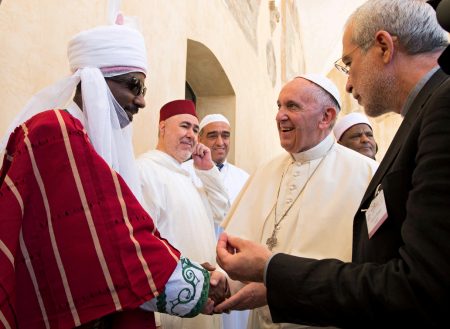 Pope Francis is greeted as he arrives for an interfaith peace gathering at the Basilica of St. Francis in Assisi, Italy, Sept. 20.(CNS photo/L’Osservatore Romano handout via Reuters)

After having lunch with a dozen refugees and victims of war, Pope Francis and the Christian leaders went to pray in the lower Basilica of St. Francis. Members of other religions went to different locations in Assisi to offer prayers for peace in their own traditions.

During the solemn celebration, prayers were offered for countries where violence and conflicts continue to cause suffering for innocent men, women and children.

One by one, several young men and women placed lit candles in a round stand as an acolyte read the names of each country, including Syria, Iraq, Afghanistan, Libya, Nigeria and Ukraine.

The prayer service began with a Liturgy of the Word, which included a meditation after each reading.

Reflecting on the first reading from the prophet Isaiah, Archbishop Welby said that the world today “struggles to distinguish between what something costs and what it is worth.”

Despite this, God responds with “infinite love and mercy” and offers to receive from him freely because “in God’s economy we are the poorest of the poor; poorer than ever because we think ourselves rich,” he said.

“Our money and wealth is like the toy money in a children’s game: It may buy goods in our human economies which seem so powerful, but in the economy of God it is worthless. We are only truly rich when we accept mercy from God, through Christ our Savior,” he said.

Christians are called to be rich in God’s mercy by listening to him in the voice of the poor, by partaking in the Eucharist, by coming to him through his mercy.

“We are to be those who enable others to be merciful to those with whom they are in conflict. We are called to be Christ’s voice to the hopeless, calling, ‘come to the waters’ in a world of drought and despair, giving away with lavish generosity what we have received in grace-filled mercy,” Archbishop Welby said.

Patriarch Bartholomew commented on the second reading from the book of Revelation in which God calls “all who are thirsty come: all who want it may have the water of life, and have it free.”

Christians from around the world, he said, answered God’s call in Assisi “to invoke the Lord for the greatest of his gifts — peace — from him, the king of peace.”

Jesus comes to all who thirst for peace, he continued. However, Christians must experience an inner conversion in order to listen to him through “the cry of our neighbor,” to experience a true conversion and to give prophetic witness through fellowship. 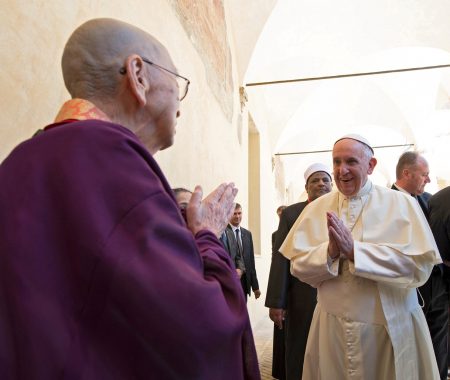 Pope Francis gestures as he arrives for an interfaith peace gathering at the Basilica of St. Francis in Assisi, Italy, Sept. 20. (CNS photo/L’Osservatore Romano handout via Reuters)

“Then we shall offer living water to the thirsty, endless water, water of peace to a peaceless world, water that is prophecy, and all shall listen to Jesus, who will thrice say: ‘Surely I am coming soon,'” Patriarch Bartholomew said.

In his meditation, Pope Francis reflected on Jesus’ words on the cross, “I thirst,” which he said was not only a thirst for water but also for love.

Like St. Francis of Assisi who was upset by the reality that “love is not loved,” the pope said Christians are called to contemplate Christ Crucified in those “who thirst for love.”

He also recalled the example of St. Teresa of Kolkata, who asked that all Missionaries of Charity houses have Jesus’ words, “I thirst,” inscribed in their chapels next to the crucifix.

“Her response was to quench Jesus’ thirst for love on the cross through service to the poorest of the poor,” Pope Francis said. “The Lord’s thirst is indeed quenched by our compassionate love; he is consoled when, in his name, we bend down to another’s suffering.”

In response to Jesus’ thirst, he said, Christians are challenged to hear the cry of the poor, suffering and the innocent victims of war.

Those who “live under the threat of bombs” and are forced to flee from their homes are “the wounded and parched members of his body, he said. “They thirst.”

However, all too often they are offered only “the bitter vinegar of rejection.”

Pope Francis called on Christians to be “trees of life that absorb the contamination of indifference and restore the pure air of love to the world.”

“From the side of Christ on the cross water flowed, that symbol of the Spirit who gives life so that, from us, his faithful compassion may flow forth for all who thirst today,” the pope said.