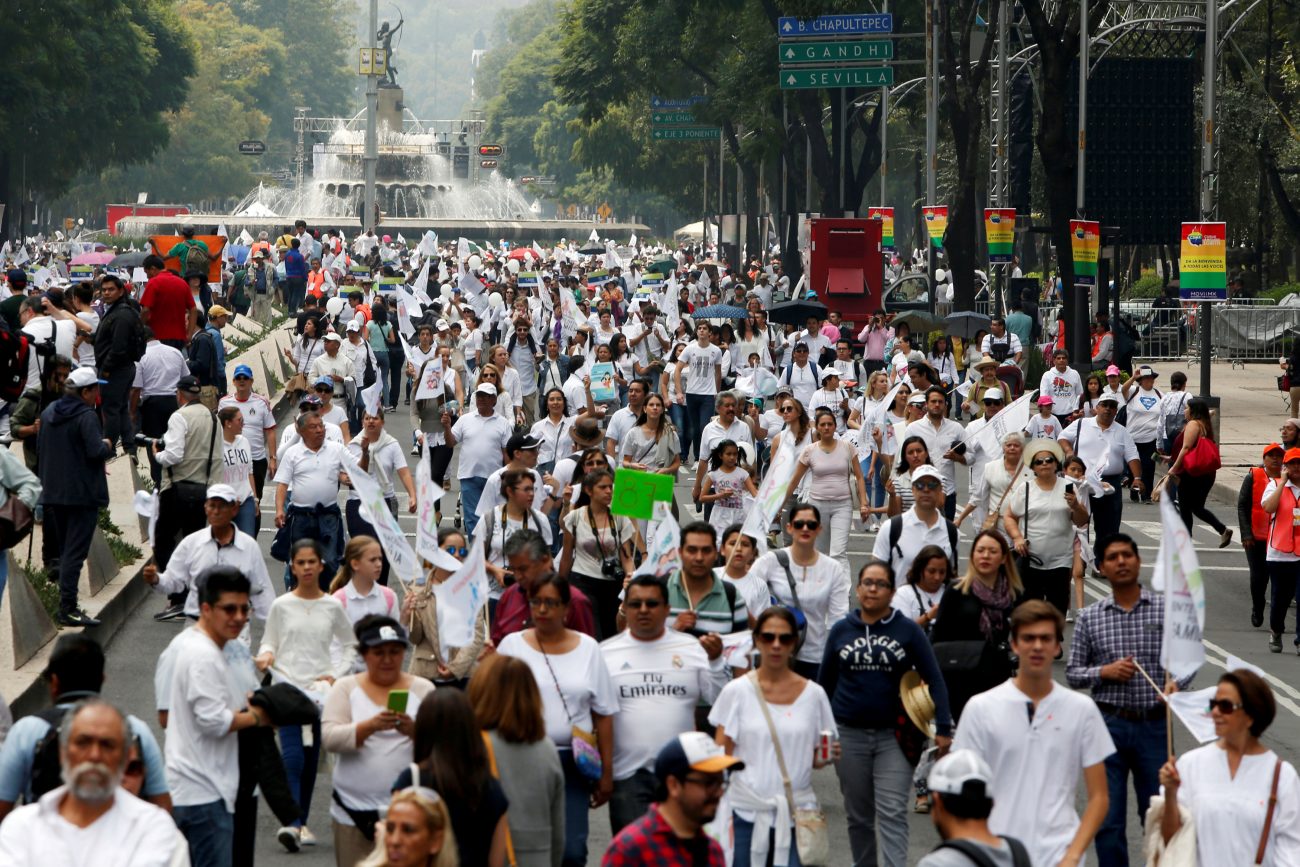 People arrive to participate in a march against the legalization of same-sex marriage Sept. 24 in Mexico City. (CNS photo/Carlos Jasso, Reuters)

MEXICO CITY (CNS) — Pope Francis’ endorsement of pro-family marches made headlines in Mexico, taking by surprise people who saw his speeches in the country in February as being critical of a conservative Mexican church hierarchy.

“Today Pope Francis has filled us with joy, he has said a few words … so that all those working in favor of the family feel heartened and comforted,” Mexico City Cardinal Norberto Rivera Carrera said at Mass Sept. 25.

The National Front for the Family estimated 215,000 protesters, coming from all corners of Mexico, marched in Mexico City, where a city government at odds with the local archdiocese has approved same-sex marriage laws and the decriminalization of abortion over the past decade.

Local officials put the number of protesters at 19,500, while a smaller number attended a counter protest ending at the iconic Angel de la Independencia monument, which city officials lit up the night before in rainbow colors.

Reciting the Angelus prayer in St. Peter’s Square at the Vatican Sept. 25, Pope Francis said he was “very happy to associate myself with the bishops of Mexico in supporting the commitment of the church and civil society on behalf of the family and of life, which in this time require special pastoral and cultural attention throughout the world.”

Speaking shortly before news was released of the discovery of the body of a third priest kidnapped and killed in the country, Pope Francis also said, “I assure the dear Mexican people of my prayers for an end to the violence that in recent days also has involved several priests.”

President Enrique Pena Nieto submitted a bill to Congress in May, seeking approval for same-sex marriages nationwide, while also changing educational materials to include positive portrayals of gay couples and nontraditional families. The president’s own party, which holds a majority in the lower house of Congress, has shelved the initiative, saying the time is not right to proceed.

At the Mexico City protest, Eduardo Hernandez, a taco stand owner from the city and father of three, marched with a sign reading, “No to the imposition of gender ideology.”

“Society has never protested like this before because they’re imposing this (marriage initiative) on the family,” he said.

“They want to inculcate these things in our children,” said Octavio Vazquez, a cellular phone repairman and member of a Mormon church in the central state of Hidalgo. “I want my sons to give me grandchildren of my own bloodline, something that homosexuals cannot do.”

“Family is the seed from which society grows,” says Isabel Carrillo, a small business owner and mother of two. “If the family is strong, society is, too.”

The Mexican bishops’ conference blessed the National March for the Family, which included protests Sept. 10 in more than 100 cities and culminated in the Mexico City march Sept. 24. Bishops in some cities participated in the protests, though many dioceses stayed out of the organization and only lent moral support.

“I wouldn’t dare to say the (National Front for the Family) position is a majority among Catholics,” said Pablo Mijangos Gonzalez, historian at the Center for Research and Teaching of Economics. “I think it’s a militant minority, but broad enough to have political weight.”

Some Catholics questioned why the church leadership was so actively protesting same-sex marriage, while staying mostly silent on issues such as crime and corruption.

“By saying gay marriage is more of a threat to Mexico than violence or narcotics trafficking” — as some local church spokesmen have said — “this puts clergy in the middle of the political arena and the faithful, too,” said Ilan Semo, historian at the Iberoamerican University.

The National Front for the Family said in a statement it would organize as a nongovernmental group and pursue an initiative to constitutionally prohibit same-sex marriage, even though the Supreme Court has ruled any prohibition on such unions discriminatory.