Sniffing out a good bishop: Improving the process is papal priority 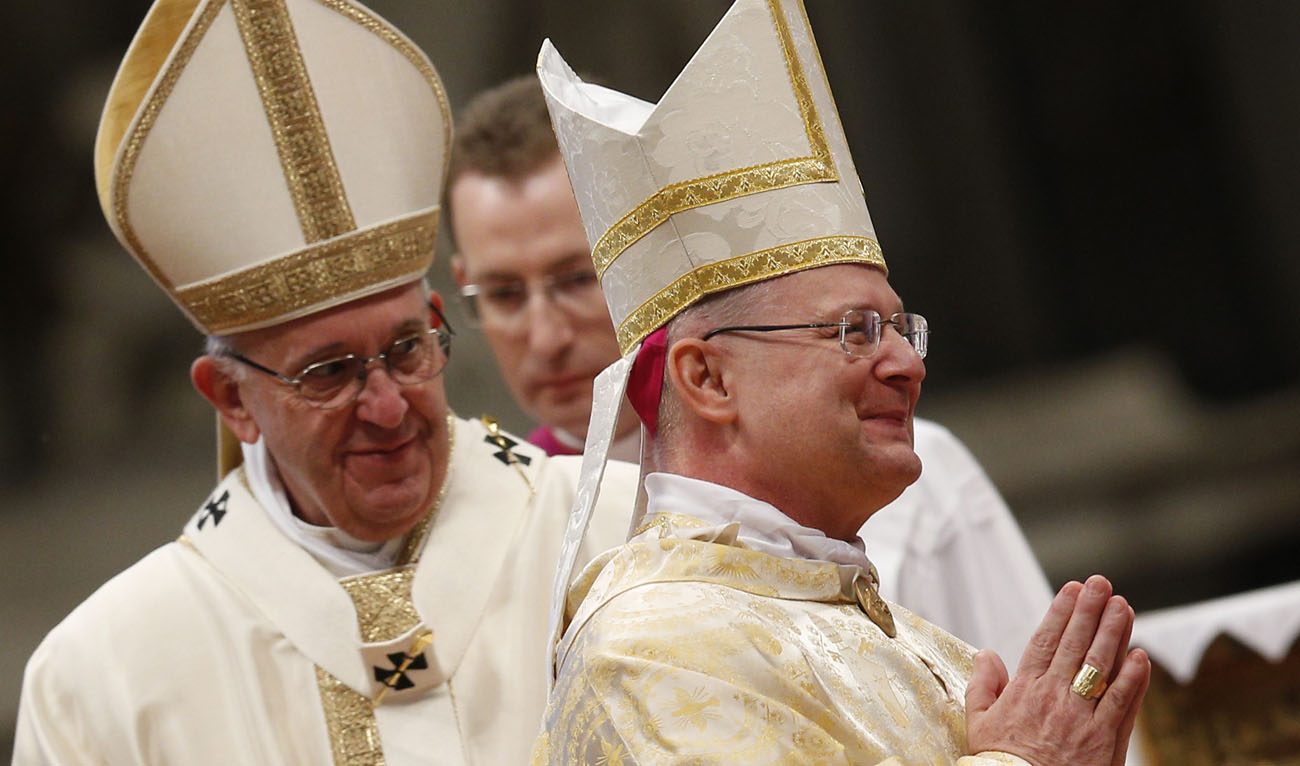 Archbishop Peter B. Wells, papal nuncio to South Africa, Botswana, Lesotho and Namibia, smiles during his March 19 ordination to the episcopate by Pope Francis in St. Peter's Basilica at the Vatican. (CNS photo/Paul Haring)

VATICAN CITY (CNS) — To say a bishop “smells like his sheep” is considered high praise today and is one of the top characteristics Pope Francis says he wants in bishops and candidates for the position of guiding a diocese.

But like many of the other traits Pope Francis says he is looking for, there is no foolproof smell test and, in fact, a variety of sheep with varied scents are present in most dioceses.

Pope Francis’ instruction — almost a plea — to the world’s apostolic nuncios Sept. 17 to “cast the nets” wider when identifying potential new pastors for a diocese and his continuing discussion with his international Council of Cardinals about “the spiritual and pastoral profile necessary for a bishop today” make it clear that providing good shepherds for every diocese is a responsibility the pope takes seriously.

The bishops of an Eastern Catholic synod or a Latin-rite province — usually an archdiocese and several surrounding dioceses — regularly study the names and curriculum vitae of priests mentioned as potential bishops and vote on whom to recommend. The information collected and the vote are sent to the nuncio.

The nuncio conducts his own investigation, including by sending a confidential questionnaire to 20-30 people who know the potential candidate. Improving the questionnaire was a specific topic of discussion at Pope Francis’ meeting in April with the Council of Cardinals.

U.S. Archbishop Thomas E. Gullickson, the Vatican nuncio to Switzerland, said the basic text “has not changed much since the close of the Second Vatican Council.” The questionnaire is modified slightly by each congregation to fit the needs, for example, of a missionary diocese or Eastern church and by the nuncio to fit country’s specific culture.

“Personally, I have been asking for a radical revision of the form for over five years,” the archbishop said in an email response to questions. “Some of the language of the council documents is no longer understandable to people and the questionnaire is much too long. People panic when they see two full pages of questions to answer in writing.”

The nuncios — archbishops who are sent to represent the pope and the Holy See both diplomatically with a government and pastorally with the local church — solicit a report on the state of a vacant or about-to-be vacant diocese, collect the completed questionnaires, evaluate them and send their recommendations to the Vatican. Their missives take the form of a “terna” — a list of three names, but with an indication of whom the nuncio thinks is best suited for the ministry.

For Latin-rite dioceses, officials at the Congregation for Bishops study the material and, usually twice a month, members of the congregation discuss it and vote for a candidate. The prefect, currently Canadian Cardinal Marc Ouellet, presents the congregation’s recommendations to the pope, who approves them or asks for other options.

“It is probably the most important work entrusted to a nuncio,” Archbishop Gullickson said. “In countries with a large episcopate, the job can be all-consuming; in a small country with less than 10 bishops, not so much.”

When he met the nuncios Sept. 17, Pope Francis asked them to find ways to broaden the search for candidates. Certain that God continues to provide for his church, the pope told the nuncios not to “go fishing in an aquarium” or seek candidates only on the “barnyard of ‘friends of friends.'”

“The Holy Father’s image is very suggestive when understood correctly,” Archbishop Gullickson said. “He wants us to avoid the abuse of allowing a clique or simple convenience to dictate the candidates for the office of bishop.

“The challenge of ‘casting your nets wide,’ however, is not to trust your own personal judgment, but to consult diligently and do so discreetly and with reliable witnesses, with those who really know the potential candidates,” he said.

But that is not easy, the archbishop said. “I remember years ago Pope St. John Paul II urging one of my nuncios to seek other sources of candidates. The nuncio worked hard, but he failed for lack of dependable and thoroughly knowledgeable witnesses. Sometimes laypeople can be lifesavers when it comes to judging candidates, but usually the average man or woman in the pew has very little knowledge of the parish priest. In religious communities and sometimes among diocesan clergy, petty jealousy or scrupulosity will make for too negative a picture of a candidate.”

For more than three years, Pope Francis has been saying he wants bishops who: are close to and committed to their people; embrace poverty and live simply; are men of prayer and of the church; are not content to stay in the chancery, but go out in search of people in need; and are not managers, but pastors.

But, in an early 2014 speech to members of the Congregation for Bishops, the pope said no “list of human, intellectual, cultural and even pastoral qualities” will provide an “algebraic sum” adding up to the perfect bishop.

While nuncios will not have a precise list of qualifications like a corporate “head hunter,” the pope told them in September, the right men are out there. “Go out and find them.”

NEXT: Pope approves statutes for his united Secretariat of Communications