With Chaldean Catholics, pope prays for peace in Syria, Iraq 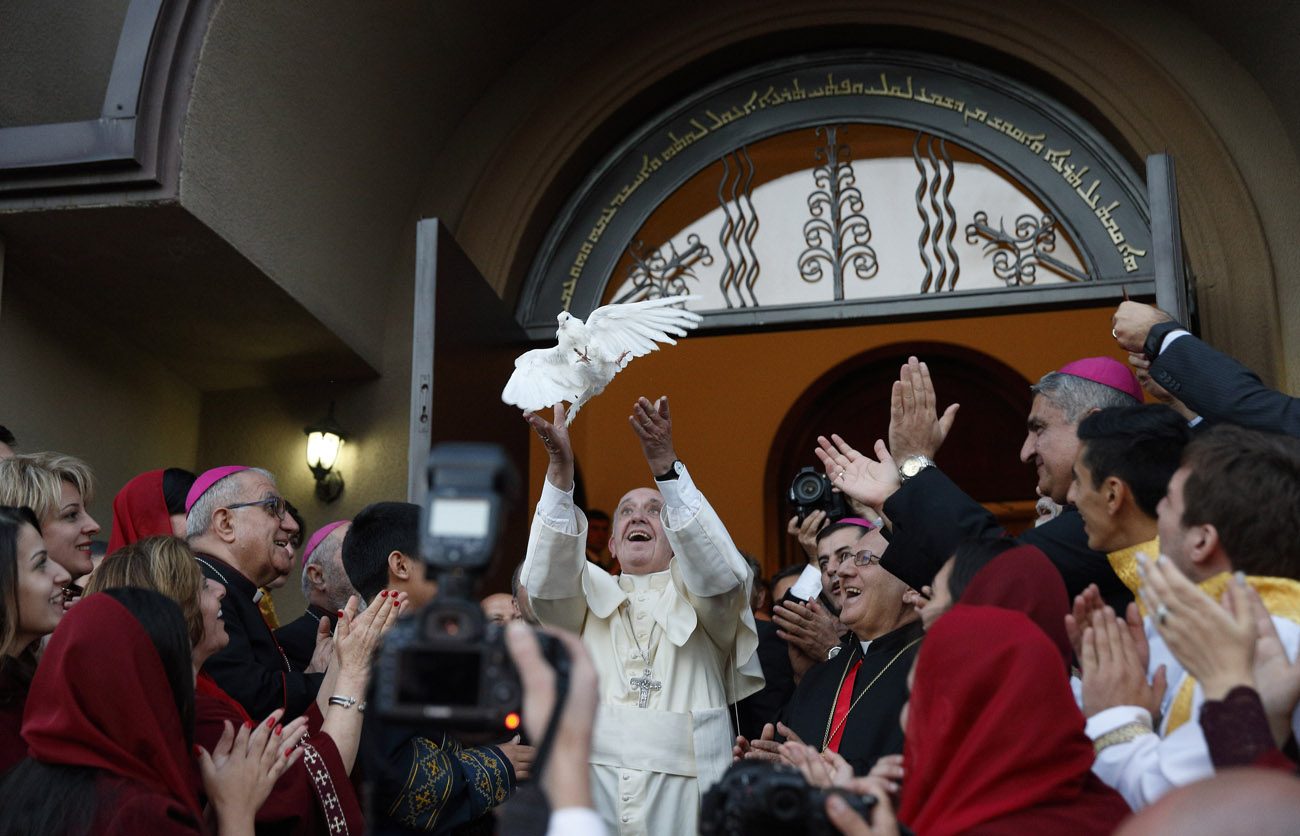 Pope Francis releases a dove after a meeting with Chaldean Catholics at the Church of St. Simon the Tanner in Tbilisi, Georgia, Sept. 30. (CNS photo/Paul Haring)

TBILISI, Georgia (CNS) — At a brief prayer service with Chaldean Catholics in Georgia, Pope Francis pleaded with God to grant peace to persecuted Christians and the victims of war, especially in Syria and Iraq.

With 300 people squeezed into the small Chaldean Church of St. Simon the Tanner Sept. 30, Pope Francis joined representatives of the Chaldean community who have lived in Georgia for generations, but also most of the Chaldean church’s bishops, who came from Iraq, Syria and throughout the Middle East to pray with the pope.

Chaldean bishops and donors from the United States also were present; they provided much of the money to build the Church of St. Simon, which was consecrated in 2009.

Patriarch Louis Sako of Baghdad led the formal prayers, which were chanted in Aramaic.

Pope Francis did not preach at the service, but recited a prayer composed for the occasion, asking the crucified Jesus to free humanity from “every division and evil” and to bring about his “kingdom of justice, joy and peace.”

“Save the victims of injustice and maltreatment from their suffering,” he prayed.

Pope Francis prayed that Jesus would transform the suffering of “the many innocent victims: the children, the elderly and the persecuted Christians” and heal the wounds of “abused persons, deprived of freedom and dignity.”

Asking God to help people everywhere learn “the way of reconciliation, dialogue and forgiveness,” he offered special prayers for “exiles, refugees, and those who have lost the joy of living.”

“Let the peoples so wearied by bombing experience the joy of your Resurrection,” he prayed. “Raise up Iraq and Syria from devastation.”

At the end of the service, which lasted less than 45 minutes, Pope Francis went outside and released a dove.

NEXT: Chaldean Catholic bishops call for peace in Iraq, Syria