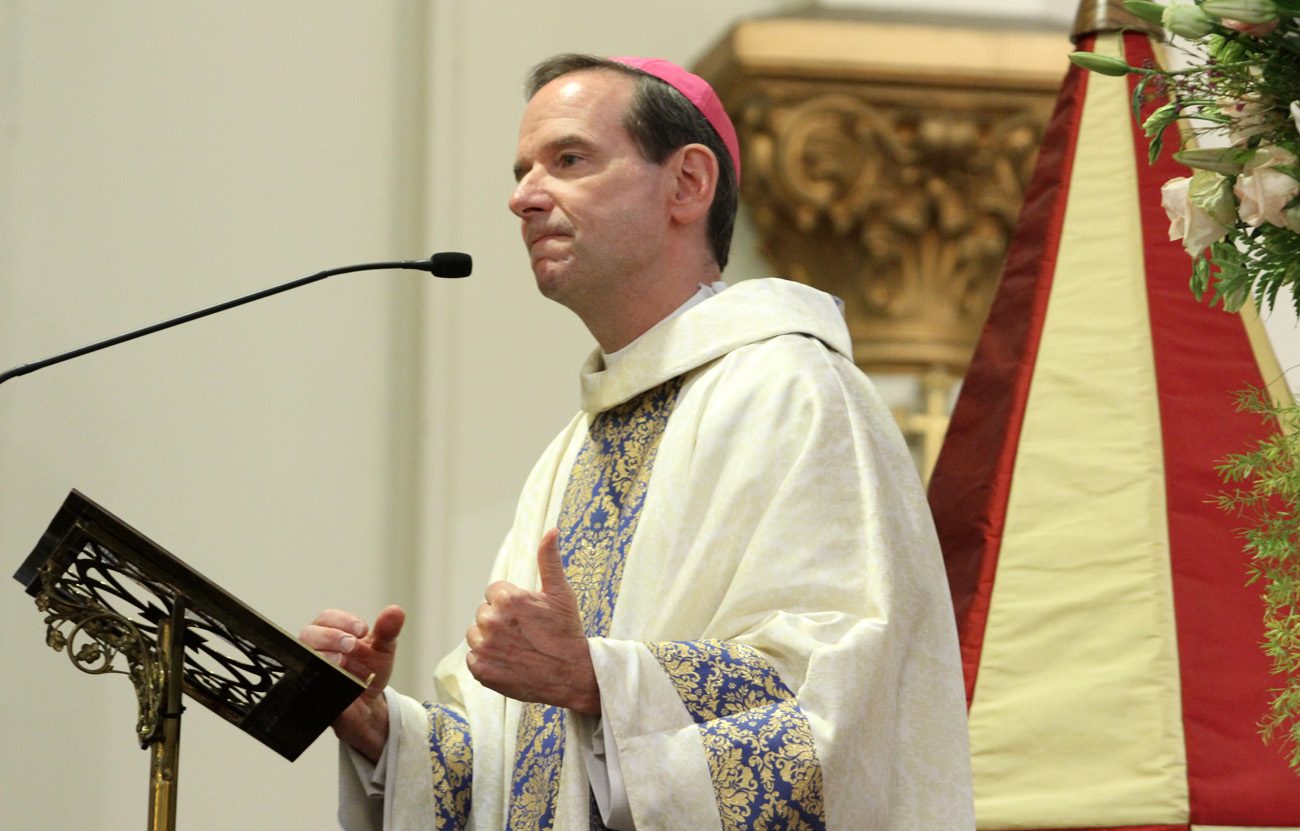 Bishop Michael F. Burbidge of Raleigh, N.C., delivers the homily at a 2014 Mass at the Basilica of the Sacred Heart of Jesus in Atlanta. (CNS photo/Michael Alexander, Georgia Bulletin) 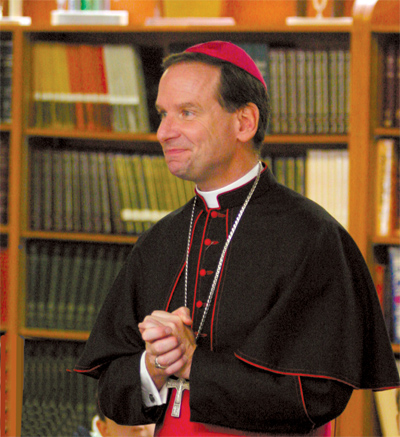 The pope also accepted the resignation of Archbishop Roger L. Schwietz of Anchorage, Alaska, and appointed Bishop Paul D. Etienne of Cheyenne, Wyoming, to be his successor.

The changes were announced Oct. 4 in Washington by Msgr. Walter Erbi, the charge d’affaires at the apostolic nunciature to the United States.

He will be installed as Arlington’s fourth bishop Dec. 6 at the Cathedral of St. Thomas More in Arlington.

Both Archbishop Schwietz and Bishop Loverde are 76. Canon law requires bishops to submit their resignation to the pope at age 75.

In an early morning tweet shortly after his appointment became public, Bishop Burbidge told the Catholics of the Raleigh Diocese: “Thank you for all your love and support. You will always have a special place in my heart. Let us pray for each other.”

And to Catholics in his new diocese, Bishop Burbidge tweeted: “I am honored to be your new bishop and will love and serve you with the strength that comes from God. Pray for me!”

Born June 16, 1957, in Philadelphia, Michael Burbidge studied at St. Charles Borromeo Seminary. He holds master’s degrees in theology, administration and education, and has a doctorate in education.

After his priestly ordination he served as dean of formation and eventually rector of St. Charles Borromeo Seminary (1999-2004), and administrative assistant to the archbishop. He also served on the board of seminary admissions, the priests’ personnel board and on the priests’ council.

Bishop Loverde, who was born in Framingham, Massachusetts, was ordained a priest for the Diocese of Norwich, Connecticut, in 1965. He was named an auxiliary bishop of the Archdiocese of Hartford, Connecticut, in 1988, and was ordained a bishop in April of that year. In November 1993, he was appointed bishop of the Diocese of Ogdensburg, New York, and was installed in January 1994. He served there until his appointment as bishop of Arlington.

The Diocese of Arlington covers 6,500 square miles in Northern Virginia. Out of a total a population of 3.2 million people, about 458,000 or 14 percent, are Catholic.

Archbishop Etienne, 57, has headed the statewide Diocese of Cheyenne since December 2009.

“In this Year of Mercy, on this feast day of St. Francis, I ask for your prayers, that our world may experience the peace that was his signature hallmark,” Archbishop Etienne said in an early morning post to his blog on the Cheyenne Diocese’s website. “I also ask for your prayers that this same peace may fill my own heart, along with the hearts of the people in Wyoming and Alaska.”

Writing from Anchorage, where he said he had arrived the evening of Oct. 3, the archbishop said: “Today, I turn my attention to the people of God of this ‘great land’ of Alaska. However, as I write this entry, I simply wish to say to the holy, faithful people of God in Wyoming: ‘I love you.’ In time I will return to you for a brief period to celebrate with you the seven years we have spent together building up the kingdom of God. Please know of my profound gratitude for your faith, love and support. You are wonderful!”

Born June 15, 1959, in Tell City, Indiana, Paul Etienne attended the Pontifical North American College in Rome and he holds bachelor and licentiate of theology degrees from the Pontifical Gregorian University, also in Rome.

He was ordained a priest for the Archdiocese of Indianapolis in 1992. After ordination, he served in several Indianapolis parishes, and was director of vocations for the archdiocese.

PREVIOUS: Use of death penalty re-examined in the states, at Supreme Court

NEXT: Seven Catholic institutions will divest from fossil fuel companies