By laughing at ourselves, we grow, change for better, says actress-writer 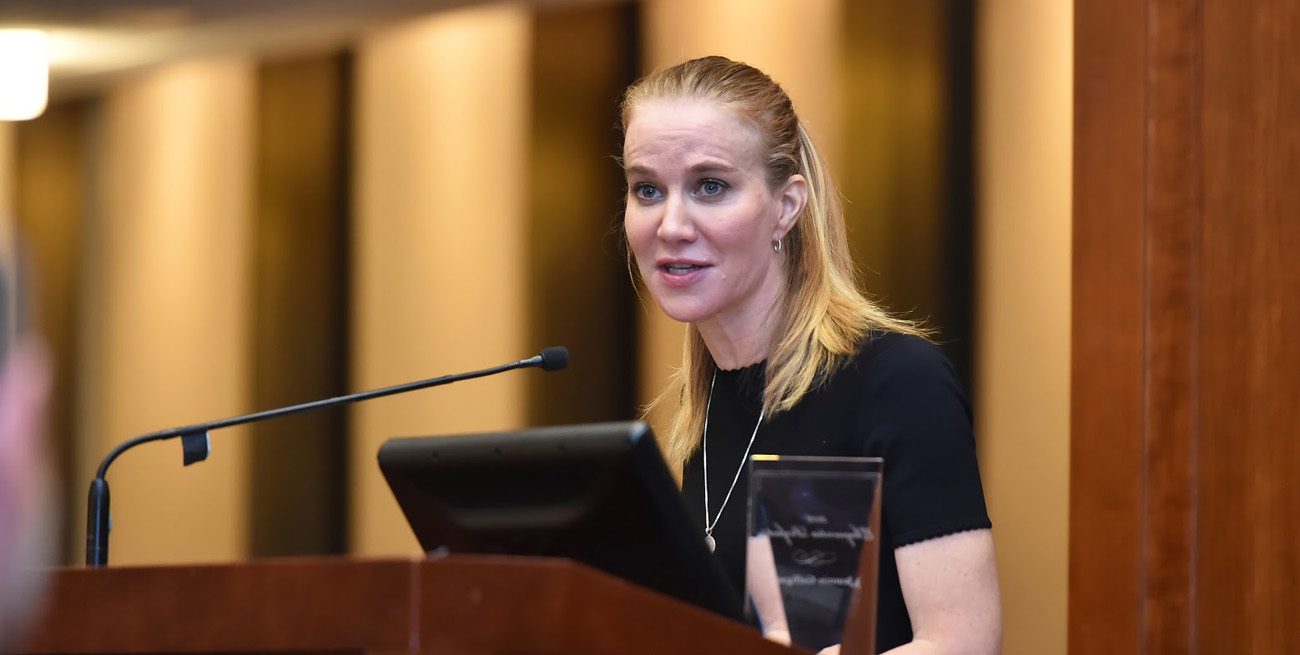 NEW YORK (CNS) — Laughing at ourselves and being open to sharing our failures and flaws within and beyond the community of faith is a powerful means to dispel the myth that Catholics are ignorant or judgmental or exclusive in any way, actress Jeannie Gaffigan told an audience in New York Oct 14.

The comedy writer and producer of “The Jim Gaffigan Show” accepted the inaugural Eloquentia Perfecta Award from Paulist Press and the Fordham University Graduate School of Religion and Religious Education.

The actress, who is the wife of comedian Jim Gaffigan and mother of their five pre-teenage children, said her Catholic faith and Jesuit education inform and inspire the scripts she co-writes for her husband’s comedy specials and his series on the TV Land cable network.

She said the couple tries, “in our own imperfect way, to present a household of faith in one of the most culturally diverse places in our country.” The television show is loosely based on their experiences working in the comedy field and raising children in a two-bedroom apartment in New York.

“The show invites its audience on a journey through familiar conflicts in faith, family and career and attempts to bring the entire community together in showing ourselves as flawed characters that must rebound with resilience from the hardships we all face in life,” Gaffigan said.

“When we laugh at ourselves, we can grow and change for the better,” she said. It is a way to share what people have in common and is vital to the growth of the culture.

Gaffigan said working on a small cable network allows them to depict a family whose faith is central to its respect for, and interactions with, people they care about despite enormous disagreements and differences. “We’re trying to do what is good and keep a sense of humor and humility along the way,” she said.

“Nobody likes a preachy story,” Gaffigan said. The process of resolving the dichotomy between words and deeds can become a gentle teaching opportunity where they can share their faith and “shed light on the silliness of the culture wars,” she said.

“If we are called to evangelize, it must be done creatively and subtly,” Gaffigan said.

The two groups that established the Eloquentia Perfecta Award are celebrating anniversaries in 2016. Fordham University was founded by the Jesuits 175 years ago and Paulist Press is marking 150 years in the publishing business.

“Eloquentia Perfecta” refers to a Jesuit educational tradition that values excellence in writing and speaking with logical clarity.

Paulist Father Mark-David Janus, president and publisher of Paulist Press, told Catholic News Service the award is intended to celebrate people in communications who take their vocation seriously, live their faith life and can serve as an inspiration to others.

Fordham University’s president, Jesuit Father Joseph M. McShane, said the Gaffigans “are proudly and publicly Catholic. Their faith is a part of their identity and shapes their creative work.”

He said Jeannie’s humor is sly, gentle, illuminating of the human condition, optimistic and very funny. “She renders family life with wit, intelligence, and self-awareness. Her work allows people to reconnect with themselves in a way that is at once entertaining and compassionate,” Father McShane said.

C. Colt Anderson, dean of the Graduate School of Religion and Religious Education, said Gaffigan’s humor is funny without being mean, and is never sappy, preachy or moralistic, which is why it’s perfect for our time.

The Eloquentia Perfecta Award also was given to an undergraduate to encourage pursuit of excellence by a student who shows extraordinary promise, Father Janus said.

Anderson presented the inaugural award to Caitlin Sakdalan, a Fordham University junior in the communication and media studies program. He said she hopes to be a respected food connoisseur and have a television show on food, travel and philanthropy.

The evening award presentation was followed the next day by a conference on “Communication as Vocation: At the Intersection of Media, Faith and Culture.” Father Janus said the event was intended to give students access to Catholic professionals in the fields of broadcast, music, theater, film, video and publishing.