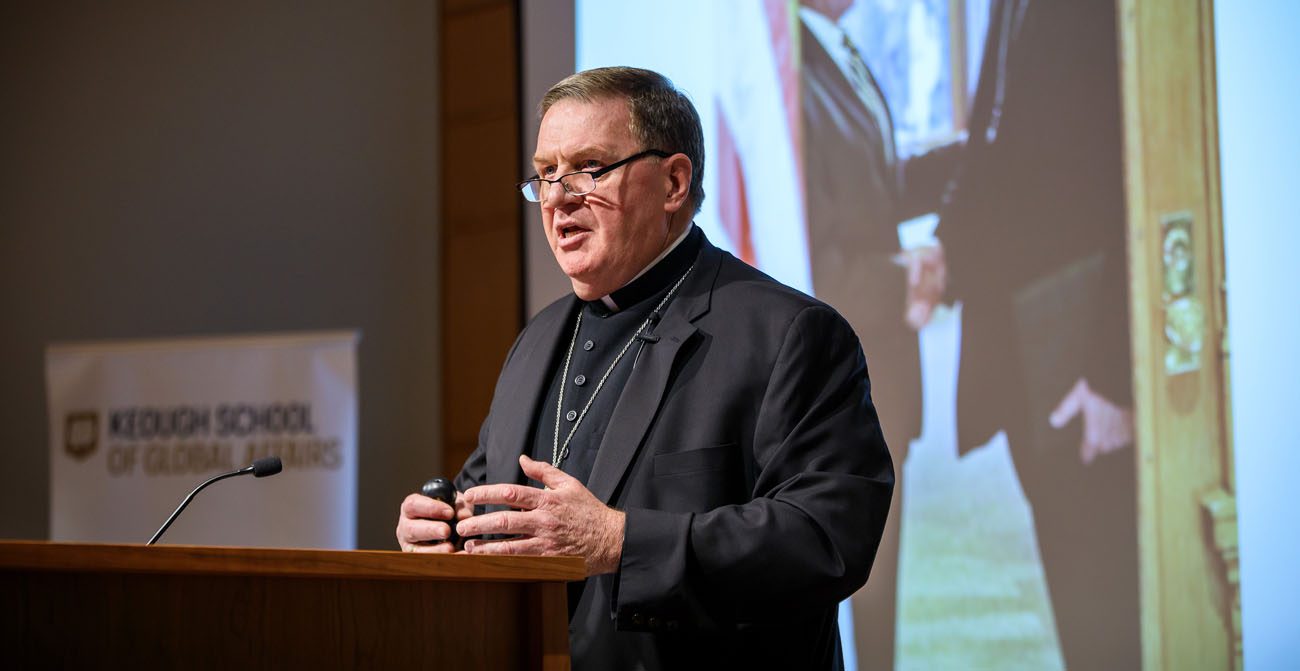 The family fled their homeland of Syria in 2012 and spent three years living in a refugee camp. During those years, surrounded by dismal conditions, the family underwent the rigorous scrutiny mandatory for those seeking refugee status in the United States, including security screening by the National Counterterrorism Center/Intelligence Community, the FBI, the Department of Homeland Security and the State Department.

The story of this family was told by Cardinal-designate Joseph W. Tobin of Indianapolis, who spoke at the University of Notre Dame Oct. 14, less than one week after he was named a cardinal by Pope Francis.

In the talk, “Welcoming the Stranger While Challenging the Fear,” the cardinal-designate discussed the history and current state of refugee resettlement in the United States, emphasizing the moral imperative that Americans welcome these neighbors as human beings and combat the prevalent fear, anxiety and hostility shown particularly toward individuals from the Middle East.

This family whose story the cardinal-designate told was scheduled, he said, to be welcomed by Catholic Charities of Indianapolis last October. But after Indiana Gov. Mike Pence’s statement of Nov. 16, 2015, that he would prevent refugees from settling in Indiana until the federal government could ensure property security measures were in place, the cardinal-designate was asked by the governor not to permit resettlement.

Cardinal-designate Tobin said the governor invited him to “pray and seek God’s guidance, which I gladly did.” The family was welcomed by the diocese and Catholic Charities and is now living in Indianapolis.

He said contemporary American society is imbued with a fear of welcoming refugees, a fear that is rooted in the “well-publicized threats of terrorist groups, particularly the Islamic State.”

This fear is perpetuated by the national media, he said, noting that “news programs use a hierarchy now in determining what stories to place before the public conscience. And, put rather vulgarly, ‘if it bleeds, it leads.’ News is a for-profit industry and, I would argue, one that doesn’t always strive to report the facts accurately. … Fear-based news stories prey on the anxieties we all have. … This attitude is particularly true in reporting facts from the Middle East.”

Another factor contributing to such fear, he said, is what he termed “boundary maintenance” or a reaction to globalization that generates fear of the other.

The cardinal-designate, when asking the audience how the Catholic community should react to this fear, quoted Archbishop Joseph E. Kurtz of Louisville, Kentucky, president of the U.S. Conference of Catholic Bishops, who urged “all Catholics in the United States and others of goodwill to express openness and welcoming to these refugees, who are escaping desperate situations in order to survive. Regardless of their religious affiliation or national origin, these refugees are all human persons — made in the image of God, bearing inherent dignity, and deserving our respect and care and protection by law from persecution.”

Cardinal-designate Tobin stressed that the federal government is responsible for immigration and refugee admissions to the United States and that governors ought to welcome refugees: “We need to encourage governors to continue to play their important welcoming role,” he said.

The cardinal-designate said the initial needs of refugees “are many, as you can imagine: food, shelter, employment, English as a second language and orientation to a new culture.”

He also encouraged the audience to reach out to a local refugee resettlement agency, saying the work at Catholic Charities would be impossible without volunteers.

Gettinger is on the staff of Today’s Catholic, newspaper of the Diocese of Fort Wayne-South Bend.

PREVIOUS: By laughing at ourselves, we grow, change for better, says actress-writer

NEXT: Leaked emails show ‘hostility’ to Catholic Church, some say