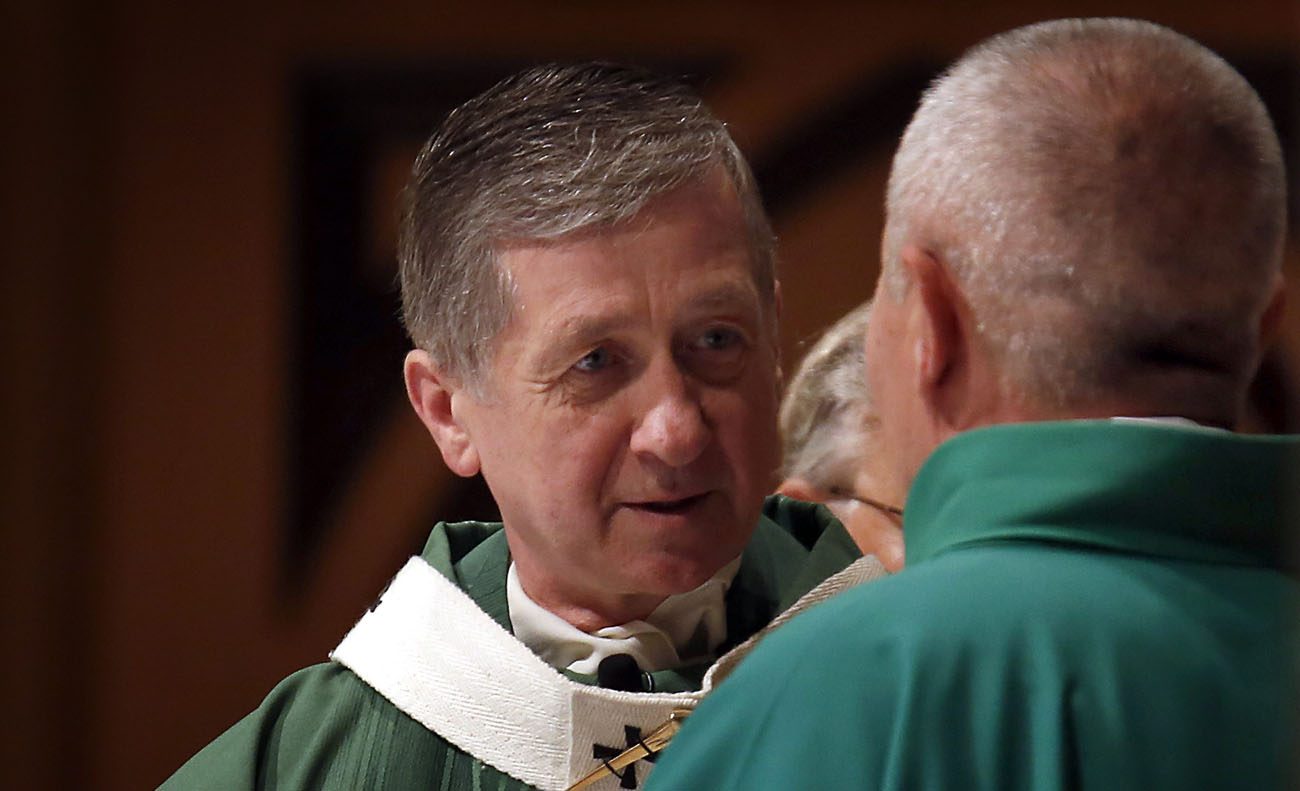 Cardinal-designate Blase J. Cupich of Chicago shares the sign of peace with a priest during Mass Oct. 9 at Holy Name Cathedral. Cardinal-designate Cupich was one of 17 new cardinals named by Pope Francis that day. (CNS photo/Karen Callaway, Catholic New World)

CHICAGO (CNS) — Archbishop Blase J. Cupich greeted the congregation at Holy Name Cathedral Oct. 9 with quips about the other news in town — the Chicago Marathon and the Cubs’ second playoff win — before acknowledging the news that he had been appointed to the College of Cardinals by Pope Francis.

Cardinal-designate Cupich, who was appointed archbishop of Chicago in 2014, said he was “deeply humbled” by the pope’s decision announced earlier that day that he would be joining 16 other new cardinals, including two from the United States: Cardinals-designate Kevin J. Farrell, prefect of the new Vatican office for laity, family and life; and Joseph W. Tobin of Indianapolis.

In a brief news conference Oct. 9 following 11 a.m. Mass at the cathedral, the archbishop also said he is encouraged by his appointment. Asked if the pope sent a message with his appointment, Cardinal-designate Cupich said he heard that question frequently when he was named archbishop.

“I responded that the pope was sending not a message but a pastor,” Cardinal-designate Cupich said.

Now, he said, he hopes he and the other cardinals can help Pope Francis in his mission. The root of the word cardinal is the same the root of “cardio,” meaning heart, and that demonstrates how close cardinals are to be to the chair of Peter, he said.

He added that he is honored to be in the company of the others who will be inducted into the College of Cardinals Nov. 19 at the Vatican.

As for changes in his daily life, he said the Archdiocese of Chicago remains his priority although his role as a member of the Vatican’s Congregation for Bishops, which he was appointed to this summer, will place some demands on his time. The congregation’s main job is to identify and propose candidates to become bishops in dioceses in the Americas, Europe, Australia and New Zealand.

Since there had been speculation that he might be named a cardinal soon, members of the congregation at the Oct. 9 Mass he celebrated at the cathedral were happy but not really surprised.

Andy Cwik, who regularly attends Mass at Holy Name, said: “I was surprised it was today, but in general, it was expected. The archbishop of Chicago has always been a cardinal.”

“I was wondering when it would happen,” Don Michorczyk told the Catholic New World, Chicago’s archdiocesan newspaper. “We’re back where we should be.”

But no diocese or archdiocese automatically has its bishop elected to the College of Cardinals. Some archdioceses who have had cardinals at the helm in the past no longer do, and some that have not have cardinals, such as the Archdiocese of Indianapolis, will now have one.

When he was asked when he learned the appointment had been made, Cardinal-designate Cupich said he was awakened by phone call from a friend in Rome shortly after 5 a.m. on a day he’d been intending to sleep in until 7 a.m.

“I was glad to get the phone call, but I missed those two hours of sleep,” he said. “While I’m pleased with this, I don’t really feel any different. I feel like I’ll be the same person I’ve always been.”

He had spoken with many members of his family morning the morning of Oct. 9, he told reporters, and he could assure them that at least one thing had not changed.

“They still treat me with the same lack of deference they always have.”

The 67-year-old cardinal designate, who is from Omaha, Nebraska, is one of nine children. He was ordained to the priesthood for the Archdiocese of Omaha in 1975 and served as pastor of two parishes in Omaha before he was appointed bishop of Rapid City, South Dakota, in 1998.

Twelve years later, he was appointed bishop of Spokane, Washington.

He serves on many U.S. Conference of Catholic Bishops’ committees, including the communications committee and the Committee on Ecumenical and Interreligious Affairs; he is co-chair of the National Dialogue Initiative with Muslims and the Subcommittee for the Church in Central and Eastern Europe.

The cardinal-designate is chancellor of the Catholic Church Extension Society and the University of St. Mary of the Lake Seminary in Mundelein and executive board member of the Catholic Mutual Relief Society.

Father Jack Wall, president of Catholic Extension, described the cardinal-designate in an Oct. 9 statement as “an extraordinarily gifted church leader” whose “vision and passion align closely with Pope Francis’ call for the church to ‘go out to the peripheries.'”

“We are delighted Pope Francis has recognized Archbishop Cupich’s invaluable contributions and leadership,” he said in a statement.

Inlander, who meets regularly with the cardinal-designate, also praised him for following the traditions of his predecessors in working to “strengthen Catholic-Jewish relations, reinforcing in the diocese the teachings of ‘Nostra Aetate’ and assertively combating anti-Semitism.”

NEXT: As outrage over lewd comments piles up, Trump struggles among Catholics