As outrage over lewd comments piles up, Trump struggles among Catholics 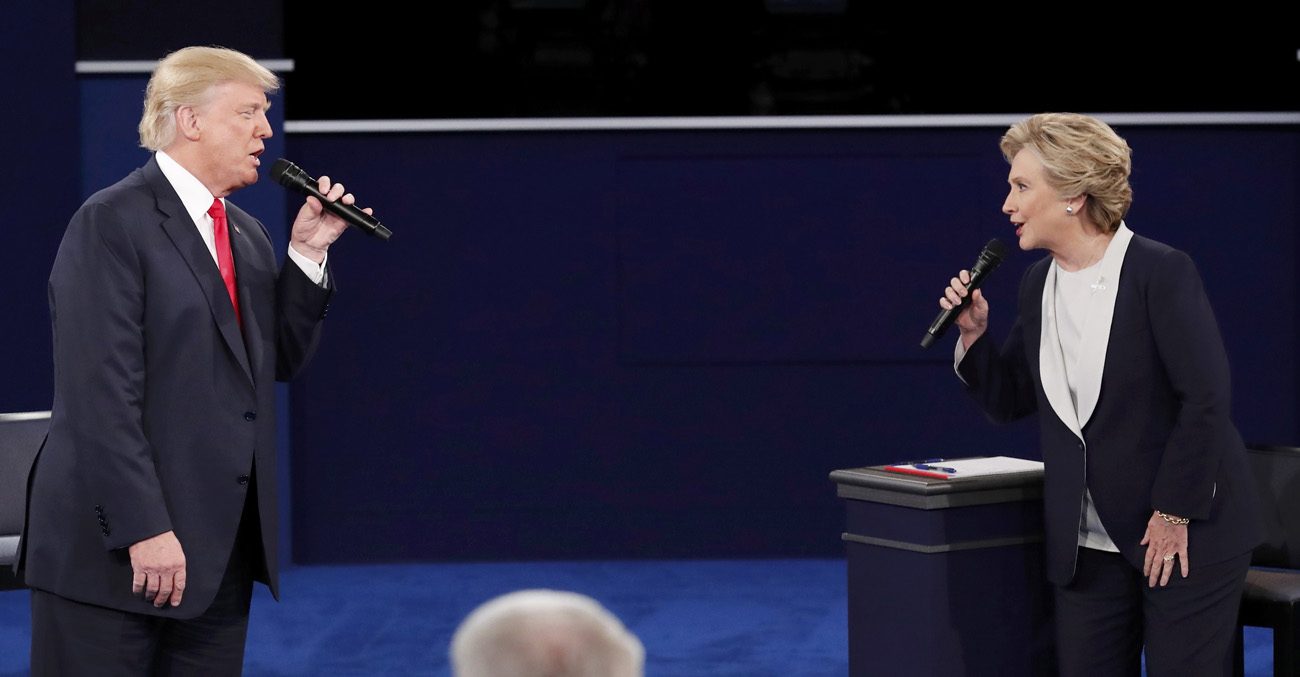 “Ever read ‘The Confessions’ of St. Augustine?” Giuliani asked John Dickerson, the host of “Face the Nation,” referring to the autobiographical book about St. Augustine’s sinful past and his subsequent conversion. “Men can change, people can change.”

Hours later, Donald Trump, the embattled Republican presidential nominee he was defending, was defiant in St. Louis during the second of three presidential debates against Democratic opponent Hillary Clinton. Trump spent the weekend dealing with public backlash, including watching members of his own party withdraw endorsements for his presidency following the release of various video and audio recordings where he is heard making lewd comments about women. In one of the recordings, Trump, who had been married for months to his third wife at the time of the incident, speaks of his intention to have sex with a different married woman.

Giuliani, who said that as a Catholic he understood contrition and the resolve to do better after a person has done something wrong, seemed like the lone political voice defending Trump. Republican House Speaker Paul D. Ryan, a Catholic, said he was “sickened” by Trump’s comments and withdrew his invitation from their first event together in Wisconsin and said a day after the debate that he “won’t defend” his party’s candidate.

The Boston-based group Catholic Democrats condemned Trump’s comments in an Oct. 8 press release and called on members of his Catholic advisory group to resign.

“As Catholics, we have a special obligation to make our voices heard when we see any individual use a position of power to sexually exploit another,” said Steve Kruger, the group’s president.

In response, two members of the advisory group, Father Frank Pavone, national director of Priests for Life, and Janet Morana, co-founder of the Silent No More Campaign, issued a statement saying: “Aside from saying ‘no, and hell no,’ we want to issue a call of our own. The members of Catholic Democrats should resign,” they said, for supporting the Democratic platform, “which undermines foundational aspects of church teaching.”

“We do not condone lewd words or actions in anyone’s personal life, or any mistreatment of women,” their statement said. “It is for that very reason that we are even more concerned that the Democratic Party institutionalizes morally offensive behavior, including abortion, homosexual activity, and the depraved view of human sexuality that is put forward by Planned Parenthood.”

Morana told Catholic News Service Oct. 11 that not only was she “not quitting” the advisory group but she planned to “work harder than before” to see Trump elected, stressing that his “locker room banter” was not as harmful as Clinton’s abortion stance.

She also called on people to forgive Trump, emphasizing that it is still the Year of Mercy and that he has apologized for his statements.

Morana emphasized that she was speaking only as a Catholic woman in leadership and was not representing the Silent No More Campaign.

Angela Flood, another member of Trump’s Catholic advisory board, told CNS in an Oct. 11 email: “I don’t condone or defend Donald Trump’s past taped statements that were released recently, but I accept his apology.”

Flood, a former communications director for the Archdiocese of Washington who is currently working for a consulting firm in Virginia, said she hoped members of Catholic Democrats were similarly outraged by leaked emails from the Clinton campaign that she described as “seething with disdain for us and our beliefs. They should all be ashamed. I don’t know how Catholic Democrats can condone such contempt for our faith.”

Others also said they felt they had no other option but to stick with Trump.

“I think his comments are utterly disgusting, but I have no other choice than to vote for him,” said Gail Buckley, who attended a meeting of the Catholic Leadership Conference in Denver in early October, where Trump sent a letter to Catholics gathered there saying: “I will be there for you. I will stand with you. I will fight for you” on pro-life and other issues.

Buckley, who is president of the leadership conference as well as president and founder of Catholic Scripture Study International, said she asked Clinton to also address the group, but her campaign declined the invitation. Buckley said she does not trust Clinton and “would never support a candidate who promotes abortion and same-sex marriage and threatens my religious liberty.”

Joseph Cella, founder of the National Catholic Prayer Breakfast, who serves as a liaison between a Catholic advisory group and the Trump/Pence ticket, said he found what Trump said “repulsive and undignified and cannot be condoned or defended,” but he also said that the Republicans were the only candidates who would “defend the right to life” as well as religious freedom.

In the debate, which was sprinkled with assaults from both sides, Trump reached out to those like Buckley and Cella, saying: “I am looking to appoint judges very much in the mold of Justice Scalia,” when the candidates were asked about their plans for nominating a Supreme Court justice to replace the conservative Catholic Justice Antonin Scalia, who died in February. It is a task that the next president will have to undertake and one that is high in the mind of many voters.

But Catholics, like much of the nation, remain divided as to what matters in this election. In June, the Public Religion Research Institute, or PRRI, released results of a survey that revealed, as CEO Robert P. Jones put it, “white (non-Hispanic) Catholic and Latino Catholics are in different universes” when it comes to issues that are important to them in the presidential election. One of the most important ones for Latino Catholics was immigration, an area that Clinton used to attack Trump in the debate.

“It’s not only women and it’s not only this video that raises questions about his fitness to be our president,” she said. “Because he has also targeted immigrants, African-Americans, Latinos, people with disabilities, POWs, Muslims, and so many others.”

Even before the debate and the airing of the video and audio, Trump seemed to be struggling with Catholics for their vote, according to a PRRI poll released in late August. The poll showed him down 23 points, 55-32, against Clinton.

“Trump is struggling with Catholic voters for a reason: Anti-immigrant nativism, crude sexism and making an idol of wealth are not Gospel values,” Gehring said to CNS in an email interview. “Pope Francis reminds us that building a culture of life isn’t about a single issue and that everything is connected. Catholics also want to hear about creating an economy of inclusion, dignity for refugees and addressing the way climate change disproportionately hurts the poor. These are central life issues.”

CatholicVote.org said a day before the debate that even though it didn’t endorse Trump, it defended a lot of his positions. In an Oct. 8 statement on its website it said that “in the recording, he brags about sexually assaulting women. Christians should not waste their breath defending them. The mere fact that this conversation is occurring in the context of a presidential campaign impoverishes us all.”

Sister Simone Campbell, a Sister of Social Service, who is executive director of the Catholic social justice lobbying organization Network, said in a statement: “We urge the candidates to step out of the gutter and focus on the pressing needs of our time.”

There wasn’t opportunity for real conversation during the debate and it was not centered on the “needs of the people,” Sister Campbell said, urging the candidates to present plans for governing that all can weigh.

Christopher J. Hale, executive director for Washington’s Catholics in Alliance for the Common Good, said the debate was “an absolute embarrassment to those of us who believe that politics can and must serve the common good.”

The people of the United States deserve better than what they got in the second debate and during this presidential campaign season, he said, expressing hope that the final debate in Nevada Oct. 19 will be better.

“While we’re stuck the vanity politics of small things, the nation is looking for serious dialogue about the issues that matter,” Hale said. “We heard very little towards that end. I hope the final debate will discuss a broader range of critical issues such as the dignity of life, the scandal of poverty, comprehensive immigration reform, and care for God’s creation, among others.”