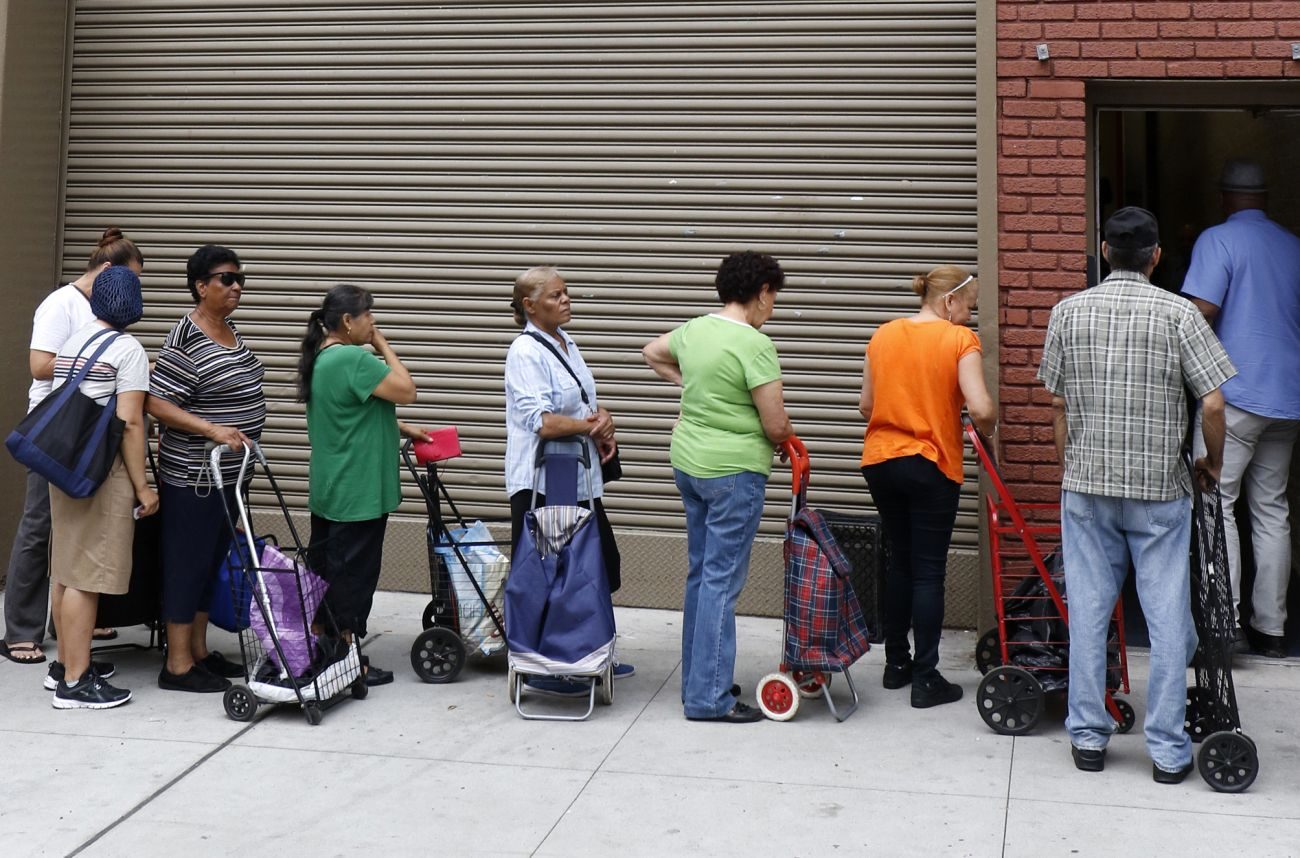 People wait to enter a food pantry at Catholic Charities of the Archdiocese of New York's community center in the South Bronx. (CNS photo/Gregory A. Shemitz)

WASHINGTON (CNS) — A significant minority of American families faced some form of economic hardship in the past year, according to the second American Family Survey, which was released Oct. 20.

“A large number of respondents faced some level of economic deprivation in the last year. About four in 10 delayed at least one thing like eating, paying bills or medical care or they required financial help — perhaps housing — from friends, family or other sources,” said the survey report.

“A similar number has only enough savings to survive a month or less — and this is correlated with but not completely determined by income, as some relatively high-income respondents also could not survive longer than a month,” the report added. “It is also the case that those who are less likely to have quite a bit of savings are also less connected to their neighbors and communities.”

Economic stability is one key to fruitful family life, according to the survey.

“Experiencing a stable marriage as a child is correlated with increased familial and economic stability as an adult,” it said. “Respondents whose mothers were continuously married to the same person throughout the respondent’s childhood are more likely to report being married today, less likely to say their relationship is in trouble, and less likely to have experienced an economic crisis in the past 12 months.”

The report said, “People generally believe that their local communities offer them decent options for education, but those who have experienced economic crises or who have less than a high school education are much less likely to think this.”

This phenomenon even plays out in presidential preferences, according to the survey report. People who expressed support for Donald Trump were “less likely to have experienced any kind of economic crisis in the last year” compared to supporters of other candidates, it said. In addition, those supporters were more likely to be male, more likely to be married, and more authoritarian in their attitudes.

Jeremy C. Pope of the Center for the Study of Elections and Democracy at Brigham Young University, which designed the survey, issued a mild rebuke to media reports of Trump followers coming from beaten-down factory towns in the American heartland.

“It’s important to keep the gender component in mind. People who like Trump tend to be men,” Pope said. “Not women. Women, they’re a bit more likely to support Trump if they haven’t experienced an economic crisis, but they’re still negative about Trump. I think it has been somewhat underreported. Trump supporters on average do not tend to be as impoverished as the coverage sounds like. Trump supporters tend to be somewhat above the median in income, although it’s not a massive difference.”

While economic issues were of lesser concern to survey respondents compared to culture issues and those surrounding family structure and stability, it was the only category to show across-the-board increases from 2015’s numbers.

“Economics became more of a concern. It’s not so much the numbers, but that it’s consistent across all four” questions, said Pope’s colleague, Christopher Karpowitz.

Of the 180 questions in the online survey, newer questions focused on the election but also on economics. “A meaningful percentage of Americans faced some serious economic challenges in the past 12 months,” Karpowitz told Catholic News Service.

Pope told CNS that survey respondents who have benefited from government social safety-net programs “see the benefit” from them, although Karpowitz noted, “Just having economic difficulty on its own does not automatically increase your love of the food stamp program.”

One discrepancy among survey respondents was their what Pope called their “judgmental” response that other families were “not teaching or disciplining their children sufficiently,” although they were satisfied with their own parenting skills.

The survey was commissioned by Deseret News and the Center for the Study of Elections and Democracy at Brigham Young University. Administered by YouGov, an international internet-based market research firm, the survey was taken by 3,268 respondents July 25-30, during the Republican and Democratic conventions. After weighting the responses to match U.S. demographic characteristics, the margin of error is plus or minus 2.48 percentage points.

NEXT: Sulpicians to leave San Francisco Archdiocese’s seminary after 118 years