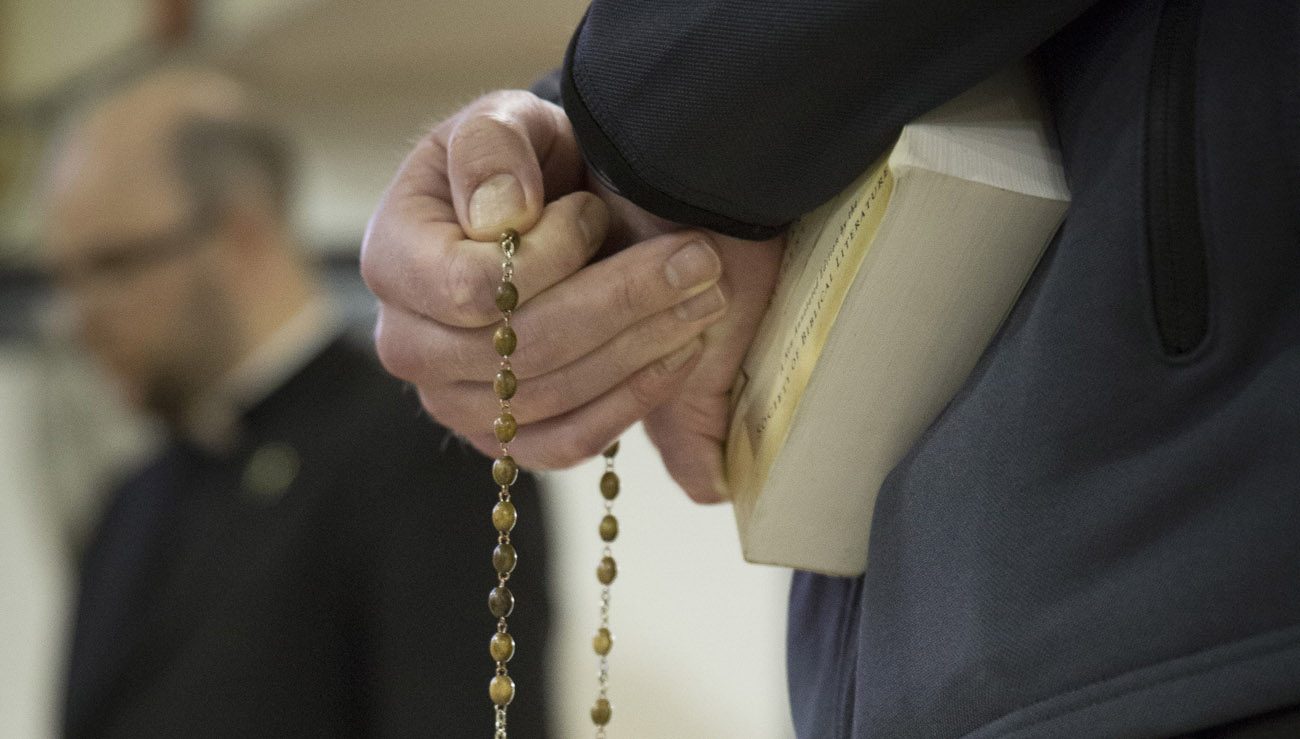 A seminarian from St. John's Seminary in Brighton, Mass., holds a rosary as he prepares to participate in a "Grill the Seminarians" discussion April 3 with members of a youth group from St. Patrick Church in Providence, R.I. Growing enrollment has prompted the Boston archdiocesan seminary to buy back space to accommodate the increase. (CNS photo/Chaz Muth)

BRIGHTON, Mass. (CNS) — Rapid growth in the number of men entering St. John’s Seminary in Brighton to study for the priesthood has prompted the Boston Archdiocese to buy back space from Boston College to accommodate the increase.

Msgr. James Moroney, seminary rector, signed a purchase and sale agreement with the Jesuit-run college Oct. 20 to buy back more than 13,000 square feet of space within the current seminary building.

“I am so very happy to be able to announce the purchase of the annex,” Msgr. Moroney said. “Right after I became rector of the seminary, one of the great dreams that both Cardinal (Sean P.) O’Malley and I began to articulate was the restoration of the seminary to a certain wholeness.”

By purchasing the annex, located above the present kitchen and refectory space, the current St. John’s Seminary buildings will now be owned “free and clear, without any leases or encumbrances of any kind” by the seminary, Msgr. Moroney said.

Built in 1884 by Boston Archbishop John Joseph Williams, the seminary had seen the number of seminarians dropping significantly, to an all-time low of 22 men studying for the priesthood in 2005.

“Having experienced, in the last 10 years, the most extraordinary growth the seminary has witnessed in its entire lifetime,” Msgr. Moroney continued, “we are in desperate need for space.”

He said in September, when the seminarians returned to St. John’s Seminary, there were 98 men living at the seminary.

“We had seven more men than space for them,” he said with a smile, adding that the St. John’s Seminary board of trustees purchased a neighboring house for additional space. The property, called Cheverus House, currently is home to seven of the 12 deacons at the seminary.

The annex became part of Boston College in the early 2000s. Having purchased St. Clement Hall, a building adjacent to the seminary, they asked St. John’s Seminary for additional rooms not being used. Because the annex had not been used since the 1960s, the seminary agreed to a 99-year lease on the facility.

With the signing of the purchase and sale agreement, Msgr. Moroney explained, St. John’s Seminary has bought back that 99-year lease.

“I doubt there’s been a month that has gone by since I became rector when Cardinal Sean and I have not spoken about this,” said Msgr. Moroney, who has been in the post since July 2012.

Msgr. Moroney noted that since the annex has not been used since the mid-1960s, the rooms “will have to be brought back to the studs” and remodeled. Currently, three different architectural firms have brought their proposals to the seminary’s board of trustees.

“There is enormous possibility that our newly returned annex can bring,” the rector said.

Tracy writes for The Pilot, newspaper of the Archdiocese of Boston.

NEXT: In Syria, danger and misery are abundant, but solutions are scarce