In Syria, danger and misery are abundant, but solutions are scarce 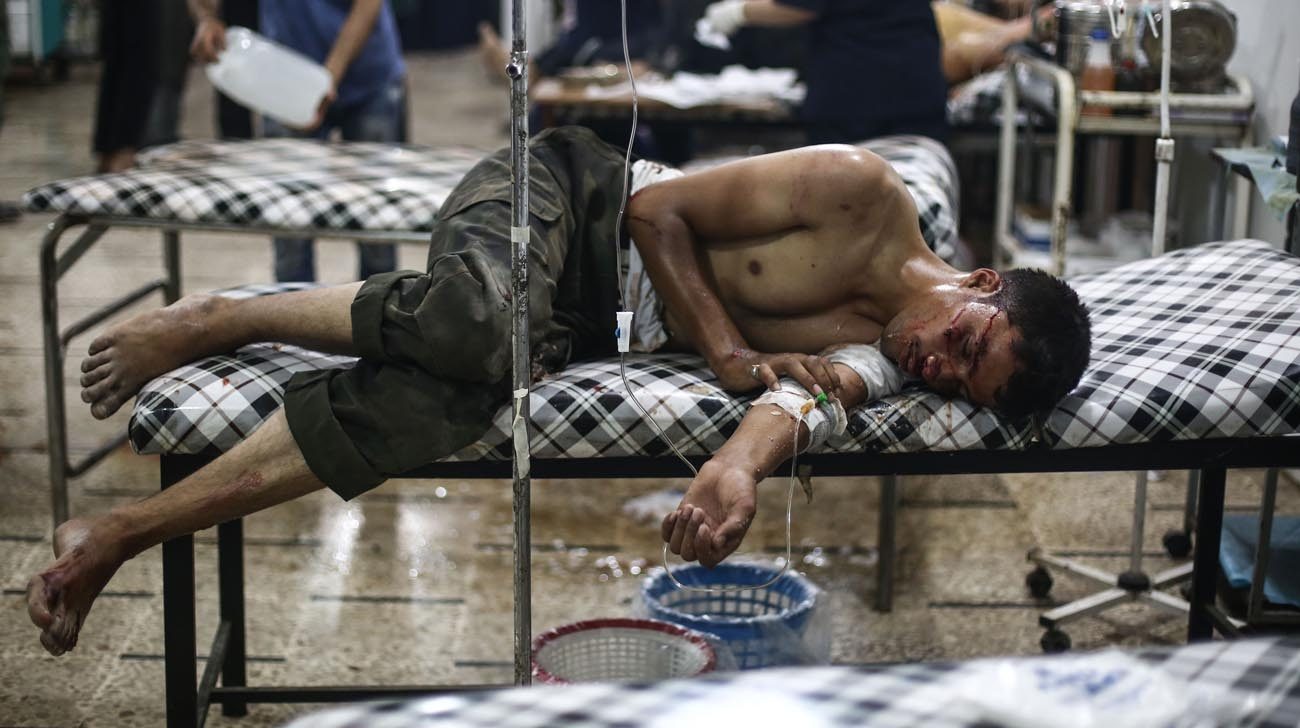 WASHINGTON (CNS) — There is only one word to describe the images coming out of Syria as the conflict advances: apocalyptic.

Aleppo, once Syria’s largest city and once known as its jewel, sits in rubble, but more tragically so do its people.

“The cradle of civilizations and the birthplace of Judaism, Christianity and Islam, the Middle East has become the theater of incredible brutality,” said Archbishop Bernardito Auza, the Vatican’s permanent observer to the United Nations in addressing the U.N. Security Council Oct. 19 about the deterioration of the situation. “The corpses under the ruins and the wandering refugees are a clear witness to this cynical contempt and trampling of international humanitarian law.”

U.N. Special Envoy for Syria Staffan de Mistura said to a group of European Union foreign ministers in Luxembourg on Oct. 17 said that “between now and December, if we cannot find a solution, Aleppo will not be there anymore.”

Images of children physically hurt or killed in the conflict have gone viral, prompting pleas this fall from Pope Francis, who said in an Oct. 12 general audience that he is “begging, with all my strength” for an immediate cease-fire that would allow the “evacuation of civilians, especially children, who are still trapped under cruel bombardment.”

Almost everyone agrees that something has to be done. Some worry that the repercussions of using force would only shift the violence toward other minority religious groups. Russia and the United States, two external players in the conflict — one supporting Syrian President Bashar Assad, the other mildly supporting the rebels — keep accusing each other of violating cease-fire agreements. Meanwhile, the nation’s leader keeps crushing those who want to see him gone, regardless of how it hurts innocent civilians caught in the middle. 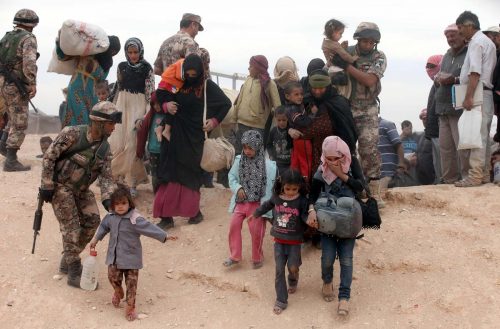 Syrian refugees arrive at a camp after crossing into the Jordanian side of the northeast Jordan-Syria border near Royashed. (CNS photo/Jamal Nasrallah, EPA)

Since the beginning of the conflict in 2011, Washington has been focused on an option that does not include military force even though President Barack Obama in 2013 said: “We have been very clear to the Assad regime, but also to other players on the ground, that a red line for us is we start seeing a whole bunch of chemical weapons moving around or being utilized. That would change my calculus. That would change my equation.”

Yet when the Assad regime was suspected of crossing that “red line,” not just once but twice, Washington was reluctant to use force. Secretary of State John Kerry has not-so-secretly expressed frustration with a policy that is not backed with any serious threat behind it. The U.S. has favored hammering out a political solution instead.

The U.S. Conference of Catholic Bishops and the Vatican have been urging an immediate cease-fire to allow humanitarian access to help civilians trapped in the conflict and called for the beginning of talks that would yield “inclusive governance,” meaning a new Syrian government that could represent the religious plurality of the country and include Christians, Sunni and Alawites, the religious minority that has supported the Assad regime, in the nation’s future governance, said Stephen M. Colecchi, director of the Office of International Justice and Peace at the U.S. Conference of Catholic Bishops in Washington.

“There is no military solution to the problem in Syria,” Colecchi told Catholic News Service. “The only ultimate solution has to be a political one.”

“I think that if the Alawites and Sunni and the Christians within Syria, if they all felt that their interests would be protected in a future Syrian government, they would be able to reach an agreement,” added Colecchi, who focuses on the Middle East for the USCCB. “Part of what’s pulling Syria apart are the external players that are fueling the conflict … and Syrians have paid the price of that.”

The United States, along with Russia, is one of those players, and with an election looming in November — and one that could yield a new political equation in Congress — it’s unclear what changes U.S. policy toward Syria will see, if any, under a new administration.

“I think the Christian community in Syria is profoundly afraid of a violent transfer of power in Syria, which then could lead to a further breakdown of a rule of law which then could be exploited by extremists,” Colecchi said. “I think they desperately want to see stability and a political solution.”

For its part, the Catholic Church, Colecchi said, has been busy providing humanitarian help, not just in Syria, but also to its refugees fleeing to neighboring countries.

On its website, CRS says that the conflict has seen the death of many as 400,000 Syrians since 2011, and has uprooted more than 11 million.

The Holy Land Franciscans in October released a video about their work in Syria, calling attention to the nation’s importance for Christianity: “Syria is the cradle of civilizations and Christianity after Jerusalem. Damascus is the place where St. Paul converted” to Christianity, they said in literature about the video, adding that the church had flourished there for decades. Christians once had made up about 30 percent of the population, while today it’s about 10 percent and dwindling because of the conflict. The Holy Land Franciscans said the “the friars will be there until the last Christian.”

Colecchi said Catholics should care about what’s happening in Syria because “they’re our brothers and sisters. And not just the large Christian community that lives in Syria, an ancient Christian community dating all the way back to St. Paul, but also because Syria is a rich culture and there are men women and children caught up in this horrific situation. We should care because there are people there who need our help.”

One also has to consider, Colecchi said, the pressure put on other nations to accommodate the refugees the conflict has yielded and who are flooding into Europe, but also into Lebanon, Jordan and Turkey.

“This is not just about Syria, this is about stability in the region and in the world,” he said.

And Americans, who often voice concerns about terrorism, should care, he said, because situations of desperation such as the one taking place in Syria give rise to extremism.

The pope, he added, may have been saying something when he recently designated Archbishop Mario Zenari, the apostolic nuncio in Damascus, a cardinal.

“I think it was a way of sending a signal, saying he was acknowledging the tremendous courage of this papal nuncio who remained within Syria at great risk to himself but also it’s a way of saying the church cares about the Alawites and the Sunnis and the Christians and others within Syria,” Colecchi said. “In a very direct way, that’s a symbol of a universal church that’s concerned for the welfare of Syria.”

NEXT: Rabid anti-Catholic views of late pamphleteer kept him marginalized