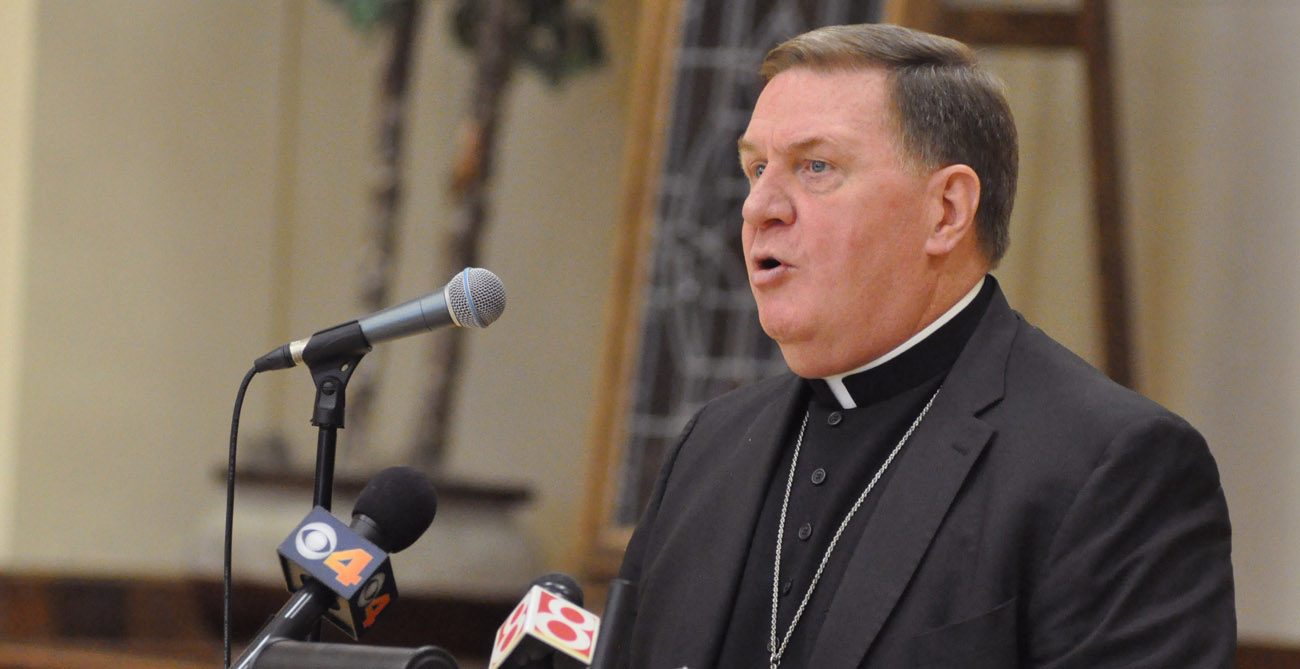 INDIANAPOLIS (CNS) — The “families” of Cardinal-designate Joseph W. Tobin showed their pride, joy and excitement following the Oct. 9 announcement that Pope Francis had chosen the archbishop of Indianapolis to be one of the Catholic Church’s 17 new cardinals.

Those families include his mother and siblings, fellow Redemptorists, parishioners and archdiocesan officials.

The pride and joy started with his mother, Marie, for the oldest of her 13 children. Since her son decided to become a priest, she said, she has prayed for only one thing through the years — for him “to be a good priest.” She believes God has answered that prayer.

“The older I get, my prayer changes to gratitude for what he’s done,” Marie Tobin, 93, told The Criterion, Indianapolis’ archdiocesan newspaper. “I thank the Lord and know he’s taking special care of him.”

She’s also thankful to Pope Francis for leaving her son in the archdiocese, noting that Cardinal-designate Tobin has “left part of his heart” in every place where he’s ministered.

“He so loves Indiana,” his mother said by phone from her home in Stoney Pointe, Ontario. “I would be afraid that he wouldn’t have heart left (if he had to leave.) I couldn’t imagine how sad he would be.

“I gave him to God a long time ago when he was ordained. And I know the Lord loves a cheerful giver. So I would be happy wherever he is, because I can’t go back on that.”

She said she planned to travel to Rome for her son’s induction into the College of Cardinals by Pope Francis in St. Peter’s Basilica Nov. 19.

The cardinal-designate’s sister Margo recalled their days of growing up together, including how they would play “Mass,” with the future cardinal being the priest and some of his sisters being the altar servers.

“I always look back to that and marvel that he knew then (about his vocation),” she said from her home in Grosse Pointe Woods, Michigan.

“We’re so proud of him. I know he can handle anything the Holy Father puts him up to,” she added. “Having him in Indianapolis is wonderful for him and for us. Over the past few years, we have gotten to know and appreciate the people of the archdiocese who have welcomed him so. It’s a wonderful place for him to be.”

Said his brother Jim, “He’s a great leader and a very humble person. I think the pope thinks a lot of him. People recognize what an impact he’s had on the church across the globe. No matter where he goes, he leaves a good path.”

Praise and pride also came from the Redemptorists, his religious order. Cardinal-designate Tobin was ordained a Redemptorist priest June 1, 1978. He was superior general from 1997 to 2009. The closeness between him and his order continues.

“I extend the heartfelt congratulations of the entire Denver province to Archbishop Tobin,” said Father Stephen Rehrauer, provincial superior of the province. “His selection to the College of Cardinals affirms Archbishop Tobin’s extensive service to the church.”

The pope’s choice of Cardinal-designate Tobin also excited the family he has created in the archdiocese in his nearly four years as spiritual leader of the church in central and southern Indiana.

A group of high school students from southeastern Indiana delayed a visit to the Bishop Simon Brute Seminary in Indianapolis Oct. 10 to attend a news conference for the new cardinal-designate in the Archbishop Edward T. O’Meara Catholic Center in Indianapolis.

The group was led by Father Jonathan Meyer, pastor of All Saints Parish in Dearborn County.

“I’m feeling blessed and thankful,” Father Meyer said. “He’s our pastor. He’s our shepherd. Our archbishop will have the opportunity to share his experiences of our local church in the heart of the world. I find that to be a blessing.”

The news created incredible excitement — and some initial concern — for Cardinal-designate Tobin’s close friend and colleague, Annette “Mickey” Lentz, chancellor of the archdiocese.

“I was so happy and proud of him, and at the same time thinking, ‘Please don’t take him from us,'” Lentz said.

“Knowing Archbishop Tobin the way I do and the privilege I have of working so closely with him, he was a great choice. I think the pope knows that, obviously, and I think he will have a great impact on cities around us in the Midwest, on those who are working for the same causes that Pope Francis is working for. He’s already been a good shepherd. I think this just affords people the opportunity to see that he really and truly is out there with the sheep and wants to be a part of them.”

After initially hearing the news, Msgr. William F. Stumpf, vicar general of the archdiocese, also wondered if Cardinal-designate Tobin was being assigned somewhere else. When he learned that the archbishop was staying with the archdiocese, he considered both pieces of news to be terrific.

“I think it’s absolutely awesome,” he told The Criterion. “I can understand why, because he is such an extraordinary leader, and he has such a phenomenal heart, and he’s so humble. He has so much care for the poor and the marginalized. He’s just a perfect fit in terms of the efforts Pope Francis is looking for in the church.”

“We’re really excited for him — all the young adults love him,” Sahm said. “We can’t wait to see what happens next.”

Contributing to this story were Sean Gallagher, Natalie Hoefer, Mike Krokos and John Shaughnessy on the staff of The Criterion, newspaper of the Archdiocese of Indianapolis.

NEXT: Hip-hop artist says youths must work as hard at faith as other pursuits