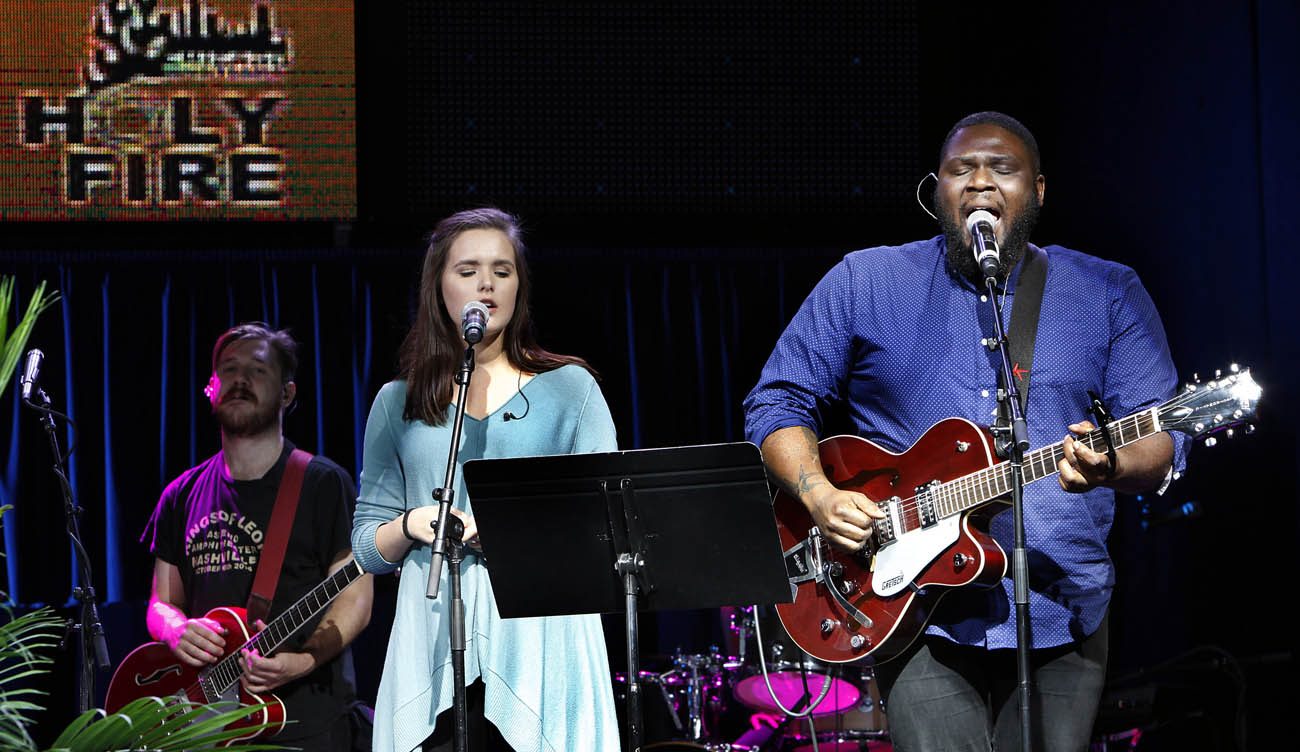 CHICAGO (CNS) — A Catholic hip-hop artist told a crowd of youths gathered for Holy Fire in Chicago that they need to work as hard at their faith life as they do at sports or other pursuits.

Wearing a jersey with “believer” written across the back, Joe Melendrez said when he was little, he wanted Air Jordan shoes because he wanted to “be like Mike.”

“Nobody ever told me I was too young to be like Michael Jordan,” he told the cheering sixth-graders through ninth-graders. “They said, ‘Go for it.’ It’s the same with your faith. Chicago, it’s time to stop saying, ‘I’m too young to have faith.’ Don’t let anybody tell you you’re too young.”

More than 5,000 young people got the chance to dance and laugh and pray and worship, all in the context of deepening their faith, at Holy Fire at the UIC Pavilion arena on the West Side of Chicago.

The first-time event featured faith-based music in genres from pop to hip-hop, complete with pounding bass and room for participants to dance in front of the stage.

Holy Fire took place Oct. 14 and the daylong program was repeated Oct. 15 to accommodate more middle-school students, which were the target audience. Attendance topped 2,500 each day.

Coordinator Rick Moreno, the Chicago Archdiocese’s parish vitality coordinator for the northwest side of Chicago and a number of nearby suburbs, said he was pleased with the turnout.

The event also was sponsored by the National Federation of Catholic Youth Ministries and Declan Weir Productions, which produces the mega festival-like National Catholic Youth Conference, held every two years. (The next one will be in 2017.)

Hosts from Brad Farmer and Gene Monteraselli — who together make up APeX Ministries — used juggling, comedy and the image of saints as spiritual superheroes to draw in participants.

Farmer and Monteraselli were among the early favorites of students from Christ the King School, who attended with Lee Ann Arethas, the parish’s coordinator of religious education.

“No offense to religion teachers,” Runaas said, “but religion class can be kind of boring. This is much better.”

The combination of music and reflection and talks seemed to be doing a good job of engaging the students emotionally, said Chicago Auxiliary Bishop John R. Manz, who heard confessions during the event and celebrated the closing Mass Oct. 14.

“When you’re doing catechesis, you have to touch the whole person,” he told the Catholic New World, Chicago’s archdiocesan newspaper. “You have to reach people emotionally and intellectually. You have to touch people’s minds and their hearts. Too often we just try to give them the intellectual message.”

Dario Salmero, an eighth-grade religious education student at St. Edward Parish, agreed that the day was more engaging than expected.

“I didn’t expect that much music,” he said.

That was the reaction organizers were going for. Rose Koch, youth minister at St. Michael Parish in Orland Park, brought 135 students from the school and the parish’s English- and Spanish-language religious education programs.

“I wanted to give the middle-schoolers an experience like the National Catholic Youth Conference,” Koch said. “This is that quality, although they can’t go as deep.”

NEXT: Tennessee Catholic parish gets energy from nearby national park