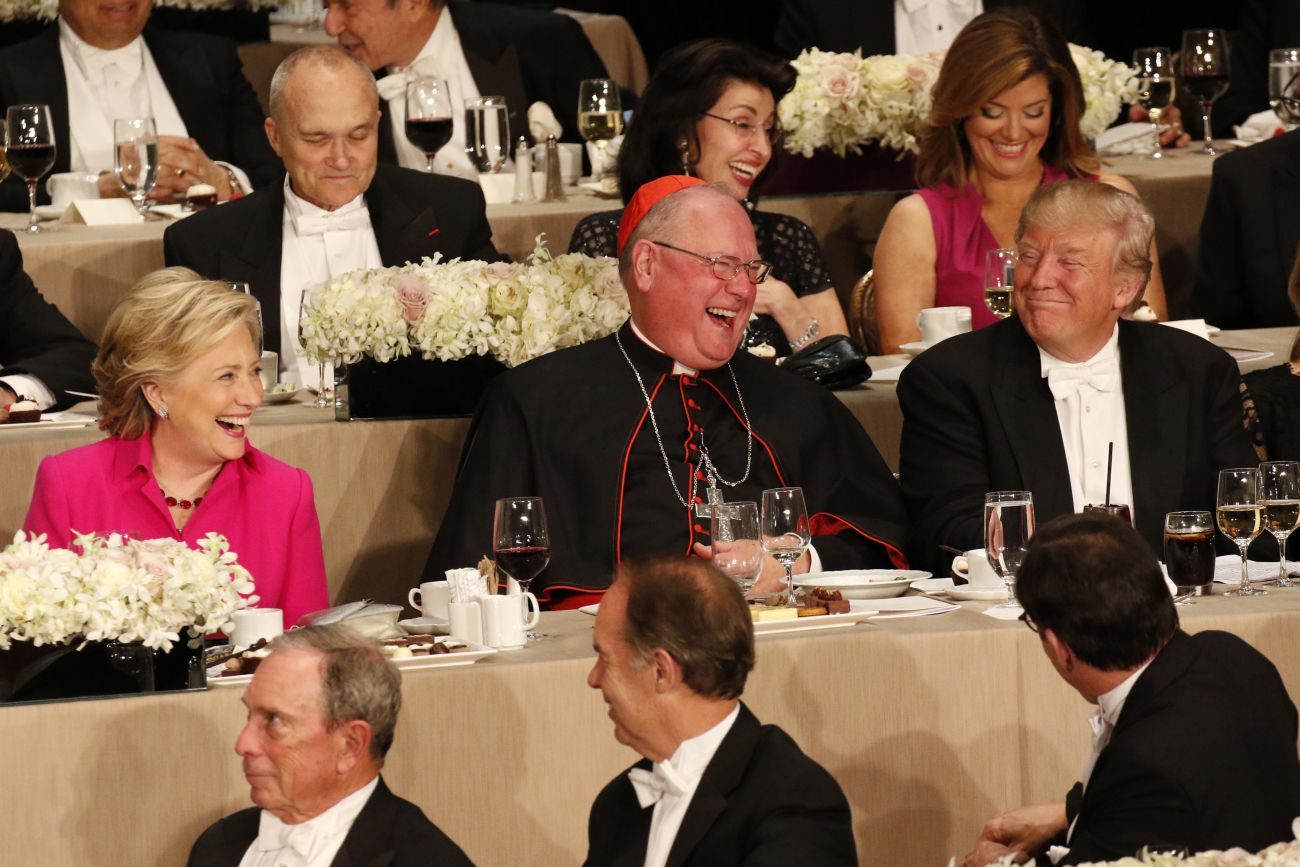 NEW YORK (CNS) — When Donald J. Trump stepped over yet another invisible line of the contentious presidential race Oct. 20, many of the 1,500 people at 71st annual dinner of the Alfred E. Smith Memorial Foundation broke historic precedent to boo him.

Candidates Trump and Hillary Clinton flanked the host, Cardinal Timothy M. Dolan of New York, on the five-tiered dais of the Grand Ballroom at the heavily secured Waldorf Astoria hotel for the charitable gala.

The event has been a traditional opportunity for speakers to poke good-natured fun at themselves, one another, and prominent guests from the worlds of politics, business and philanthropy without inflicting wounds.

In 1928, Alfred E. Smith, former governor of New York who was raised in poverty, was the first Catholic nominated by a major political party to run for president of the United States.

Despite an introductory warning delivered as a humor-coated reminder of the evening’s ground rules by emcee Alfred E. Smith IV, chairman of the dinner, Trump veered from the safety of chuckle-inducing barbs and zings. He said she is “so corrupt” she was kicked off the Watergate commission. The room erupted in a crescendo of boos and shoutouts, as he lobbed one accusation after another that his opponent is deceptive and a Catholic-hater. “She is here tonight … pretending not to hate Catholics,” he said.

Decorum was restored when the Republican nominee recalled past Al Smith dinners as a special occasion to spend time with his father, developer Fred Trump.

Smith, a great-grandson of the foundation’s namesake, aimed jokes equally at both candidates and reflected the general discomfort of the electorate with them. He told Trump to watch his language because “even though the man sitting next to you is in a robe, you’re not in a locker room.” He advised Clinton to remain stoic in the face of insults during the evening by considering it a fourth debate.

Noting the proximity on Fifth Avenue of St. Patrick’s Cathedral to Trump Tower, Smith said Trump’s appearance was historic, marking the first time the Catholic Church was not the largest tax-exempt landowner at the dinner.

Trump was greeted warmly with applause. He quipped that the huge event was a small intimate dinner with friends for him, but that it counted as his opponent’s largest crowd of the season.

Trump gave a shoutout to politicians in the room who formerly loved him, but turned on him when he sought the Republican nomination. He said the dinner gives candidates an opportunity to meet one another’s teams and those working hard to get them elected.

As he spoke, he pointed out chairmen of media corporations seated on the dais and among the assembly. As an example that the media is biased against him, Trump said Michelle Obama gave a speech that everyone loved, but when his wife, Melania, delivered the exact same speech, “people got all over her case. I don’t get it.”

Trump said he knows Clinton is very gracious because, if elected, she wants him to be her ambassador to either Iraq or Afghanistan.

Trump said the presidential debates were the most vicious in the history of politics. In a rare reflective moment, he turned to Clinton and asked, “Are we supposed to be proud of it?”

We need to stand up to anti-Catholic bias, defend religious liberty and create a culture that celebrates life, Trump concluded.

Trump sat down to mixed applause and boos. Retaking the microphone, Smith said, “As Ronald Reagan would say, ‘There you go again!'” He noted the dinner raised a record $6 million.

The Democratic nominee was introduced to a standing ovation. Clinton said the fiery populist Al Smith would be proud of the money raised at the event, but if he saw the “room full of plutocrats” gathered to celebrate his legacy, he’d be confused.

Clinton said she was taking a break from her rigorous nap schedule to attend, but the event was also treat for the guests because she usually charges a lot for a speech. She said she was a little amazed at the opportunity to speak, because she didn’t think her opponent would be OK with a peaceful transition of power.

Clinton said, “Every year this dinner brings together a collection of sensible, committed mainstream Republicans, or as we now like to call them, Hillary supporters.”

She said critics accuse her of saying only what listeners want to hear. “Tonight that is true. This is exactly what you want to hear. This election will be over very, very soon.”

Clinton said when Trump wanted her to undergo a pre-debate drug test, “I was so flattered he thought I used some sort of performance-enhancers. Actually I did. It’s called preparation.”

Trump has questioned her stamina, Clinton said, but over the course of three debates, she has stood next to him for longer than any of his campaign managers. She said Trump is so concerned about her health, he sent a car to bring her to the dinner. “Actually it was a hearse.”

Nonetheless, Clinton said if elected, “I will be the healthiest and youngest woman ever to serve.”

Clinton said one of the things the candidates have in common is the Republican National Committee “isn’t spending a dime to help either one of us.”

Turning serious, Clinton said it’s easy to forget how far the country has come. When Al Smith ran for office, she said there were rumors that he would forbid Bible-reading in schools, annul Protestant marriages and make the Holland Tunnel into a secret passageway to the Vatican so the pope could rule the country. “Those appeals to fear and division can cause us to treat each other as ‘the other.’ Rhetoric like that makes it harder for us to respect each other,” she said.

“We need to get better at finding ways to disagree on matters of policy while agreeing on questions of decency and civility,” she said.

Although the candidates shook hands across Cardinal Dolan at the dinner, he jokingly attributed his nascent cold at the benediction to having spent two hours seated between them, which he said is “the iciest pace on the planet. Where is global warming when you need it?”

He noted the funds raised at the dinner would provide grants for thousands of mothers and children who are most in need and least visible to society.

Dinner guests in formal attire sat elbow-to-elbow at gold-covered tables in the ballroom and its two balconies. The $3,000-a plate meal included a seafood trio appetizer, tournedos of beef and a chocolate dessert duet. Metropolitan Opera soprano Nadine Sierra sang the national anthem from the dais, set against the backdrop of a huge American flag.

PREVIOUS: Can U.S. rejection of private prisons lead to similar move by states?

NEXT: Pope Francis an honored guest of National Park Service during his visit