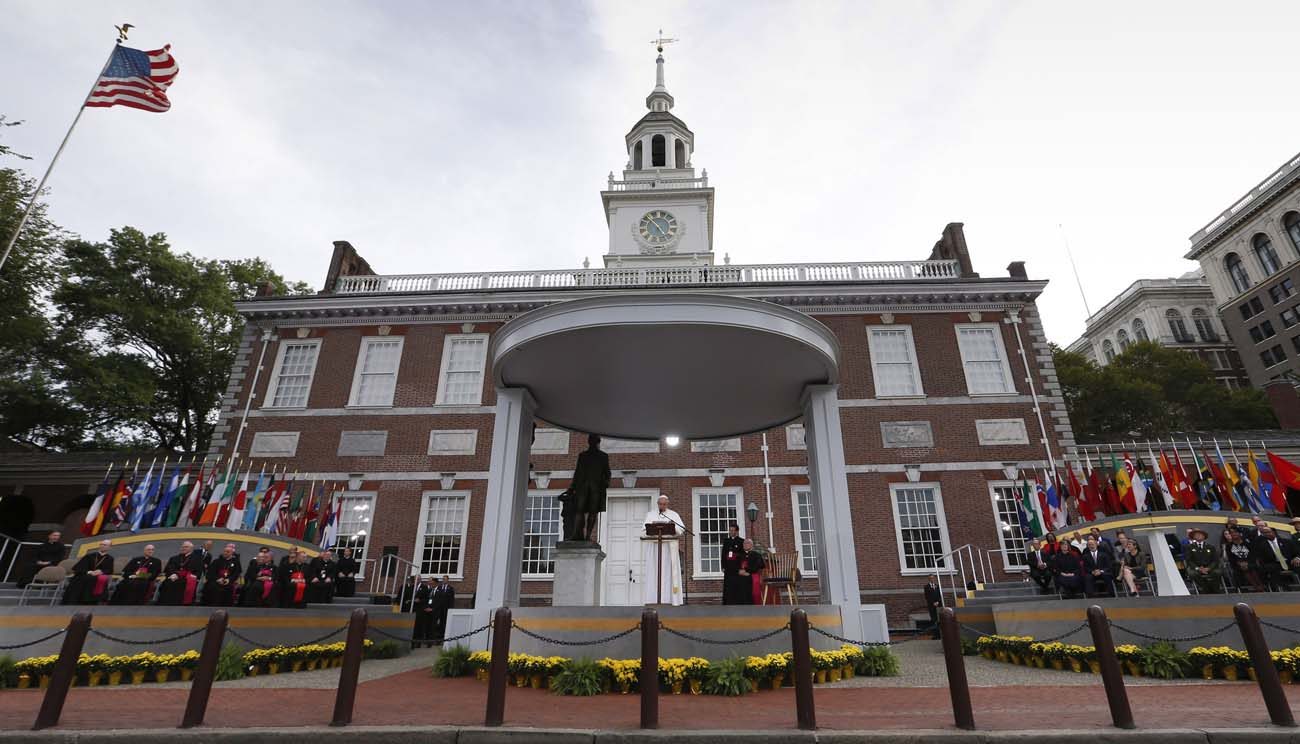 Pope Francis delivers an address Sept. 26, 2015, in Philadelphia from Independence Hall, which is part of the National Park Service system. (CNS photo/Paul Haring)

WASHINGTON (CNS) — As members of the National Park Service observe the organization’s centennial in 2016, they affectionately recall one of their most celebrated guests of honor — Pope Francis.

In addition to awe-inspiring parks such as the Grand Canyon, Yosemite and Glacier, some of the United States’ most iconic sites also are a part of the National Park Service, including the White House and Independence Hall, both of which were on the pope’s itinerary during his 2015 U.S. apostolic journey.

Pope Francis was the third consecutive pope to visit the White House.

“Many people don’t realize that the White House is a national park,” said Kathy Kupper, a Park Service spokeswoman based in Washington. “So, it’s an image that has become pretty customary when we think of the head of the Catholic Church visiting our country.”

However, it was the pope’s visit to Independence Hall in Philadelphia that became a symbolic centerpiece of U.S. trip.

Pope Francis wanted to visit the building because it played such a key role in the founding of the United States and its storied democratic experiment.

It’s also the site where he delivered one of his most memorable speeches on religious freedom and welcoming the stranger.

Franklin Vaca, a native of Ecuador living in Minnesota who traveled cross-country to see Pope Francis in Philadelphia, told Catholic News Service that seeing the Holy Father speaking in front of the iconic symbol of American freedom touched him at his core.

“He’s calling us to live the Gospel,” Vaca said of the pope and then became emotional. “He’s showing the face of people. How immigration is effecting people. Even though we were not born here, we can have an impact here.”

Pope Francis told the crowd — many of whom were immigrants living in the U.S. — on that September day that he was praying for responsible immigration reforms to prevail in the U.S. government, driving home the point that it’s a “nation of immigrants.”

“Do not be discouraged by whatever challenges and hardships you face,” Pope Francis said during his address. “Like those who came here before you, you bring many gifts to this nation.”

The optics couldn’t have been better for the leader of the Catholic Church to speak about personal freedoms and religious liberty in front of the building where the Declaration of Independence was signed in 1776, creating a nation built on those principals, said John Jarvis, director of the Park Service.

Independence Hall was built in 1732 and originally housed all three branches of Pennsylvania’s colonial government.

It later served as a meeting place for the Second Continental Congress and is the spot where both the Declaration of Independence and the U.S. Constitution were debated and signed.

“Independence Hall is the birthplace of our freedoms and it’s a symbol to all of us of all of the rights that Americans have,” Kupper told CNS during an August interview. “It was a priority for Pope Francis to go there and we were so happy to host him there.”

Before addressing the audience, Pope Francis went inside the building to see where the American founding fathers constructed their plans for what would become the United States, she said.

As a Catholic, Kupper said she was thrilled to meet the Holy Father in that setting.

What pleased her most, however, was the enthusiastic response from her non-Catholic colleagues during their time with the pope.

“He transcends Catholicism,” she said.

NEXT: Knights of Columbus urges U.S. Catholics to pray novena ahead of election