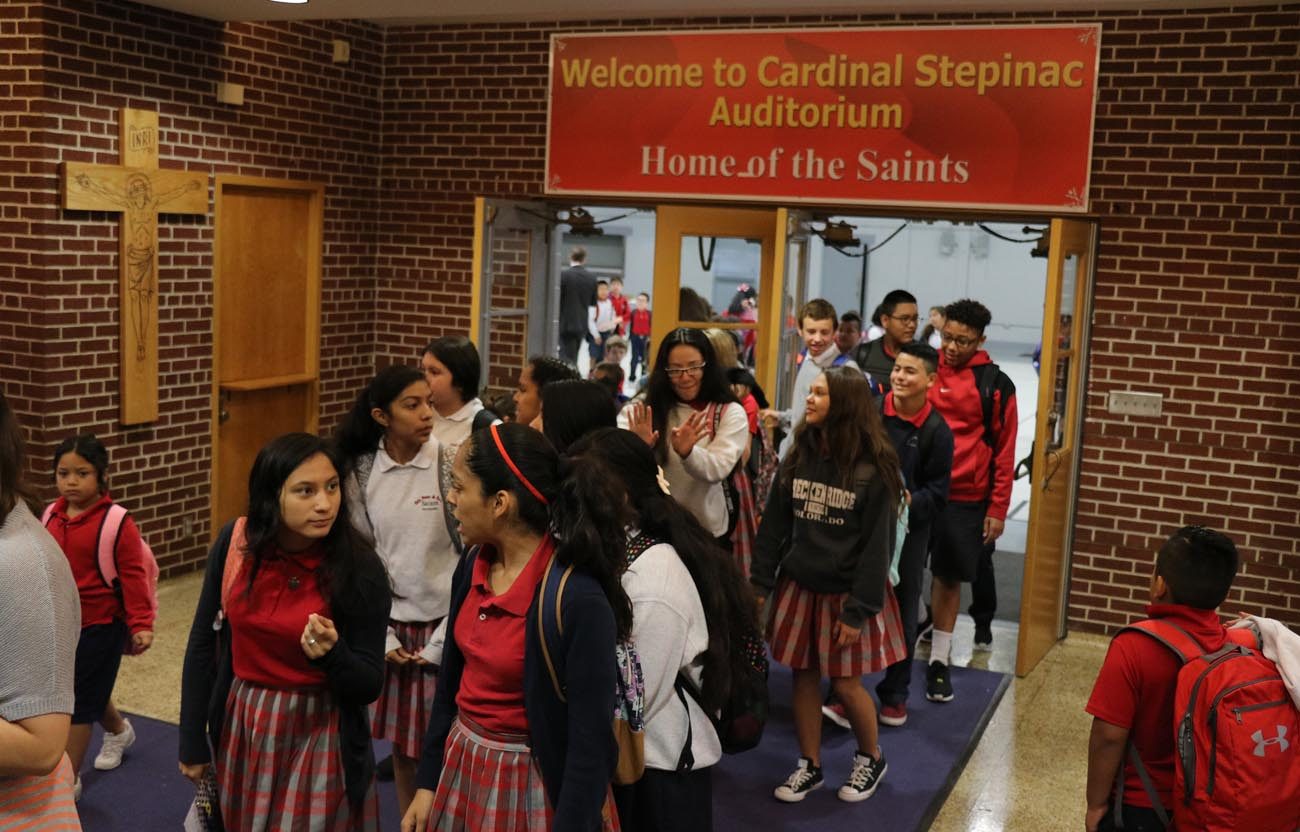 Students head to class Oct. 4 after all-school morning prayers in the gym at Ss. Peter and Paul School in Omaha, Neb., which is among schools in the Omaha Archdiocese with increased enrollment. Principal Cory Sepich says this year's net increase of 36 students is a testament to hardworking staff and supportive parents. (CNS photo/Mike May, Catholic Voice)

OMAHA, Neb. (CNS) — Not just once, but now two years in a row, enrollment in Catholic schools across the Archdiocese of Omaha has grown by hundreds of students.

“It’s a beautiful synergy of many strategies,” Slattery said of likely reasons for the gains.

Those strategies include an archdiocesan marketing effort entering its third year — fueled by the successful “Ignite the Faith” capital campaign — that includes television and radio commercials, billboards and a lovemyschool.com website that has links to individual schools and touts the faith, discipline, strong academics and other positive attributes of Catholic schools, Slattery told the Catholic Voice, Omaha’s archdiocesan newspaper.

The archdiocese offers what it calls Welcome Tuition Grants of $1,000 the first year and $500 the second year for public, private or home-schooled students transferring into archdiocesan schools. Those grants drew 179 new students this year to the 21 schools using them, and archdiocesan funding for new preschools and other programs have helped, Slattery said.

In addition, ambassador training is helping parents be advocates for schools and there are strong efforts to attract a growing Latino population, he said.

“Faith-based is a high component,” Slattery said of reasons more parents are choosing Catholic schools for their children. “Families also tell us it is safety, it’s discipline, it’s respect and it’s high expectations.”

Efforts at the local level, with many schools using logos, hand-out sheets and other materials included with the archdiocese’s “Catholic School. Awaken Greatness” marketing campaign, as well as their own innovations, also are helping attract more families, Slattery said.

“There is an awareness that we need to grow,” Slattery said. “We need to make this a priority.”

Enrollment in Catholic schools nationwide has declined about 60 percent since 1965, a trend briefly interrupted in the archdiocese in the late 1980s and from 1992 to 1998.

With its most recent efforts, the archdiocese is bucking that trend again, with 61 percent of schools reporting enrollment gains this year, Slattery said. Based on September 2015 numbers compared with this September, elementary schools in the Omaha area led the way, up 215 students, followed by rural elementary schools, up 50 students. High schools held their own — up three students in the rural area, down one student in the Omaha area.

The net increases reflect more students — perhaps close to 1,000 — entering Catholic schools, balanced by students leaving for any number of reasons, such as graduating or their families moving away, Slattery said.

Rural schools also saw increases, including Holy Family School in Lindsay, which had a net gain of 23 students. Its long-standing preschool program has helped build a solid foundation for the school’s enrollment.

As more families move into Albion, St. Michael School there is using its own tuition grant program — with funds from a private donor; the school was up 11 students. All students new to the school are given a $500 tuition grant, and families already in the school can apply for similar help based on need, said Lisa Schumacher, principal.

In Elgin, St. Boniface Elementary School, which was up 10 students, is benefiting from parent ambassadors sharing their stories with others, said Betty Getzfred, principal.

Print and other advertising helps in Elgin, but parents telling others about Catholic schools is essential, she said.”I think that is the selling point of the school.”

Highlights in the Omaha area include a net gain of 135 students in the five elementary schools that make up the Omaha Catholic School Consortium, Slattery said.

At one of those schools, St. Bernadette in Bellevue, Principal Lynn Schultz said parents’ positive reviews helped her school enjoy a net gain of 38 students. A growing Latino population and several families choosing the school as they took recent assignments to nearby Offutt Air Force Base also helped, she said.

“I believe that No. 1, our families are happy and pleased with the education and environment here at St. Bernadette,” she said.

Other schools in the metropolitan area that saw significant gains include Holy Name, up a net 36 students, and St. Pius/St. Leo, up 23 students.

“I like to think one of the major reasons is we are a Catholic school, a Christian school,” said Holy Name Principal Don Ridder. “I think parents are looking for that for their child.”

Teachers and other staff at the school are working hard and parents are spreading the word about strong academics and high expectations, Ridder said. “More parents are talking to more parents, their friends and relatives. They see the difference in our school.”

Joyce Gubbels, principal of St. Pius/St Leo, which serves St. Pius X and St. Leo parishes, said Welcome Tuition Grants drew 24 students to the school this year, and the kindergarten class is up 11 students compared with last year, helping the school more than offset attrition. The school also is doing more to tell its story to the broader community, she said.

It has updated its website, held Saturday morning open houses, had student council members give tours of the building and students in their school uniforms offer doughnuts and rolls after Sunday Masses, she said.

“We’ve had lots of different activities to bring other families in,” Gubbels said.

NEXT: Critics of Congolese relief project got it wrong, CRS says