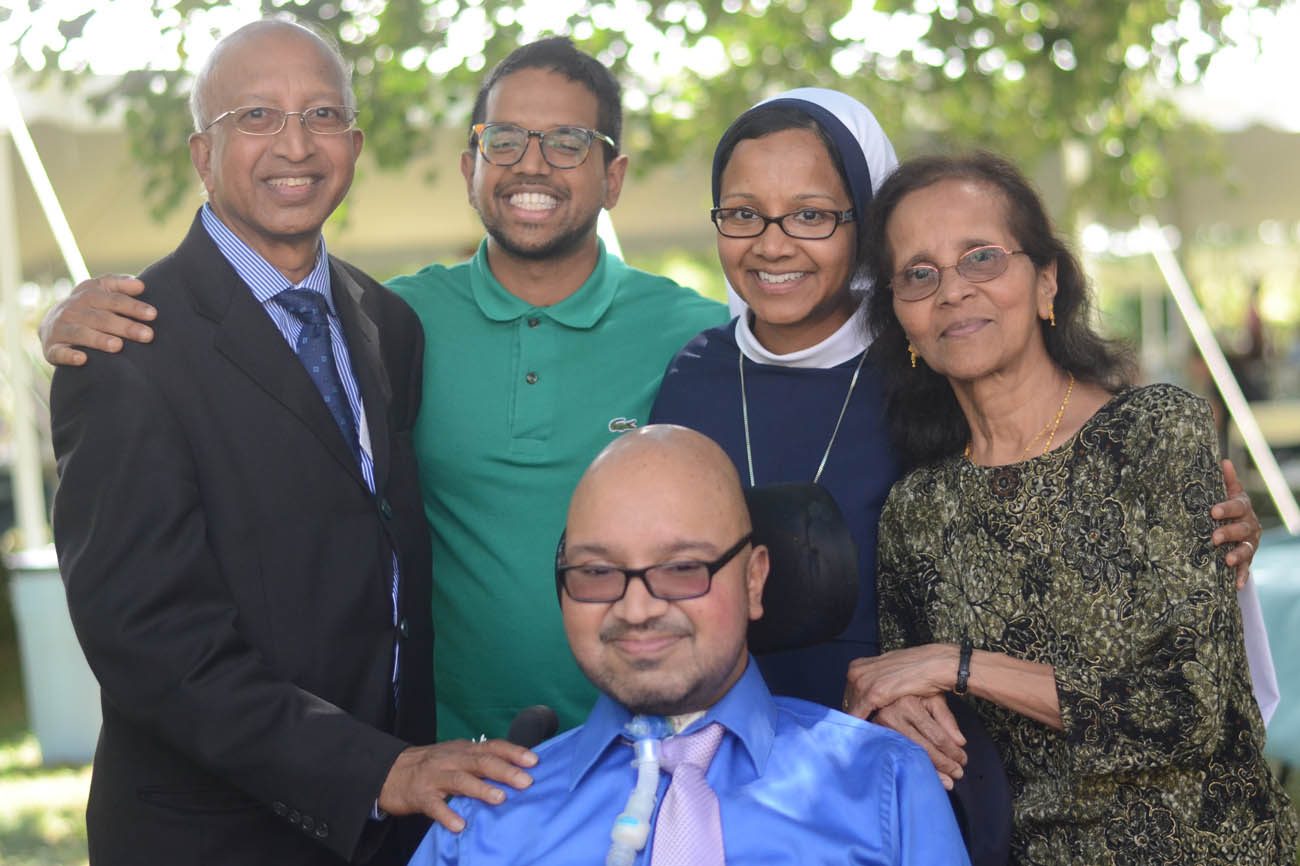 After professing her final vows as a Sister of Life Aug. 6, Sister Grace Dominic is joined by her brother Harold (in front), and at back, by her father, Henry Gomes, cousin Yves Gomes, and her mother, Dominica Gomes, at right. Sister Grace, a native of Washington, professed her vows at the Basilica of St. John the Evangelist in Stamford, Conn. (CNS photo/courtesy Sister of Life)

WASHINGTON (CNS) — Looking back on the moment she knelt before the altar of the Basilica of St. John the Evangelist in Stamford, Connecticut, to profess her perpetual vows as a Sister of Life, Sister Grace Dominic said it didn’t feel like the end of an eight-year path of discernment, through postulancy and novitiate.

Rather, it felt like the start of the next adventure with Christ.

“In a way, it was the culmination of my first ‘yes’ to God, a completion of that ‘yes.’ But I actually feel like it’s just the beginning,” Sister Grace Dominic said. “In my heart, it’s a love story with Jesus that’s new and fresh.”

The seeds of Sister Grace Dominic’s vocation were first planted in the Archdiocese of Washington, where she was born and raised, attended school, graduated from college and began a career in journalism. Here, in her hometown, God’s eventual plan for her life took shape. As she said, it’s where “everything began to unfold.”

Sister Grace Dominic, 36, formerly Henrietta Gomes, was baptized at the Cathedral of St. Matthew in Washington and grew up in St. Camillus Parish in Silver Spring, Maryland.

Her parents, Henry and Dominica, and her older brother, Harold, are longtime St. Camillus’ parishioners and for the past 32 years, her father has been a member of the parish’s multicultural choir. Her parents are natives of Kolkata, India, and immigrated to the United States in the early 1970s.

After Sister Grace Dominic’s graduation from The Catholic University of America, with a bachelor’s degree in communications, she joined the reporting staff of the Catholic Standard, Washington’s archdiocesan newspaper. Her first day on the job was 9/11.

Nearly 15 years later, she recalls writing news stories on the heartache and prayers of those in the Archdiocese of Washington on the day of and in the weeks following the devastating terrorist attacks on the nation. The heroism and loss of 9/11, she said, deeply affected her and helped open her heart to begin considering a vocation to religious life.

From 2001 to 2004, she covered other memorable events for the Catholic Standard, including the 2002 World Youth Day in Toronto, the final one attended by Pope John Paul II.

She said being in the presence of the frail, yet spiritually vibrant, pope drew her to think more about the Lord’s plan for her life. She recalls being awestruck by Pope John Paul’s “strength even though he was physically ailing.”

Sister Grace Dominic said telling the individual stories of the lives of the archdiocesan faithful were her favorite articles to write.

“I was just the little rookie on the staff, but I was eager and ready,” she said in an interview with the Catholic Standard a week after the Aug. 6 Mass where she professed her perpetual vows. “It was fascinating getting to meet people. Each one had their stories and journeys, some carried heavy crosses.”

And although she wasn’t yet seriously thinking of religious life at the time, she said her experience working in the Catholic press helped lay the groundwork for her future vocation. “God uses everything,” she said.

Sister Grace Dominic later attended Franciscan University of Steubenville, Ohio, where she received a master’s degree in theology. When she returned to the Washington area, she worked as a reporter for the Arlington Catholic Herald, newspaper of the Diocese of Arlington in Northern Virginia. In 2008, she entered the Sisters of Life.

“I had been in denial for a while, but the Lord is persistent. I was charmed by his persistence,” she said. “Jesus swept me off my feet.”

During the Mass of profession in Stamford, New York Auxiliary Bishop John J. O’Hara praised the Sisters of Life for their commitment to the legacy of their order’s founder, the late New York Cardinal John J. O’Connor, who was a staunch defender of the dignity of human life at every stage.

The mission of the Sisters of Life, founded in 1991, is to assist vulnerable pregnant women with their spiritual and temporal needs so they will choose life for their unborn babies.

Celebrating the Mass on the feast of the Transfiguration, Bishop O’Hara drew parallels between the three apostles who accompanied Jesus up Mount Tabor where his glory was revealed to them, and the Sisters of Life on the day of their perpetual profession.

“As you go down into the valley, bring joy where there is sorrow, love where there is hate, light where there is darkness, and life where there is death,” said Bishop O’Hara in his homily to the sisters. Hundreds of family and friends of the Sisters of Life, as well as many members of other religious communities and well-wishers attended the Mass.

The Sisters of Life take the traditional vows of poverty, chastity and obedience, and an additional fourth vow, which is their charism, “To protect and enhance the sacredness of human life.”

Reminiscent of brides on their wedding day, the six newly professed Sisters of Life, wearing long white habits with navy blue scapulars and white veils, walked up the basilica’s main aisle, each one accompanied by her parents in carrying the gifts during the offertory procession.

Sister Grace Dominic’s brother, Harold, who uses a motorized wheelchair because he has muscular dystrophy, described the occasion as joyful as a family wedding. “I don’t feel I’ve lost a sister, not at all. Through my sister, I have gained 90 some sisters. They really became family,” he said.

Erika Rivas, who is from the New York borough of the Bronx, also considers the Sisters of Life, especially Sister Grace Dominic, as her own family. Five years ago, facing a crisis pregnancy, she picked up the phone and called the sisters in New York City. “Something was telling me to make that call and get help. It was God telling me,” she said.

Rivas moved into the Sisters of Life convent and Sister Grace Dominic was by her side in the hospital delivery room when Rivas’ twins, Sophie Grace and Sarah Brigid, were born.

At a luncheon reception following the Mass, Sister Grace Dominic hugged her now 4-year-old goddaughters, as Rivas looked on and smiled. “She is so very special and so humble. She was with me the whole time, even with me when I was in labor. I really love her,” Rivas said. “I was a single mom and didn’t have the strength to go on, but the sisters have the strength and the faith.”

Sister Grace Dominic is currently her order’s vocations director. She said she feels blessed and privileged to help bring the Sisters of Life mission of mirroring Christ’s love in a wounded and weary world.

“Our message to women is to love them, so they see they are loved, truly and infinitely,” she said. “They can then see they have the capacity to love (their babies) in return.”

PREVIOUS: For Carolyn Woo, the next step is ‘refirement,’ not retirement

NEXT: Brothers who are now priests say strong family life key to all vocations