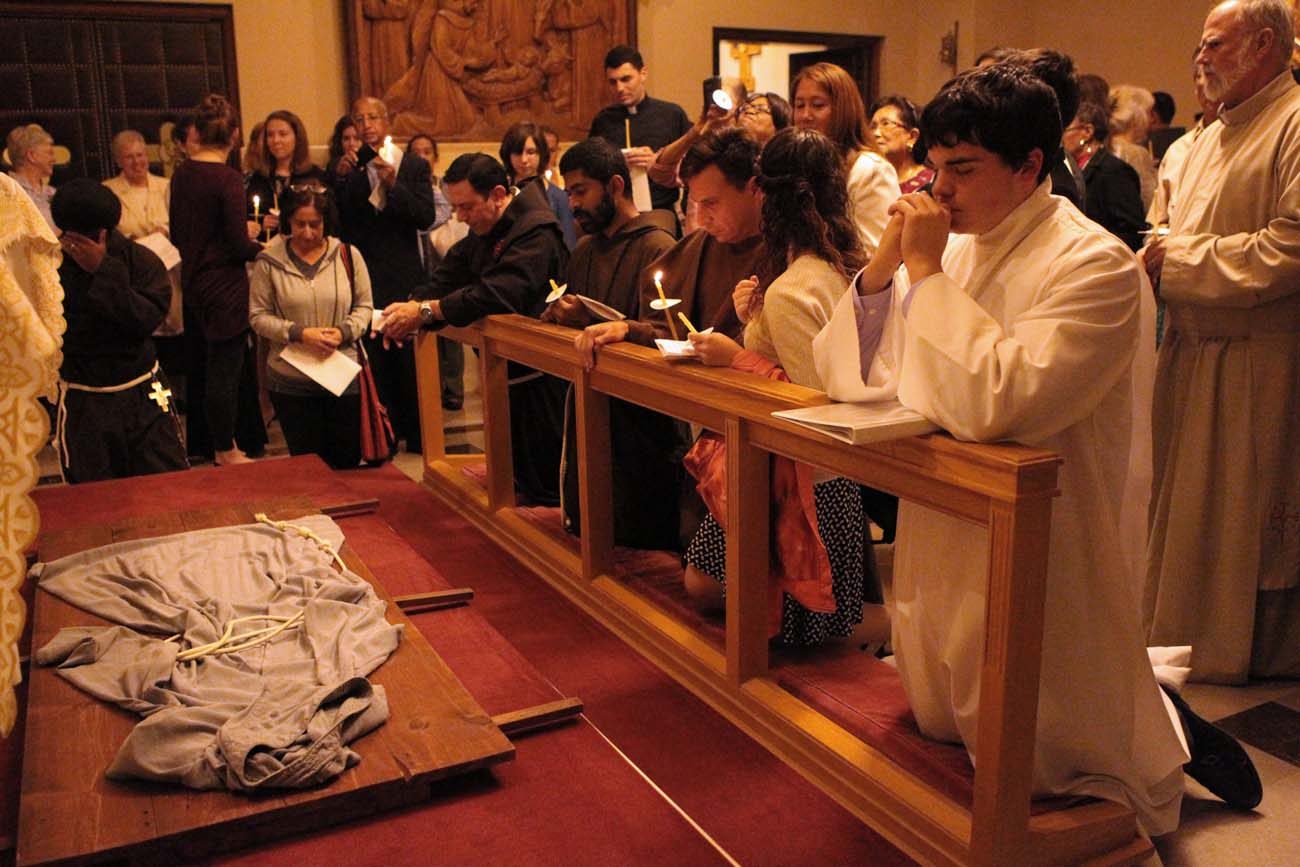 Followers of St. Francis pray over a habit as they gather Oct. 3 at the Franciscan Monastery of the Holy Land in Washington to mark the passing of St. Francis from this world into heaven. Some Franciscans say Pope Francis is helping a revival of Franciscan spirituality in modern times. (CNS photo/Rhina Guidos)

WASHINGTON (CNS) — Each Oct. 3, on the eve of the feast of St. Francis of Assisi, his followers around the world mark his “transitus,” or passing, from this world into eternal life.

Sometimes there’s a re-enactment of the physical death of the popular saint and sometimes a habit is laid out on something that looks like a stretcher called a bier, reminding those present of Francis.

The moment of his death can touch on the somber as much as the Franciscans, popularly known for their joy, can make it. But in Washington this year, St. Francis was very much alive to those gathered at the Franciscan Monastery of the Holy Land as many spoke of a revival of sorts taking place in the Franciscan order and one they owe to the world’s most famous Jesuit of our day.

“We have to acknowledge a renewed Franciscan spirit in our world precisely because of this new Francis who has shaken up the church, shaken up the world and hopefully shaken up all of us,” said Franciscan Father Tom Washburn, referring to Pope Francis during the ritual known as the transitus.

Ottoniel Perez, a Third Order Franciscan from Silver Spring, Maryland, said the pope certainly has given an “impetus” to the Franciscan order because of his “Franciscan touch.”

Pope Francis focuses, Perez said, on the lifestyle that many Franciscans, lay and religious, study and practice: a care for creation, a focus on mercy and the poor, and the importance of community. Those are values that go against the modern secular culture, which emphasizes individualism and the material, he added. But if you look closely, there’s something about the values laid out by the original Francis that are making a comeback, Perez said.

Certainly, something about Francis called out to Michele Dunne of Washington.

“These values of poverty, humility, simplicity … these things resonated,” said Dunne. They were “the perfect antidote in a city like Washington, D.C.,” because it can be a place for those obsessed with power and money, she told Catholic News Service. Dunne is hoping to profess her vows as a Third Order Franciscan sometime this year. Third Order Franciscans, also known as tertiaries, are lay Catholics who make vows, participate in community activities and prayer, as well as good works.

Though she was involved in the life of the church, Dunne said she was looking for a different way to live out her spiritual life and she began reading about lay movements in the Catholic Church, but something about the Franciscan spirituality called to her. Francis, she said, even in the 13th century could see “how laypeople could live these values. I was fascinated by this. I was attracted to a life that combined prayer and service. It’s not one or the other.”

Lay Franciscans, like Perez and Dunne, are involved in activities such as helping Christians in the Holy Land, they may help out in a community garden, tending to crops that will be donated to the poor, they can help cut grass as well as provide other services to religious communities; some serve the hungry and poor in soup kitchens and some will tend to the physical and spiritual needs of marginalized communities.

Perez said that following Francis, for him, took him from being focused on a career as an architect, longing for his name to be known, to one that helped him see that serving others and focusing on others, particularly the poor and marginalized, was more important. Instead of becoming an architect, he went to work for the Catholic Church in ministry, then worked with Latinos in prisons, helping them and their families, and now works with youth.

Focusing on others is “a challenge all the time,” Perez said, but studying about the Franciscans, “it woke something inside me … my life had meaning.”

Father Jim Gardiner, a Franciscan Friar of the Atonement, said some in the general public find comfort and sweetness in the cute and popular notion of St. Francis surrounded by birds or other animals, but if you study his life and think about it, “he was subversive, really, in terms of the values of the world. He wanted to turn the world upside down.” That message is one that is affecting a modern world that finds itself surrounded by a reality and values that may not be as great as they seem, he said.

“Deep down inside, they’re uncomfortable with the superficiality of today, the ramped-up consumerism, the racism, the stratification of society,” Father Gardiner said. The spirituality Francis set out offers freedom from that, he said.

Francis fought for the poor, for peace in a time of war, and he dealt with the Catholic Church scandal, Father Washburn said to those gathered for the transitus ritual in Washington.

The church of 13th century, in which Francis found himself, “was rocked by sin and immorality all around,” said Father Washburn. “And yet today, we don’t remember that time for its scandals. We remember it for the great period of holiness that it gave birth to.”

He reminded those gathered that in 2013, Franciscan Father Michael Perry, the leader of the Franciscan order, said: “It’s clear that Pope Francis has ushered in a new Franciscan moment in the church. We now have a Jesuit pope with a Franciscan heart calling us back to ourselves. If we don’t embrace this Franciscan moment, then we might as well all go home.”

So, this is the time to examine, Father Washburn said, what it means to be Franciscan in the modern age and what Pope Francis, in his embodiment of the Francis, the original, is calling followers, and even admirers, to do.

“Eight hundred years later, this new Francis, our Holy Father Pope Francis, wants to propose it to us again, and if we follow where he wants to lead us, not in word, but in action, we will again change the church and change the world, if we first, again, change our hearts,” Father Washburn said.

NEXT: Faith and politics take the stage in vice presidential debate