Faith and politics take the stage in vice presidential debate 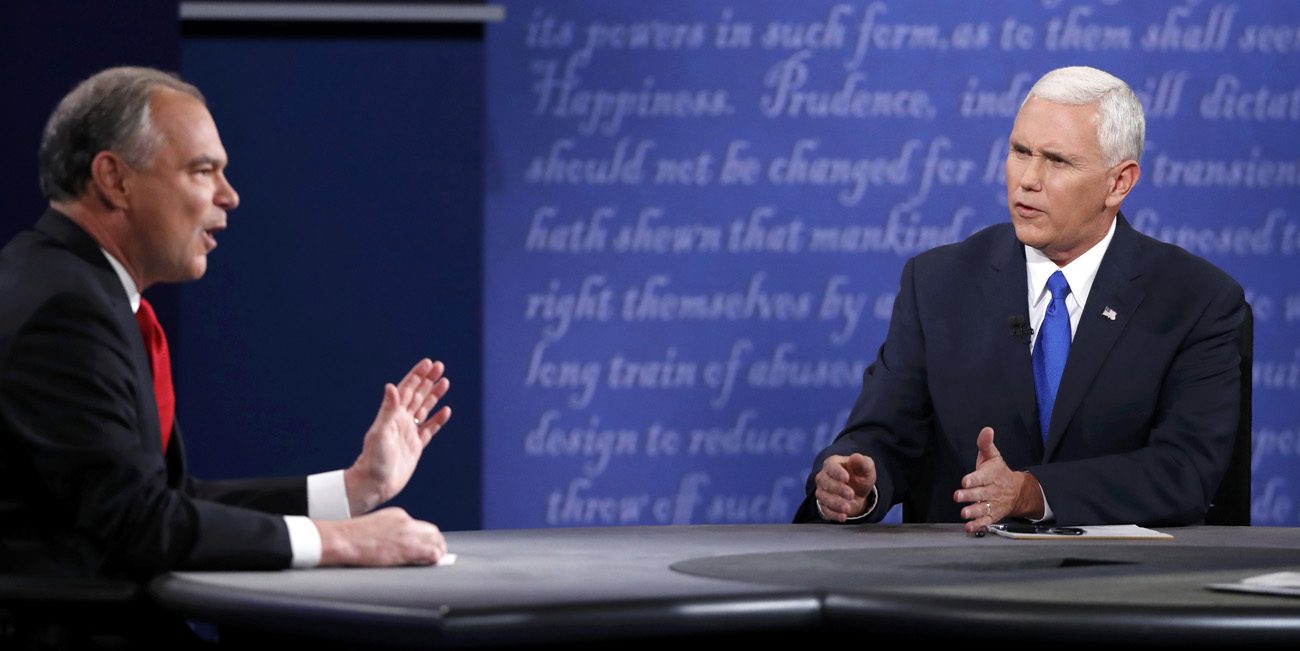 WASHINGTON (CNS) — In opening remarks during the vice presidential candidates’ debate Oct. 4, each candidate alluded to faith but they didn’t return to how their beliefs influenced their political views until the last 10 minutes of the night.

In first few minutes of the debate at Longwood University in Farmville, Virginia, Kaine said when Hillary Clinton asked him to join her ticket, she highlighted, among other things, that he had “been a missionary,” referring to the time he took off from Harvard Law School to work with the Jesuit Volunteer Corps in Honduras.

Pence began his remarks by speaking of his experience which he said he “would pray” it helps him if he were to become the nation’s vice president.

Over the next nearly hour and a half, the candidates — in between interrupting each other — talked about the economy, jobs, gun violence, police, foreign policy and national security.

At one point, the debate turned to Pence’s decision last year to block Syrian refugees from settling in Indiana, an action which collided with Catholic Charities Indianapolis, which was already in the process of resettling a Syrian refugee family in the state. Indianapolis Archbishop Joseph W. Tobin met with Pence in early December of last year to discuss the family’s plight with him and to reassure Pence that they had gone through an extensive background check.

“If you’re going to be critical of me on that, that’s fair game,” Pence said, noting that he and presidential Republican candidate Donald Trump planned to “put the safety and security of the American people first.”

In the second-to-last question of the evening, moderator Elaine Quijano, a CBSN anchor, asked the candidates, whom she described as being open about the role faith has played in their lives, to talk about a time when they struggled to balance personal faith and a public policy position.

Kaine said the question was an easy one and spoke of his Irish Catholic parents and his Catholic high school, Jesuit-run Rockhurst High School in Kansas City, Missouri, before tackling where he felt challenged by his faith.

“For me, the hardest struggle in my faith life was the Catholic Church is against the death penalty and so am I. But I was governor of a state, and the state law said that there was a death penalty for crimes if the jury determined them to be heinous. And so I had to grapple with that,” he said.

He added that when he was running for governor he was attacked pretty strongly for his death penalty position. “I looked the voters of Virginia in the eye and said, look, this is my religion. I’m not going to change my religious practice to get one vote, but I know how to take an oath and uphold the law. And if you elect me, I will uphold the law. ”

He said it was “very, very difficult to allow executions to go forward” but he upheld the law.

“I think it is really, really important that those of us who have deep faith lives don’t feel that we could just substitute our own views for everybody else in society, regardless of their views,” said Kaine.

Pence said he was also “raised in a wonderful family of faith” with an emphasis on “church on Sunday morning and grace before dinner” and proceeded to focus on the importance of his Christian faith without specifying if he experienced any struggle balancing his faith with politics.

“My faith informs my life,” he said, adding that he tries to “spend a little time on my knees every day. But it all for me begins with cherishing the dignity, the worth, the value of every human life,” stressing his stance against abortion.

Pence noted that Kaine holds “pro-life views personally” but is on a ticket that “wants to repeal the long-standing provision in the law where we said we wouldn’t use taxpayer dollars to fund abortion,” referring to the Hyde Amendment, which bars the use of federal funds for virtually all Medicaid abortions.

In response, Kaine noted that both he and Clinton feel “you should live fully and with enthusiasm the commands of your faith. But it is not the role of the public servant to mandate that for everybody else.”

He added that “the last thing the that government should do is have laws that would punish women who make reproductive choices.”

Kaine also has previously stated that as a Catholic, he supports same-sex marriage; Catholic teaching upholds traditional marriage between one man and one woman.

Bishop Francis X. DiLorenzo of Richmond, Virginia, Kaine’s home diocese, issued a statement this summer about Catholics in public office that reiterated the church’s pro-life stance but did not mention Kaine by name.

“We always pray for our Catholic leaders that they make the right choice, act in the best judgment and in good conscience knowing the values and teachings of the Catholic Church,” the statement read.