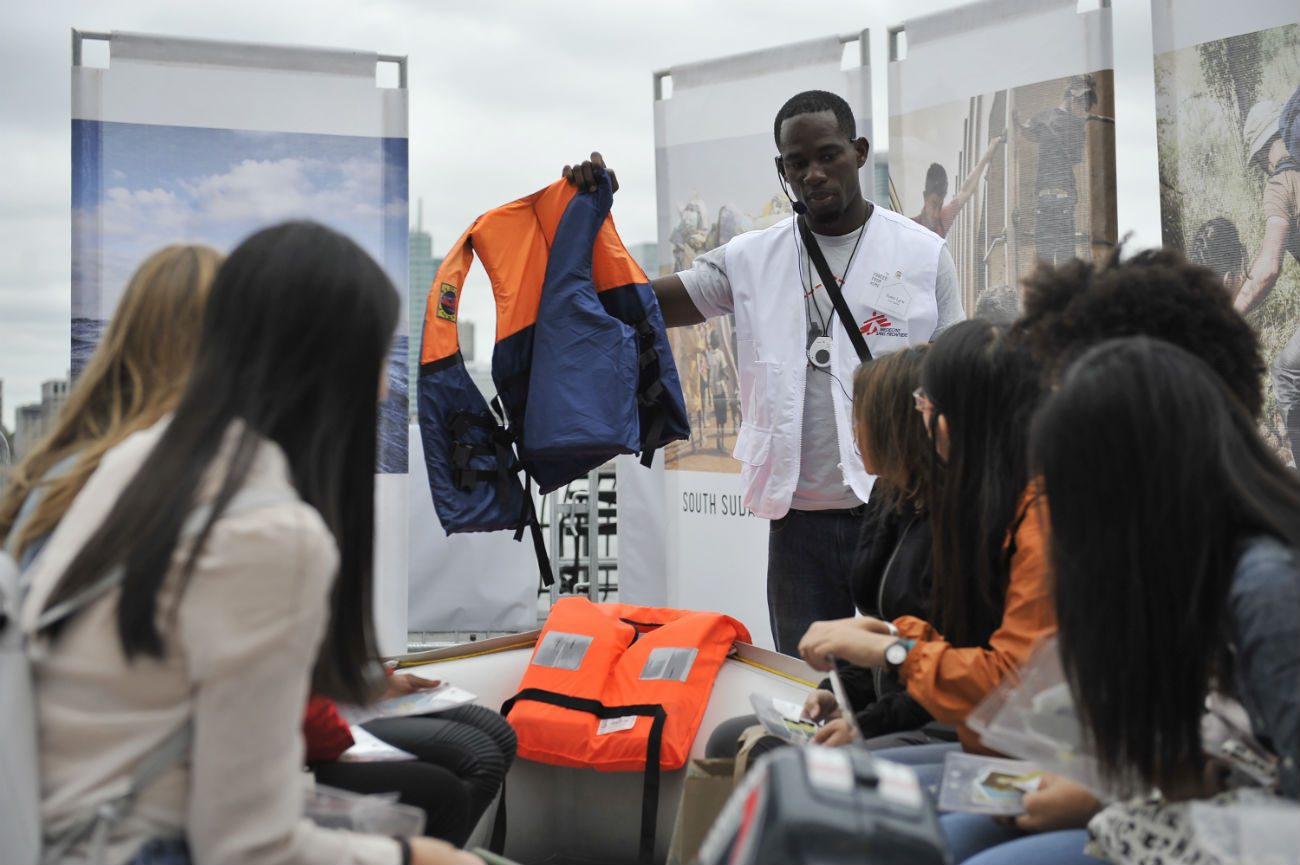 A volunteer at the "Forced from Home" exhibit in Battery Park City, N.Y., holds up a life jacket Sept. 24 that doesn't work, pointing out that these are often sold to refugees fleeing their homeland by raft. (CNS photo/Elias Williams)

WASHINGTON (CNS) — The refugee crisis often seems worlds away and its numbers — more than 60 million refugees and internally displaced people worldwide — are so staggering that it is hard to fully take in the sheer magnitude of the situation and its impact on the individuals forced to flee their homes each day.

A traveling interactive exhibit called “Forced from Home,” sponsored by Doctors Without Borders, intends to change that.

The exhibit, which started in New York Sept. 16 and ends in Philadelphia Nov. 13 — with stops in between in Washington, Boston and Pittsburgh — aims to bring the refugee crisis closer to home by having participants walk — if not a mile, then at least 10,000 square feet — in a refugee’s shoes.

When it opened in the New York borough of Queens, Jason Cone, executive director of the medical humanitarian aid organization Doctors Without Borders, said he hoped the exhibit would make people understand “why so many risk it all and decide that the open sea is safer than the land.”

“We want visitors to have a glimpse of the impossible choices millions of people face every day as they run from horrific war, persecution and economic deprivation,” he said. “In short, we want to close the distance.”

That’s why the exhibit can’t be taken in with a quick glance; instead visitors are led through it in about an hour in groups of 20 by Doctors Without Borders volunteers.

The first stop is a video dome showing footage of the refugee camps in Tanzania, Mexico, South Sudan, Iraq and Lebanon.

After the overview, visitors — who were given identification cards assigning them a country of origin and a status of refugee, internally displaced person or asylum seeker — are given 30 seconds to pick five plastic cards from a wall symbolizing items they would take with them if they were forced to leave home: water, money, photos, clothes, pets, toys, medicines, a cellphone, car keys or blankets.

At first, the choices seem relatively simple, but this reporter — who visited the exhibit Oct. 7 in Washington at the foot of the Washington Monument — started second-guessing some of her picks while looking at the choices others made.

One by one, these cards — symbolizing a small connection to one’s home or future hopes — must be turned in at different stations either as payment for services or simply to make room.

The first station is a plastic raft similar to those often shown in news footage of refugees. Visitors squeeze onto the raft’s floor and sides and are offered life jackets — thin ones that don’t work and are often sold by human traffickers — or more efficient, but costlier, ones.

Other stops give an immediate sense of life in a refugee camp complete with a very basic latrine, a water station and a number of plastic tents meant to be shared by families. Children’s toys — a doll made from cloth and plastic bags and a truck made from a tin can — lay on the ground.

Visitors end the exhibit with one card left. The group Catholic News Service joined seemed to mostly hold onto their passports, but the guide noted that depending on what country they were from, these passports might not even help because you might not even get out of your country, or you might have to go to an unfriendly country that wouldn’t recognize your passport.

The last stop is a virtual reality tent where visitors experience — in six-minute videos — even more of what life is like in a refugee camp in Iraq, Tanzania or Mexico. The 360-degree-views give a very real sense of the enormity of the camps and the sheer other worldliness of trying to find normal routines in tent cities where there is little privacy, little to do and continuously long lines just for food and water.

At first, there is a fair amount of talking while people try to figure out how to use the gadgets, but once visitors finish with the videos, the tent is eerily quiet as if everyone needed time to take in what they just witnessed.

“I’d like people to be concerned. As citizens of the world we should not consider refugees a threat to our societies, but neighbors in need,” said exhibit guide Sarah Khenati from Verdun, France, who has worked with Doctors Without Borders in the Central African Republic and Occupied Palestinian Territories.

As she sees it: The exhibit offers “a way to prevent refugees from being forgotten by the world.”

Remembering refugees has been a constant theme for Pope Francis, whose first papal trip in 2013 was to the Italian island of Lampedusa where he called attention to the vast number of refugees who had arrived there from Libya and the hundreds who drowned just off the coast trying to get there.

And this spring, after visiting refugees on the Greek island of Lesbos — a temporary home to thousands who have arrived by boat trying to resettle in Europe — the pope brought 12 Syrian Muslims back with him to Italy.

He said the refugees are “living in trying conditions, in an atmosphere of anxiety and fear, at times even of despair, due to material hardship and uncertainty for the future.”

The pope said governments’ concerns are “understandable and legitimate,” but he said people should “never forget that migrants, rather than simply being a statistic, are first of all persons who have faces, names and individual stories.”

Cardinal-designate Joseph W. Tobin of Indianapolis had the same message in an Oct. 14 talk at the University of Notre Dame, saying: “The best way to contest fear (of refugees) is to put a face on the statistics.”

Last year, the cardinal-designate defended the decision of his archdiocese to resettle a Syrian refugee family through the archdiocese’s Catholic Charities agency, against Indiana Gov. Mike Pence’s ban on resettling Syrian refugees in the state.

“It is crucial to contest this climate of fear,” he said, noting that “it dehumanizes us all and calls us to abandon our values.”

NEXT: Shipment heads to Haiti from Miami; plans begin for next phase of relief