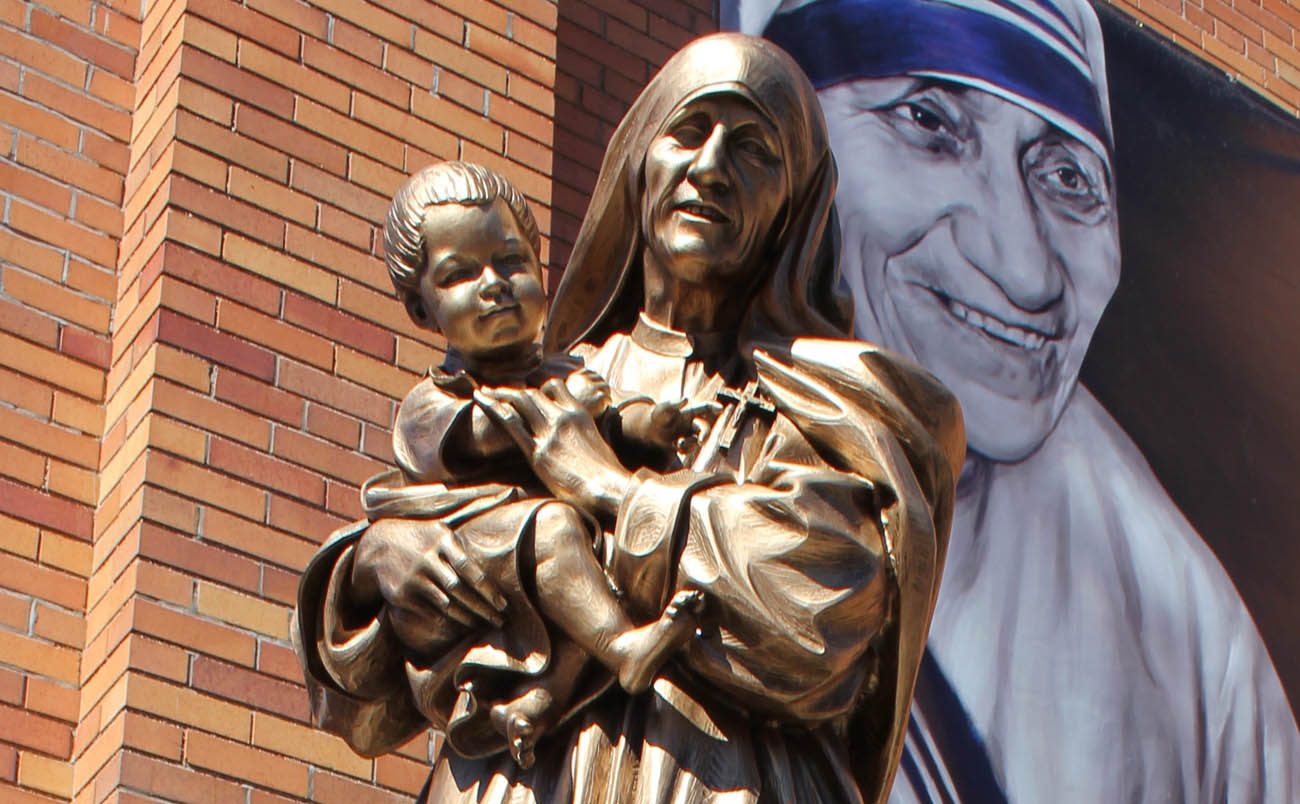 A statue of St. Teresa of Kolkata is seen outside St. Athanasius Church Sept. 25 in the Bensonhurst section of Brooklyn, N.Y., shortly after its unveiling. The statue was a gift to Brooklyn from the Albanian community. (CNS photo/Marie Elena Giossi, The Tablet)

BROOKLYN, N.Y. (CNS) — Pride rushed through the hearts and veins of Albanian-Americans as they watched Albanian President Bujar Nishani unveil a statue of St. Teresa of Kolkata in the Bensonhurst section of Brooklyn Sept. 25.

Hundreds gathered for the ceremony outside St. Athanasius Catholic Church where the figure of the founder of the Missionaries of Charity cradling a child in her arms has been installed. 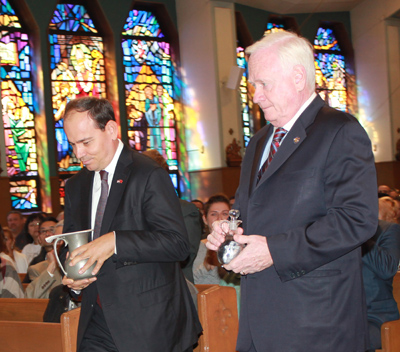 St. Teresa, often recalled as “a humble daughter of Albania,” was born to an ethnic Albanian family in Skopje in was then part of the Ottoman Empire and is now part of Macedonia.

“Today is very special,” Nishani said when he addressed the crowd. “Our dear mother, St. Teresa, is with us.”

Describing her as a woman of “iron will” and “boundless love,” the Albanian president called her “a saint of hope, of compassion, of unshakable trust in God.”

“Mother Teresa is the most precious gift that the Albanian nation has generously bestowed to all mankind,” he said. “I’m convinced that all of you, and everyone else who lives in Brooklyn, will be inspired and take the example of the life and work of the Albanian saint.”

Albanian Roots, a nonprofit dedicated to strengthening the Albanian-American community in the U.S., and its president, Marko Kepi, raised funds for the statue from individuals and groups, including St. Finbar Church in Brooklyn’s Bath Beach neighborhood, and provided labor for the installation.

Behind the statue, a donated banner bears the saint’s image and words: “By blood, I am an Albanian. By citizenship, an Indian. By faith, I am a Catholic nun. As to my calling, I belong to the world. As to my heart, I belong entirely to the heart of Jesus.”

Albanian-born Shpend Koleci broke out in applause with the rest of the crowd as the figure was revealed. Although he is Muslim, he loves his fellow Albanian.

“She was Albanian and she was fighting for human rights,” Koleci told The Tablet, newspaper of the Brooklyn Diocese. “We are all proud to see her here.”

Young girls and boys attended the ceremony in customary Albanian garb, and young Julia Balaj was dressed in the signature white and blue-striped sari of St. Teresa’s religious order. Children sang and danced at a street festival after the formal program.

Albanian-born Arjana Frasheri will see the new statue every weekday as she rides the bus to work. But she still wanted to be among the first to see it when it was unveiled. She and her husband, Genci, stood on the corner near the church for nearly an hour before the event.

“This is important for us,” Genci said. “We respect her because she is from our home.”

Having lived most of their lives under communist rule, the couple says they have no particular religion, but they believe in God and they believe Mother Teresa is a saint.

“She was a small lady who had a big heart,” Arjana said. “She helped a lot of people without money.”

At morning Mass, Msgr. Cassato spoke about the impact St. Teresa’s words and actions have had on countless people around the world, including the monsignor himself.

He recounted meeting the future saint in the Bronx, and the challenge she gave him.

“She looked at me in the eyes with her wrinkly face, handed me a medal of the Miraculous Medal, and said to me: ‘Be a good priest. Take care of God’s poor people,'” he said.

“Indeed, this is what her life was all about. She showed God’s inclusive love to all people.”

And that means everyone, Msgr. Cassato said, admitting that sometimes even he gets conflicted about giving to panhandlers, unsure if the money will go toward buying dinner or drugs. It is then that he remembers what Mother Teresa told him.

He pointed to the day’s Gospel from Luke about the rich man suffering in hell for failing to help his poor neighbor Lazarus in life, and the modern example of Facebook CEO and billionaire Mark Zuckerberg, who is committing $3 billion to eradicate diseases in the world today.

“Today, let us all recommit ourselves to helping the poor. Let us be as Mother Teresa: people dedicated to the poor,” he said.

Giossi is a reporter/photographer at The Tablet, newspaper of the Diocese of Brooklyn.

NEXT: Hurricane Matthew tears through Haiti as aid workers prepare to respond