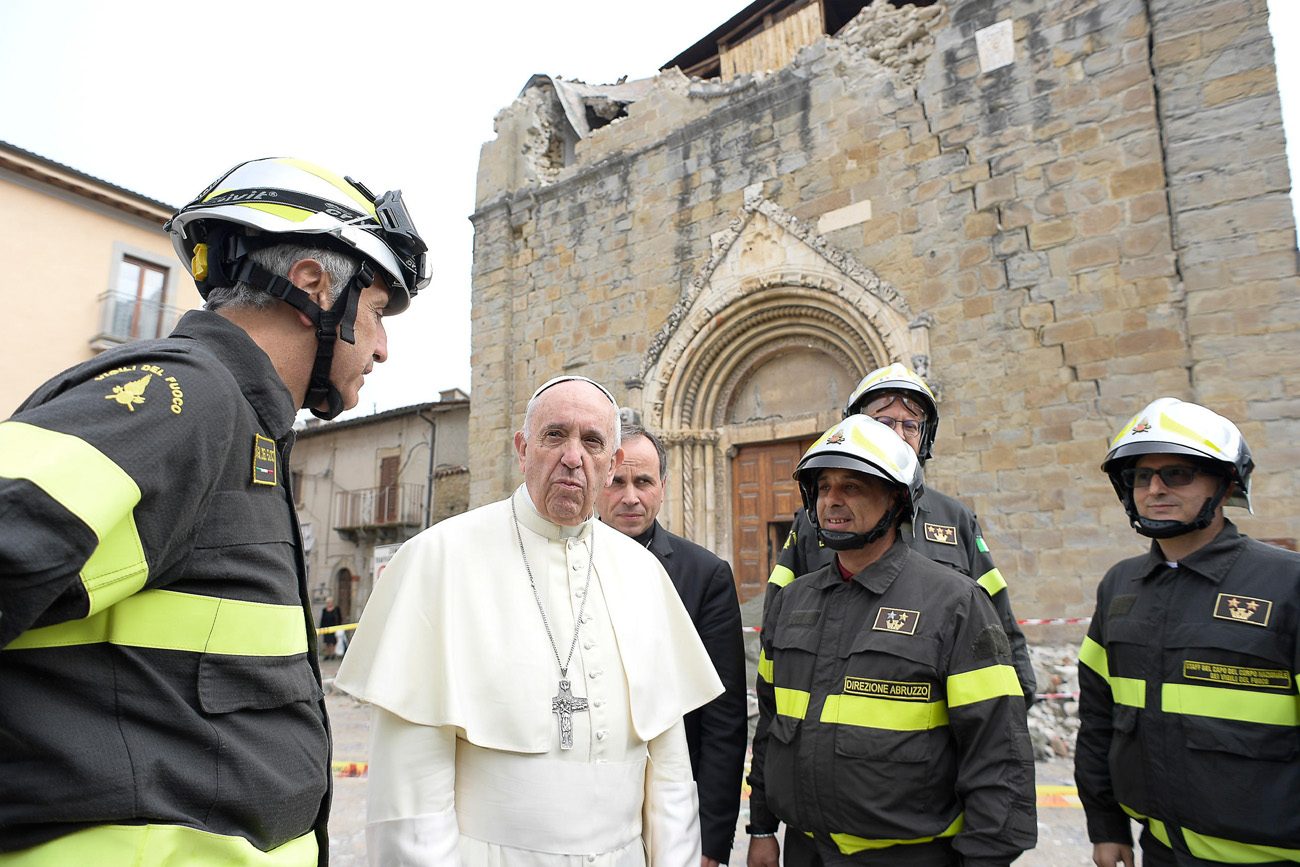 Pope Francis talks with firefighters as he visits the earthquake-ravaged town of Amatrice, Italy, Oct. 4. The town was devastated by an Aug. 24 earthquake that claimed the lives of nearly 300. (CNS photo/L'Osservatore Romano) 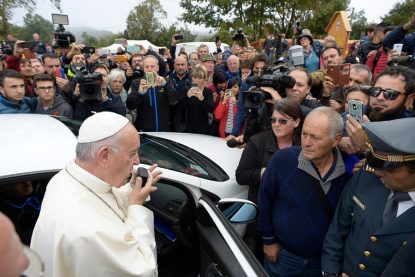 VATICAN CITY (CNS) — Amid the devastation wrought by an earthquake in central Italy, Pope Francis quietly prayed and offered words of consolation to survivors and those assisting in relief efforts.

Later, when crowds pressed around him, the pope used a megaphone to tell the people of Amatrice that he had wanted to visit sooner, but felt showing up immediately after the Aug. 24 quake would have complicated relief efforts and “would have been more of a hindrance than a help.”

“From the first moment, I felt that I needed to come to you! Simply to express my closeness to you, nothing more. And I pray; I pray for you!” the pope said Oct. 4.

The epicenter of the earthquake was close to Norcia, the birthplace of St. Benedict, and had a magnitude of 6.2, according to the U.S. Geological Survey.

Amatrice was the hardest-hit town, accounting for 234 of the estimated 290 deaths, according to the Italian Civil Protection office.

Shortly after news of the quake, the pope had led 11,000 pilgrims in St. Peter’s Square in praying the rosary for the victims. He also sent six Vatican firefighters and six Vatican police officers to Amatrice to help search for victims trapped under the rubble.

During his flight to Rome from Azerbaijan Oct. 2, the pope told journalists that while he was unsure when he would visit the towns devastated by the earthquake, he wanted to do it alone.

“I will do it privately, alone, as a priest, bishop and pope. But alone. That’s how I want to do it and I want to be close to the people,” he said.

Two days later, the pope, accompanied by Bishop Domenico Pompili of Rieti, visited the newly built Capranica Elementary School in Amatrice and greeted the students individually before making his way to the “red zone,” an area completely destroyed by the earthquake and cordoned off due to safety concerns.

Looking over the rubble where the town center once stood, the pope prayed in silence for the victims of the quake.

Pope Francis also visited the St. Raphael Borbona Assisted Living Facility in Rieti where he greeted each of the home’s 60 elderly patients and ate lunch with them.

Before departing Amatrice for the neighboring towns of Accumoli and Arquata del Tronto, the pope told the crowd gathered around him that he had two simple gifts for them.

“Closeness and prayer: this is my offer to you,” he said. “May the Lord bless you all and Our Lady protect you in this moment of sadness, pain and trial.”

After giving them his blessing, Pope Francis led the people in praying a Hail Mary for those who died.

“Always look ahead,” he told the survivors. “Have courage and help each other. One walks better together, alone we go nowhere. Go forward!” 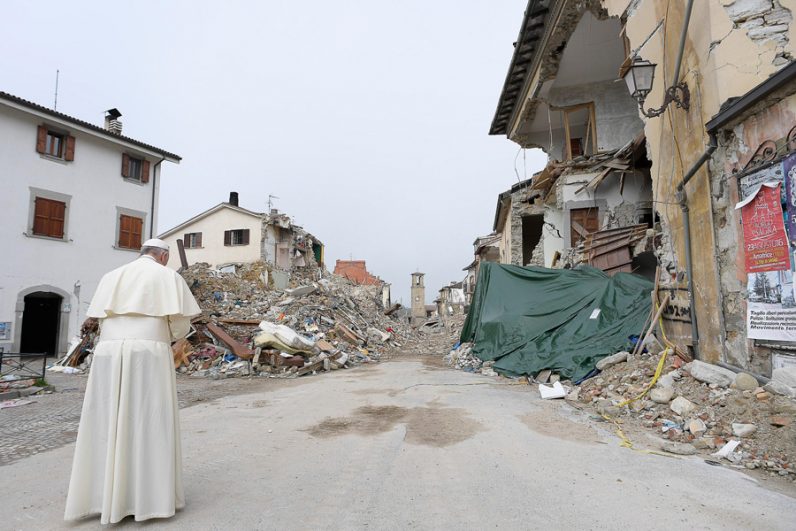 Pope Francis prays as he visits the earthquake-ravaged town of Amatrice, Italy, Oct. 4. The town was devastated by an Aug. 24 earthquake that claimed the lives of nearly 300. (CNS photo/L’Osservatore Romano)

PREVIOUS: Catholics warn against new rules on religion in China

NEXT: Albanian president unveils statue of St. Teresa, a ‘daughter of Albania’