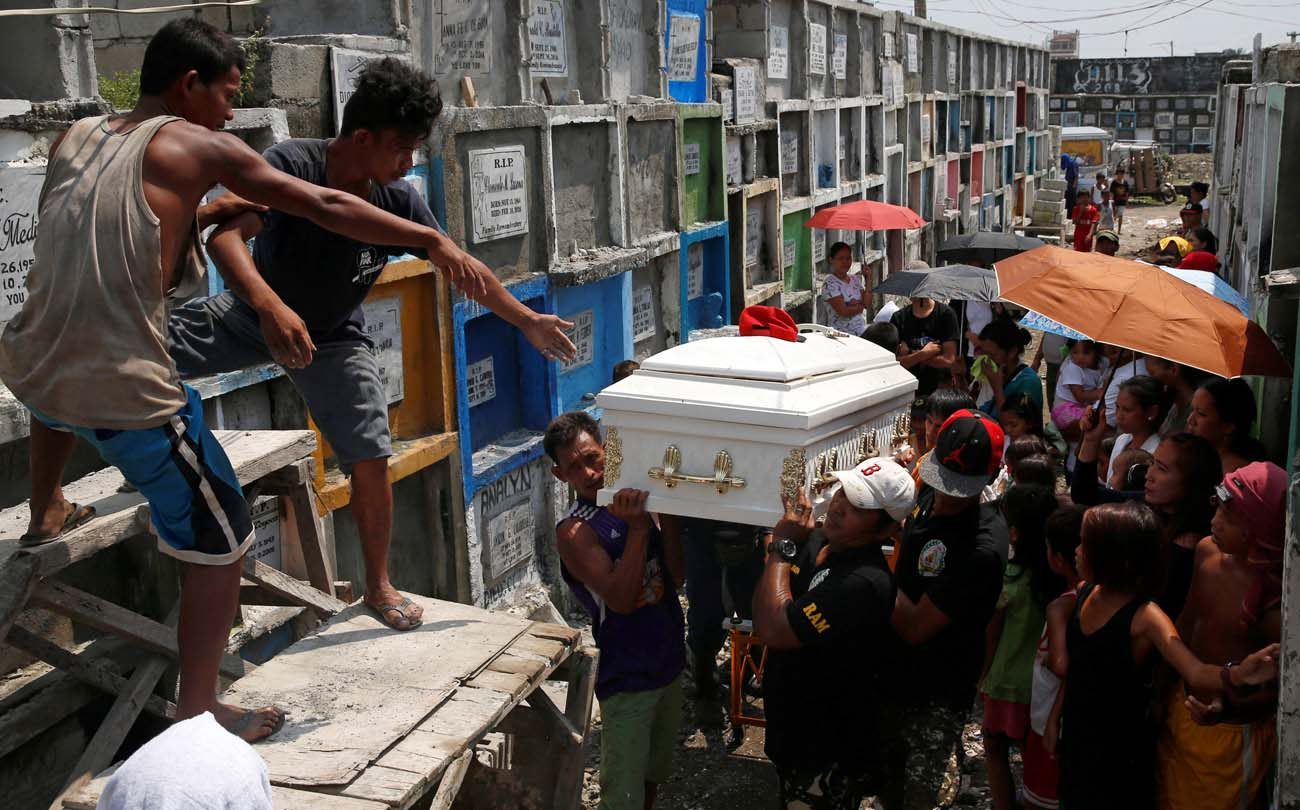 Men carry the coffin of Vicente Batiancila Oct. 23, who police say was among five victims of recent drug-related killings, during his funeral in Manila, Philippines. As Filipinos remembered their departed on All Souls' Day, the country's church leaders called on the faithful to also pray for those who fell victim in the government's all-out war against illegal drugs. (CNS photo/Erik De Castro, Reuters)

MANILA, Philippines (CNS) — As Filipinos remembered their departed on All Souls’ Day, the country’s church leaders called on the faithful to also pray for those who fell victim in the government’s all-out war against illegal drugs.

Father Jerome Secillano, executive secretary of the public affairs office of the Catholic Bishops’ Conference of the Philippines, said that praying for the dead on All Souls’ Day is a “Christian obligation.”

“More so, for those who died in violent circumstances,” the priest added.

Archbishop Angel Lagdameo of Jaro, meanwhile, admitted that the church also “failed to foresee the magnitude of the drug menace.”

“(We) humbly accept our share of shortcomings with regard to forming our consciousness and behavior in confronting social maladies,” he said in a pastoral statement Oct. 30.

Archbishop Lagdameo said that while he affirms the “passion and the vision” of the government against illegal drugs, “we also unequivocally declare that as a church, we cannot accept in conscience extrajudicial killings.”

“The inviolability and sacredness of human life, in all its aspects, must be upheld,” the prelate wrote in his statement titled “Unleashing the Power of Love and Mercy.”

Families affected by drug-related killings will, however, not be able to properly honor the memories of their slain loved ones this All Souls’ Day.

“Many are afraid that they too will become targets, while others do not have enough money to claim bodies from funeral homes,” said Gloria Arellano, chairwoman of Kadamay, a coalition of urban poor organizations.

Most victims of summary executions come from urban poor communities in the Philippine capital. Hundreds of bodies were reported to be unclaimed in funeral homes in metro Manila.

Arellano said the cost of burying the dead is also beyond the reach of most poor families. She said a proper wake and funeral can cost about $1,000.

“Thousands of poor Filipinos will not be able to visit proper tombs of their loved ones this All Souls’ Day,” she said, adding that the killings “are a massive attack on urban poor communities.”

Arellano’s group has been vocal in opposing the government’s “war against drugs.”

She said the government’s drug war was “not only punishing suspects but even their families.”

“In our dream to wipe out drug addiction, are we not becoming a ‘killing fields’ nation?” he said in a statement in August.

Catholic parishes around the country planned to celebrate Masses for victims of summary executions.

The Philippine National Police has reported 2,766 unexplained killings allegedly carried out by vigilantes as of Oct 23.