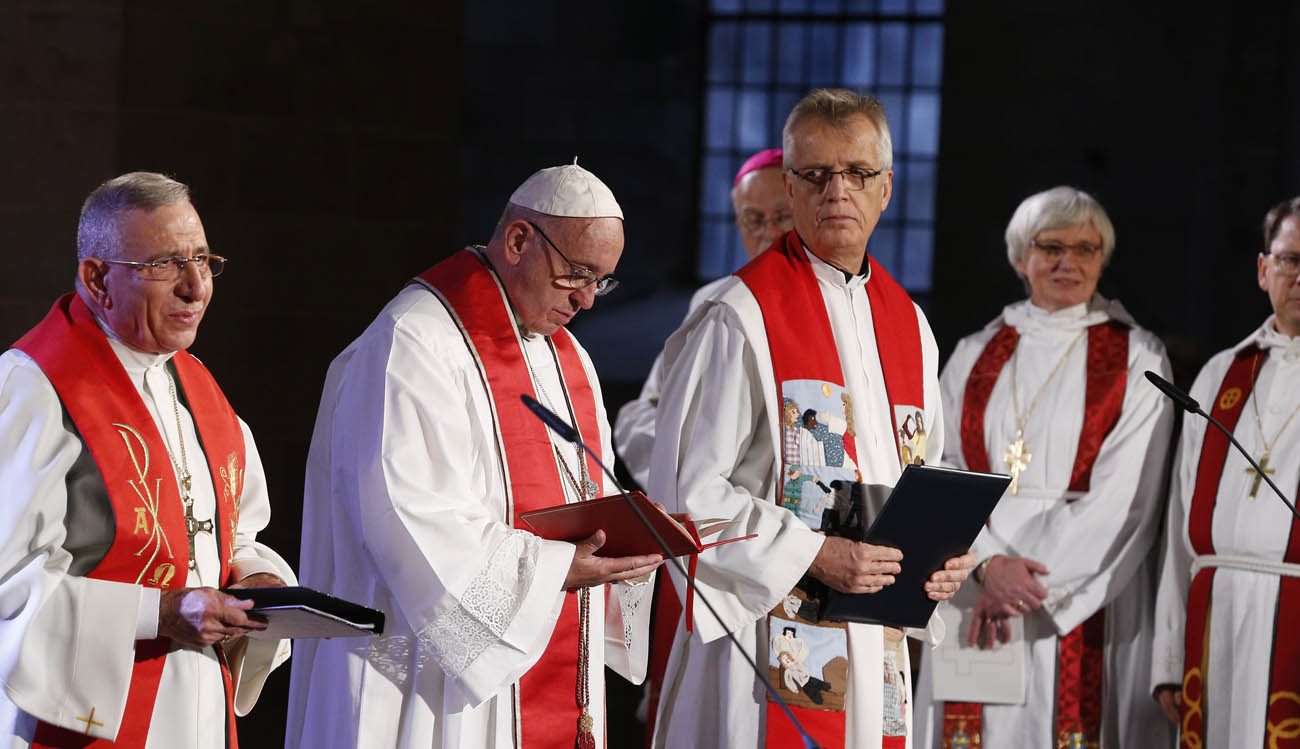 “We Christians will be credible witnesses of mercy to the extent that forgiveness, renewal and reconciliation are daily experienced in our midst,” the pope said Oct. 31 during an ecumenical prayer service in the Lutherans’ Lund cathedral, which was built as a Catholic cathedral in the 11th century.

With the prayer service, Pope Francis and leaders of the Lutheran World Federation launched a year of activities to mark the 500th anniversary in 2017 of Martin Luther’s efforts to reform the church.

For Pope Francis and the Vatican, Catholics are called to commemorate the event by focusing on concrete ways to express and strengthen the doctrinal agreements reached by Catholic and Lutheran theologians over the past 50 years. The most appropriate way to mark the anniversary, they said, was with common prayer and renewed commitments to working together to help the poor and promote justice.

The Lutherans agree, but many also saw the joint commemoration as a moment to recognize that the joint agreements on issues of faith over the past 50 years mean it is appropriate now to expand occasions when eucharistic sharing is possible.

The Catholic Church has insisted that regular sharing of the Eucharist will be possible only when divided Christians have attained full unity.

In his homily at the Lund cathedral, the Rev. Martin Junge, general secretary of the Lutheran World Federation, expressed his hope for shared Communion sooner.

While in the past Catholics and Lutherans sometimes carried stones to throw at each other, he said, that is no longer possible “now that we know who we are in Christ.” The stones cannot be used “to raise walls of separation and exclusion” either, he said.

“Jesus Christ calls us to be ambassadors of reconciliation,” he said, using stones for “building bridges so that we can draw closer to each other, houses where we can meet together and tables — yes, tables — where we can share the bread and the wine, the presence of Jesus Christ who has never left us and who calls us to abide in him so the world may believe.”

A joint statement signed in Lund by Pope Francis and Lutheran Bishop Munib Younan, president of the Lutheran World Federation, said, “Many members of our communities yearn to receive the Eucharist at one table as the concrete expression of full unity.”

Particularly referring to Catholic-Lutheran married couples, the two leaders’ statement said, “We experience the pain of those who share their whole lives, but cannot share God’s redeeming presence at the eucharistic table. We acknowledge our joint pastoral responsibility to respond to the spiritual thirst and hunger of our people to be one in Christ.”

However, they did not authorize further opportunities for shared Communion, but expressed longing “for this wound in the body of Christ to be healed. This is the goal of our ecumenical endeavors, which we wish to advance, also by renewing our commitment to theological dialogue.”

Pope Francis began the service praying that the Holy Spirit would “help us to rejoice in the gifts that have come to the church through the Reformation.” In an interview released Oct 28, he said those gifts were greater appreciation of the Bible as God’s word and an acknowledgement that members of the church are called to a process of ongoing reform.

The service was punctuated with music from around the world, including a Kyrie or “Lord Have Mercy” in Aramaic, the language Jesus spoke. Catholic and Lutheran leaders took turns asking God’s forgiveness for maintaining divisions, “bearing false witness” against each other and allowing political and economic interests to exacerbate the wounds in the body of Christ.

Lutheran Archbishop Antje Jackelen of Uppsala, the first woman to serve as primate of Sweden, read the Gospel at the service.

In his homily, Pope Francis insisted that Catholics and Lutherans must “look with love and honesty at our past, recognizing error and seeking forgiveness.”

The division among Christians, he said, goes against Christ’s will for his disciples, weakens their ability to serve the world and often makes it difficult for others to believe Christianity is a religion of peace and fraternity.

The Gospel reading at the service, from John 15, was about Jesus being the vine and his disciples being the branches. In his homily, Rev. Junge said that too often over the past 499 years, Catholics and Lutherans saw each other “as branches separated from the true vine, Christ.”

Yet, he said, “Jesus never forgot us, even when we seemed to have forgotten him, losing ourselves in violent and hateful actions.”

After 50 years of Catholic-Lutheran dialogue, Rev. Junge said, “we acknowledge that there is much more that unites us than that which separates us. We are branches of the same vine. We are one in baptism.”