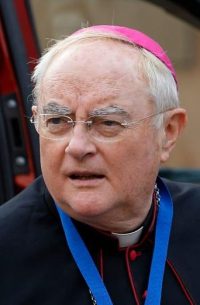 WARSAW, Poland (CNS) — Poland’s Catholic Church has reiterated support for stricter pro-life controls, after parliamentarians voted down a law that would have sent aborting mothers to jail.

“Human life has such great value. It shouldn’t be the object of political bargains,” said Archbishop Henryk Hoser of Warsaw-Praga, chairman of the Polish bishops’ bioethics committee.

“This draft bill may have needed some corrections, but it was prepared solidly enough. Its rejection leaves us in the same situation as before,” he said.

The church leader’s comments to Poland’s Catholic Information Agency came after the Warsaw parliament’s Oct. 6 rejection of the “Stop Abortion” bill, 352-58, with 18 abstentions. The legislation would have banned all abortions unless a woman’s life was in danger.

Meanwhile, the Polish bishops’ conference said the sanctity of human life had been stressed by St. John Paul II, but cautioned that the church would not support laws that allowed aborting women to be punished.

“Church institutions don’t deal with civil law projects, although they use their right to express opinions on proposed legal regulations,” the conference said in an Oct. 6 statement.

“We encourage prayers for women who fulfill the motherhood vocation in their lives, as well as for those facing hardships,” the statement added.

Poland’s 1993 law, one of Europe’s tightest, restricts abortion to cases of rape, incest, severe fetal damage or threats to a woman’s life, and has cut registered terminations, according to Health Ministry data, to around 1,000 nationwide per year.

Church leaders have threatened to deny sacraments to politicians supporting liberalization, and backed the Stop Abortion project when it was presented in March to the 460-seat parliament, where the conservative Law and Justice party has held a majority since winning the October 2015 elections.

The citizens’ legislation, drafted by Poland’s Ordo Iuris Institute for Legal Culture with 450,000 signatures, would have outlawed abortions even in rape cases, with penalties of five years in jail for mothers and doctors, and 10 years if force was involved.

It was protested Oct. 3 by up to 100,000 women, dressed in black, who staged strikes and rallies across Poland, but supported by rival pro-life demonstrations, as well as in church Masses.

The Catholic chairwoman of the pro-life Forum of Polish Women, Ewa Kowalewska, told KAI Oct. 3 that her organization had “protested decisively” against the projected jailing of women, adding that she believed the Stop Abortion bill had been drawn up by “young inexperienced lawyers.”

However, in his interview, Archbishop Hoser said the bill’s rejection had left a “legal regime hard to accept” and that the church would continue demanding tougher abortion curbs.

“The fact that the church tackles this difficult problem via the sacramental path doesn’t mean women having abortions are guiltless,” the archbishop said.

The head of Law and Justice, Jaroslaw Kaczynski, blamed the bill’s rejection Oct. 6 on “a gigantic misunderstanding,” and said his party would also continue defending life “in a more thought-out way.”

NEXT: Pope names 17 new cardinals from 11 countries, including three from U.S.