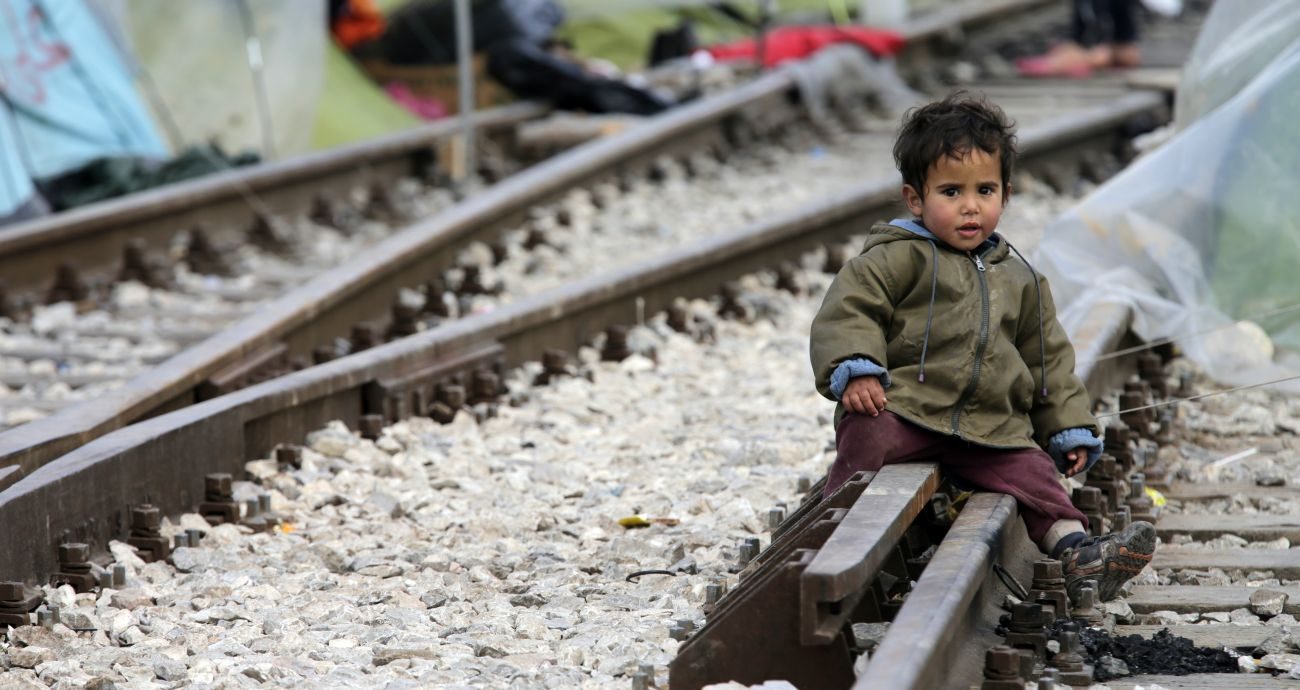 A child sits on railroad tracks near a makeshift camp for migrants in late March at the Greek-Macedonian border near the village of in Idomeni, Greece. Children are the most vulnerable and hardest hit among the world' s migrants and require special protection, Pope Francis said. (CNS photo/Armando Babani, EPA)

VATICAN CITY (CNS) — Children are the most vulnerable and hardest hit among the world’s migrants and require special protection, Pope Francis said.

“Children are the first among those to pay the heavy toll of emigration, almost always caused by violence, poverty, environmental conditions, as well as the negative aspects of globalization,” he said.

“The unrestrained competition for quick and easy profit brings with it the cultivation of perverse scourges such as child trafficking, the exploitation and abuse of minors and, generally, the depriving of rights intrinsic to childhood as sanctioned by the International Convention on the Rights of the Child,” he said.

The pope made the comments in a message on the theme of “Child Migrants, the Vulnerable and the Voiceless” for the World Day for Migrants and Refugees 2017; the text was released at the Vatican Oct. 13.

The World Day for Migrants and Refugees is observed Jan. 15. In the United States, National Migration Week will be celebrated Jan. 8-14.

In his message, the pope called for greater protection and integration of immigrants and refugees who are minors, especially those who are accompanied.

Minors are especially fragile, vulnerable and often invisible and voiceless — unable to claim or unaware of their rights and needs, he said.

In particular, they have “the right to a healthy and secure family environment, where a child can grow under the guidance and example of a father and a mother; then there is the right and duty to receive adequate education, primarily in the family and also in the school,” the pope said. Unfortunately, “in many areas of the world, reading, writing and the most basic arithmetic is still the privilege of only a few.”

Christians must offer a dignified welcome to migrants because every human being is precious and “more important than things,” the pope said. “The worth of an institution is measured by the way it treats the life and dignity of human beings, particularly when they are vulnerable, as in the case of child migrants.”

He urged long-term solutions be found to tackle the root causes of migration such as war, human rights violations, corruption, poverty, environmental injustice and natural disasters.

In so many of these scenarios, Pope Francis said, “children are the first to suffer, at times suffering torture and other physical violence, in addition to moral and psychological aggression, which almost always leave indelible scars.”

Among the many factors that make migrants, especially children, more vulnerable, and need to be addressed are: poverty; limited access to the means to survive; “unrealistic expectations generated by the media”; poor literacy; and ignorance about the law, culture and language of host countries, he said.

“But the most powerful force driving the exploitation and abuse of children is demand. If more rigorous and effective action is not taken against those who profit from such abuse, we will not be able to stop the multiple forms of slavery where children are the victims,” he said.

Immigrant adults must cooperate more closely with host communities “for the good of their own children,” he said.

Countries need to work together and communities need to offer “authentic development” for all boys and girls “who are humanity’s hope,” he said.

Saying inadequate funding often “prevents the adoption of adequate policies aimed at assistance and inclusion,” the pope said that instead of programs that help children integrate or safely repatriate, “there is simply an attempt to curb the entrance of migrants, which in turn fosters illegal networks” or governments forcibly repatriate people without any concern “for their ‘best interests.'”

While nations have the right to control migration and protect and safeguard their citizens, Pope Francis said it must be done while carrying out “the duty to resolve and regularize the situation of child migrants,” and fully respecting the rights and needs of the children and their parents “for the good of the entire family.”

The pope praised the “generous service” of all those who work with minors who migrate, urging them to “not tire of courageously living the Gospel, which calls you to recognize and welcome the Lord Jesus among the smallest and most vulnerable.”

Speaking to reporters at the Vatican press office, Cardinal Antonio Maria Veglio, president of the Pontifical Council for Migrants and Travelers, said Christians cannot be xenophobic and they cannot refuse to help welcome immigrants.

While it is impossible for one country “to receive everyone,” he said, that doesn’t mean the problem will be solved by telling immigrants to leave or saying that no one may come.

“It’s a problem that needs to be solved, seek a solution,” he said.

Unfortunately, the cardinal said, people tend to be self-centered and bothered by the presence of “the other.” People prefer to keep to their “ivory tower, their gilded cage and do not want any disturbance” or threats to “the beautiful things we have.”

“This is egoism. This is not human or Christian,” he said.

PREVIOUS: Christians who reject all refugees are ‘hypocrites,’ pope says