Christians who reject all refugees are ‘hypocrites,’ pope says 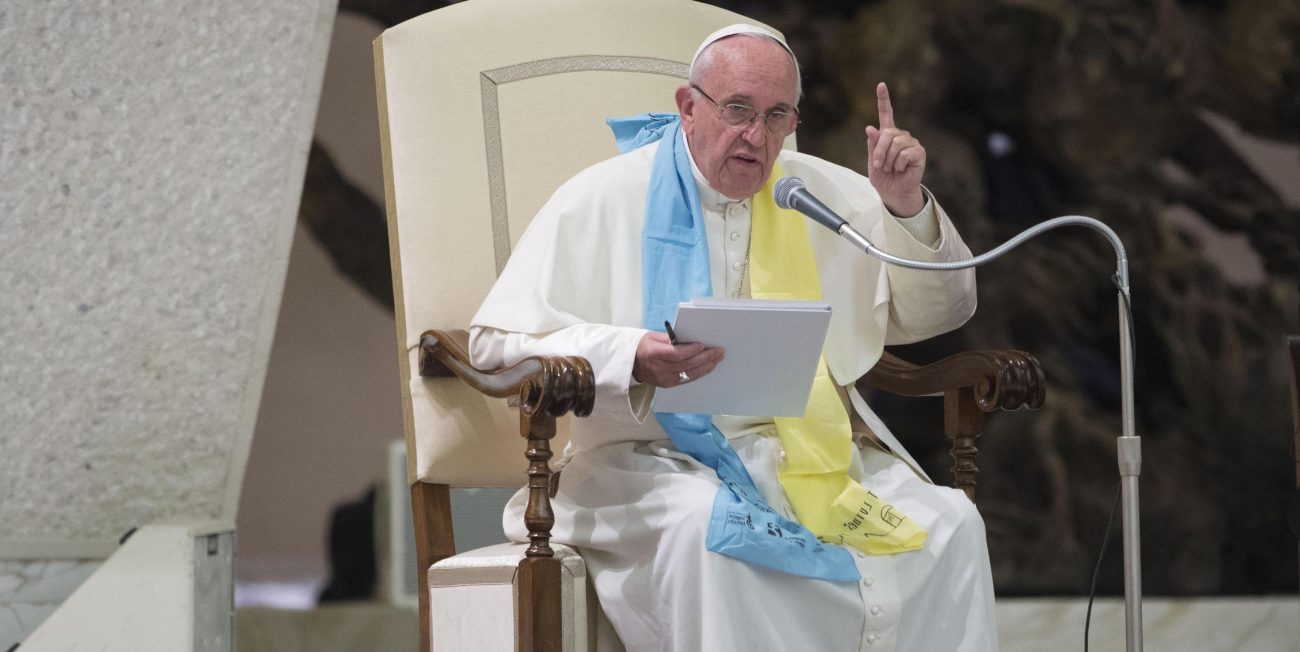 Pope Francis speaks during an Oct. 13 audience with a pilgrimage of Catholics and Lutherans from Germany in the Paul VI hall at the Vatican. (CNS photo/Giorgio Onorati, EPA)

VATICAN CITY (CNS) — Meeting a pilgrimage of Catholics and Lutherans from Germany, Pope Francis said he does not like “the contradiction of those who want to defend Christianity in the West, and, on the other hand, are against refugees and other religions.”

“This is not something I’ve read in books, but I see in the newspapers and on television every day,” Pope Francis said.

Answering questions from young people in the group Oct. 13, the pope said, “the sickness or, you can say the sin, that Jesus condemns most is hypocrisy,” which is precisely what is happening when someone claims to be a Christian but does not live according to the teaching of Christ.

“It’s hypocrisy to call yourself a Christian and chase away a refugee or someone seeking help, someone who is hungry or thirsty, toss out someone who is in need of my help,” he said. “If I say I am Christian, but do these things, I’m a hypocrite.”

Asked what he thought of the Reformation, Pope Francis said the Christian community is called to continual growth and maturity, and its entire history has been marked by reform movements “small and not so small,” some of which were healthy and holy, others which went awry because of human sin.

“The greatest reformers of the church are the saints, those men and women who follow the word of God and practice it,” he told the pilgrims, most of whom came from Martin Luther’s home region of Saxony-Anhalt.

In his formal talk to the group, Pope Francis said Christians must praise God that, in the past 50 years, Catholics and Lutherans have moved “from conflict to communion. We already have traveled an important part of the road together.”

Noting that he would go to Lund, Sweden, at the end of the month to participate with Lutheran leaders in opening commemorations of the 500th anniversary of the Protestant Reformation, Pope Francis said an important part of the commemoration would be a joint commitment to working together in a world “thirsting for God and his mercy.”

The world needs Christians to witness God’s mercy “through service to the poorest, the sick (and) those who have abandoned their homelands in search of a better future for themselves and their families,” he said.

“In putting ourselves at the service of the neediest,” Pope Francis said, “we will experience that we already are united; it is God’s mercy that unites us.”

PREVIOUS: Each Christian is a chosen child of God, pope says