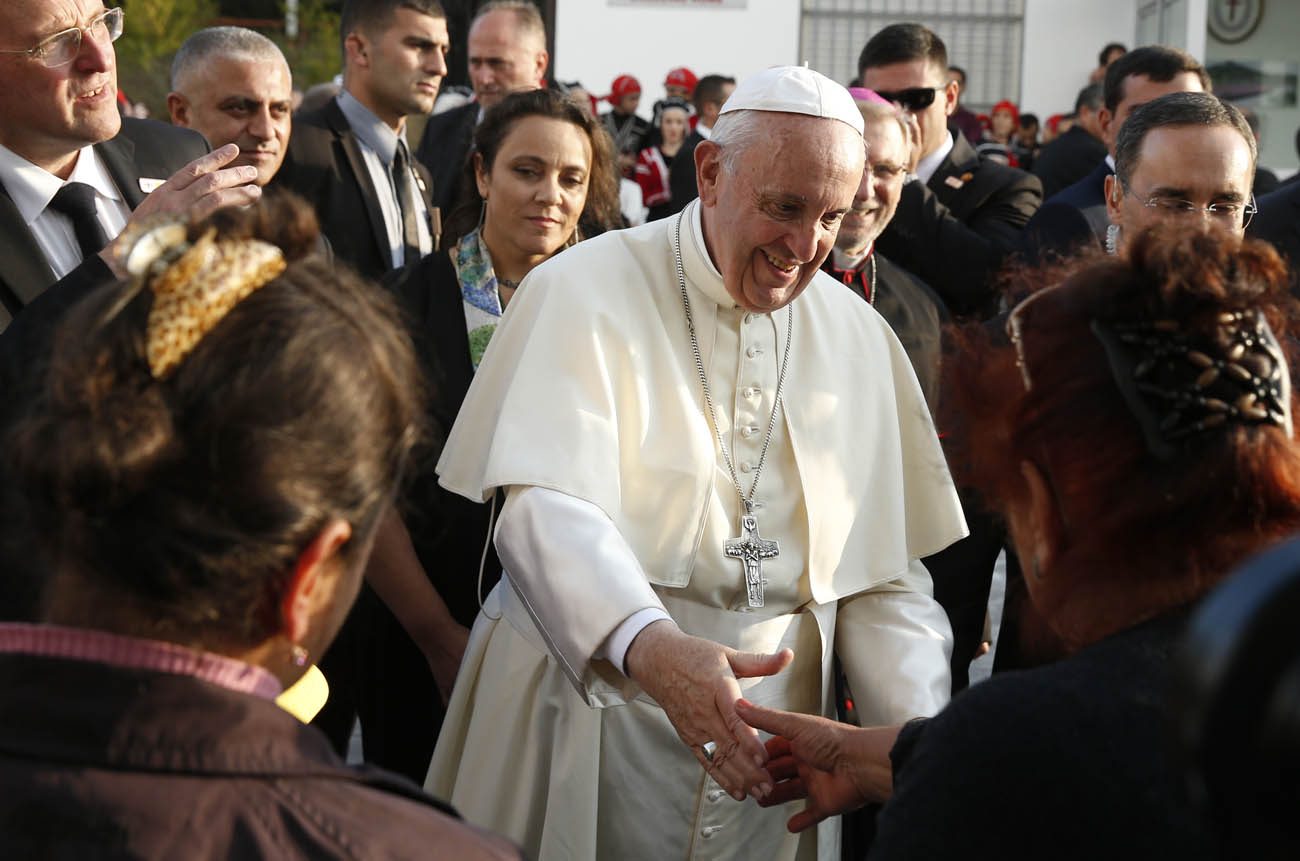 Pope Francis greets people during a meeting with volunteers and people receiving assistance from the Catholic Church near an assistance center run by the Order of St. Camillus in Tbilisi, Georgia, Oct. 1. (CNS photo/Paul Haring)

TBILISI, Georgia (CNS) — Pope Francis said a global war against marriage is underway and Catholics must respond by helping couples stay strong and by providing pastoral care to those experiencing difficulty.

“Today there is a global war to destroy marriage,” the pope said Oct. 1 during a meeting in Tbilisi with priests, religious, seminarians and laypeople active in parish life.

“Today you do not destroy with weapons, you destroy with ideas,” the pope said. “It is ideological colonization that destroys.”

The only way to defend marriage against the onslaught, he said, is to help couples “make peace as soon as possible, before the day ends, and don’t forget the three words: ‘May I?’ ‘Thank you’ and ‘Forgive me.'”

“Marriage is the most beautiful thing that God has created,” Pope Francis said. In marriage, man and woman become one flesh, “the image of God.”

“When you divorce one flesh you sully the God’s image,” he said.

A woman named Irina, who with her husband, Zurab, minister to other families and teach natural family planning, had told Pope Francis that Georgian families are experiencing new challenges brought by “globalization, which does not take into account local values, new views on sexuality like gender theory and the marginalization of the Christian vision of life.”

Gender theory usually refers to the idea that what constitute male and female characteristics are largely social and cultural constructs rather than being determined by biology.

Responding to Irina, Pope Francis said, “You mentioned a great enemy of marriage: gender theory,” but he did not elaborate.

Instead, he insisted Catholic clergy and faithful must do everything possible to assist couples experiencing difficulty. “Welcome, accompany, discern, integrate,” he said. “The Catholic community must help to save marriages.”

A seminarian identified only by his first name, Kote, asked Pope Francis how Georgian Catholics can promote better relations with the Orthodox.

“Let’s leave it to the theologians to study the things that are abstract,” the pope said. The question everyone else should be asking is: “What must I do with a friend who is Orthodox?”

The answer is fairly simple, he said. “Be open, be a friend.”

“You must never proselytize the Orthodox,” the pope said. “They are our brothers and sisters, disciples of Jesus Christ, but complex historic situations have made us like this,” separated for more than a millennium.

“Friendship. Walk together, pray for each other, and do works of charity together when you can,” he said. “This is ecumenism.”

From the meeting at the Church of the Assumption near the center of town, Pope Francis went to Temka, a much poorer neighborhood on the outskirts of Tbilisi. He visited a clinic and rehabilitation center run by the Order of St. Camillus that is set in the midst of towering, flaking concrete apartment blocks from the Soviet era.

Before the pope arrived, local children — some with professional-level talents — sang and danced for the crowd. But, no matter the skill level, everyone was rewarded with thundering applause.

Staff and volunteers of from Caritas Georgia and the Missionaries of Charity sisters who care for the patients with more severe handicaps joined the Camillian fathers and their benefactors in welcoming the pope.

Pope Francis told those facing physical challenges, “God never turns away; he is always close to you, ready to listen, to give you his strength in times of difficulty.

“You are the beloved of Jesus, who wished to identify himself with all who suffer,” the pope said.

To the staff and volunteers, Pope Francis said works of service and charity are “a witness to communion and a means of fostering the way of unity.”

PREVIOUS: When political choice is tough, pray and vote your conscience, pope says

NEXT: Dialogue, respect for differences are key to progress, pope says