When political choice is tough, pray and vote your conscience, pope says 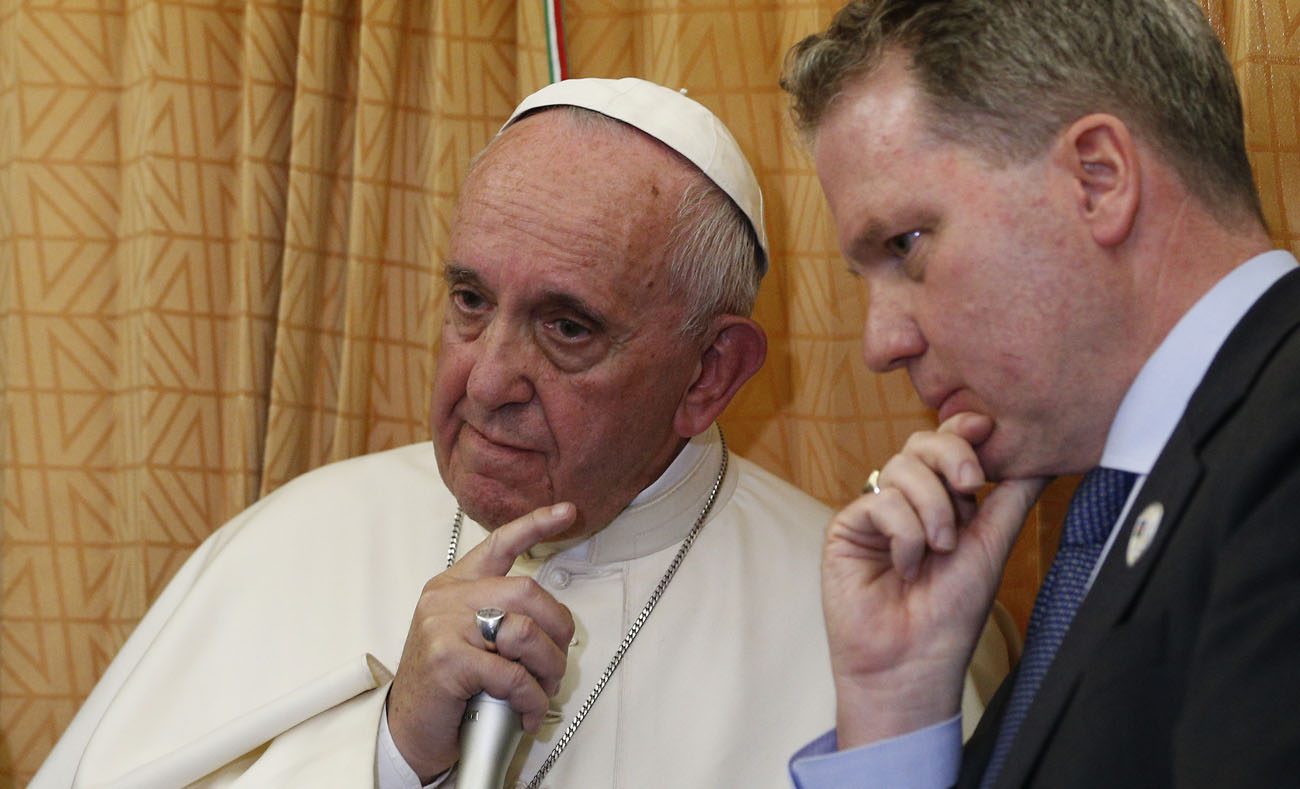 Pope Francis and Greg Burke, the new Vatican spokesman, listen to a reporter's question about the U.S. presidential election aboard the pope's flight from Baku, Azerbaijan, to Rome Oct. 2. (CNS photo/Paul Haring)

ABOARD THE PAPAL FLIGHT FROM AZERBAIJAN (CNS) — Catholics facing difficult political choices must study the issues, pray about the election and then vote according to their consciences, Pope Francis said.

Flying back to Rome from Azerbaijan Oct. 2, the pope was asked by a reporter what U.S. Catholics should do in a presidential election where both candidates hold some positions contrary to church teaching.

Although he was in a relaxed mood and welcomed reporters’ questions for almost an hour, Pope Francis said he would never comment on a specific electoral campaign.

“The people are sovereign,” he said. “Study the proposals well, pray and choose in conscience.”

Pope Francis also was asked when he would name new members to the College of Cardinals and what criteria he would use to choose them.

He said he still had not decided precisely when to announce the names or hold the consistory to create the new cardinals, but it would likely be at the end of this year or the beginning of 2017.

As for the choices, Pope Francis said, the list of worthy candidates is long, “but there are only 13 places” to reach the limit of 120 cardinals under the age of 80.

The selection process will aim for a geographic mix, he said. “I like it when one can see in the College of Cardinals the universality of the church, not just the European center, shall we say.”

Although he and the reporters traveling with him had not yet returned to Rome and already were set to go to Sweden Oct. 31-Nov. 1, a journalist asked the pope where he would be traveling in 2017.

A trip to Fatima, Portugal, is definite, he said. He intends to go May 13 to celebrate the 100th anniversary of the apparitions of Our Lady of Fatima.

Also on the calendar, the pope said, is a trip to India and Bangladesh and another trip to Africa, although the specific nation or nations has not been decided.

Asked about his promise to visit Colombia after peace was established in the country, Pope Francis said the peace agreement signed in September between the government and rebels was important, but the people of Colombia still have to vote to ratify the agreement and begin the real work of living in peace.

In addition, Pope Francis confirmed that he had spoken with Cardinal Angelo Amato, prefect of the Congregation for Saints’ Causes, about setting aside the usual five-year waiting period to allow the collection of eyewitness testimony regarding the murder in July of French Father Jacques Hamel as he celebrated Mass.

“It is very important not to lose the testimonies,” the pope said. “With time, someone may die, another forgets something.”

PREVIOUS: Vatican office holds meeting on role of women in the church