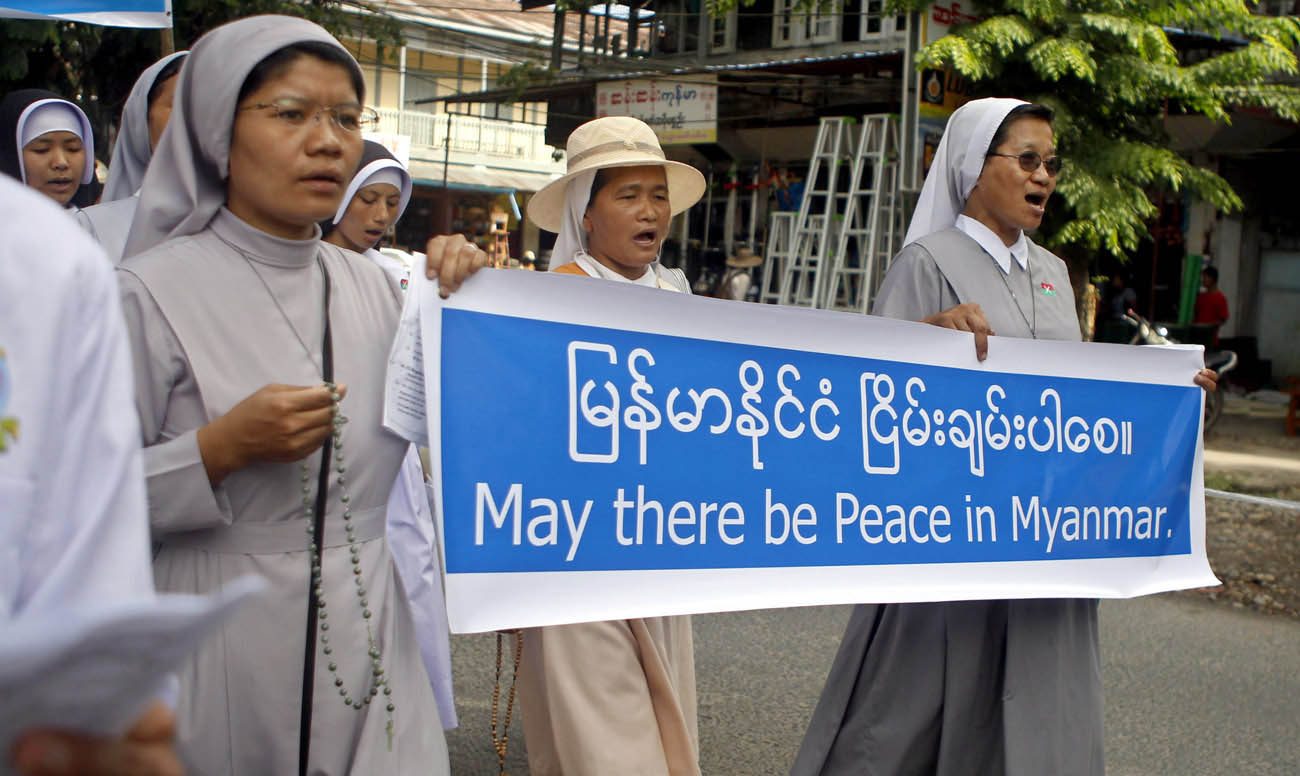 Nuns carry a banner reading "May there be peace in Myanmar" during an Oct. 22 protest in Myitkyina in opposition to the country's civil war. Retired Archbishop Paul Zinghtung Grawng of Mandalay said the Kachin people are "very fearful" and have "little hope of peace" any time soon. (CNS photo/Seng Mai, EPA)

DUBLIN (CNS) — The retired archbishop of Mandalay, Myanmar, said the Kachin people are “very fearful” and have “little hope of peace” any time soon. 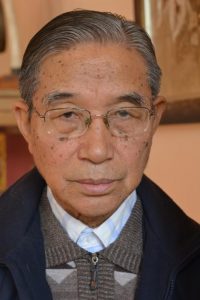 Archbishop Paul Zinghtung Grawng warned that peace remains out of reach for the people of Myanmar’s resource-rich Kachin state due to an ongoing military campaign waged against the people since 2011, when a 17-year cease-fire between the Myanmar’s military and the Kachin Independence Army ended.

The majority of the 1.7 million Kachin people are Christian, mainly Catholic or Baptist. They have endured discrimination and persecution at the hands of Myanmar’s authorities for decades, over their ethnicity and their faith.

The violence and insecurity of the past five years forced up to 120,000 Kachin from their homes into camps, which are often run by church groups.

Speaking to Catholic News Service in Ireland, Archbishop Grawng said the Kachin who are now in such camps “have no work and no security or permit to go back to their villages.”

“Some of parishes have no villagers left, they are all in the camps for five years. There is no privacy. It creates all sorts of problems. There is a hopelessness. And the children’s education is suffering,” he said.

Discussing the efforts of the Peace-talk Creation Group based in Myitkyina, the Kachin prelate said the church was very much involved in efforts to foster dialogue and peace and also to address the food shortages in villages and in the camps through the Karuna Mission Social Solidarity, the church’s local branch of Caritas.

“For a long time, Karuna-Caritas was not allowed into some places, but finally some food was able to be sent. It is the army who is in control of the situation — the army doesn’t want peace, and so the fighting goes on. They have used planes to bomb some areas.”

In March 2016, Htin Kyaw of the National League for Democracy was sworn in as president, heading up the first democratically elected government after decades of military rule. The transition heralded hope for an improvement for Myanmar’s ethnic minorities. But Archbishop Grawng said while the situation has improved, many challenges remain.

“The government itself and Aung San Suu Kyi (are) very much for dialogue, but not the army. While peace talks are going on here, they are fighting there. And the people live in fear. They don’t see any hope of any peace coming soon. It is still very difficult now.”

Archbishop Grawng was the first ethnic Kachin ordained a priest. He was consecrated bishop of Myitkyina in 1976 and became archbishop of Mandalay in 2003.

“It is not resolved. It was stopped because the whole country was against it because many towns and civilizations along the Irrawaddy River would have suffered. Those opposed to the dam said it would cause the river to dry up in many places and that travel up and down the river would be impossible,” the archbishop said. “Another issue is that there would be less water at the mouth of the river, where it goes into the ocean and that sea water would come in and destroy the land.”

He said a committee is studying the potential risks and could decide on an adapted version of the plan.

The 77-year-old said Kachins are challenged to respond to “the volatile situation in Kachin (state) as Christians. In asking for autonomy, it has to be in a true Christian way. Kachin state is comprised of many races, and autonomy could not be built on a racial basis, but on human rights and mutual respect.”

Archbishop Grawng told CNS he believes the country’s current political leadership wants change for Myanmar. Referring to its emphasis on transparency, he said proceedings in parliament are now broadcast live, “so you can see who is saying what.” Government newspapers, he said, are now more objective, and there has also been a boom in privately owned newspapers.

“Democratization is supported. So there is a lot of hope. But the army can take over any time,” he added.

“I think the problem now is corruption,” partly stemming from the fact that in 1965, when all schools were nationalized, no religion or moral code was taught in schools, he said. “The minds of the people need to be formed, and that will take a generation at least.”

NEXT: Madrid cardinal-designate seen as walking ‘path where the people are’