Walking the talk: Catholics, Anglicans work together as they seek unity 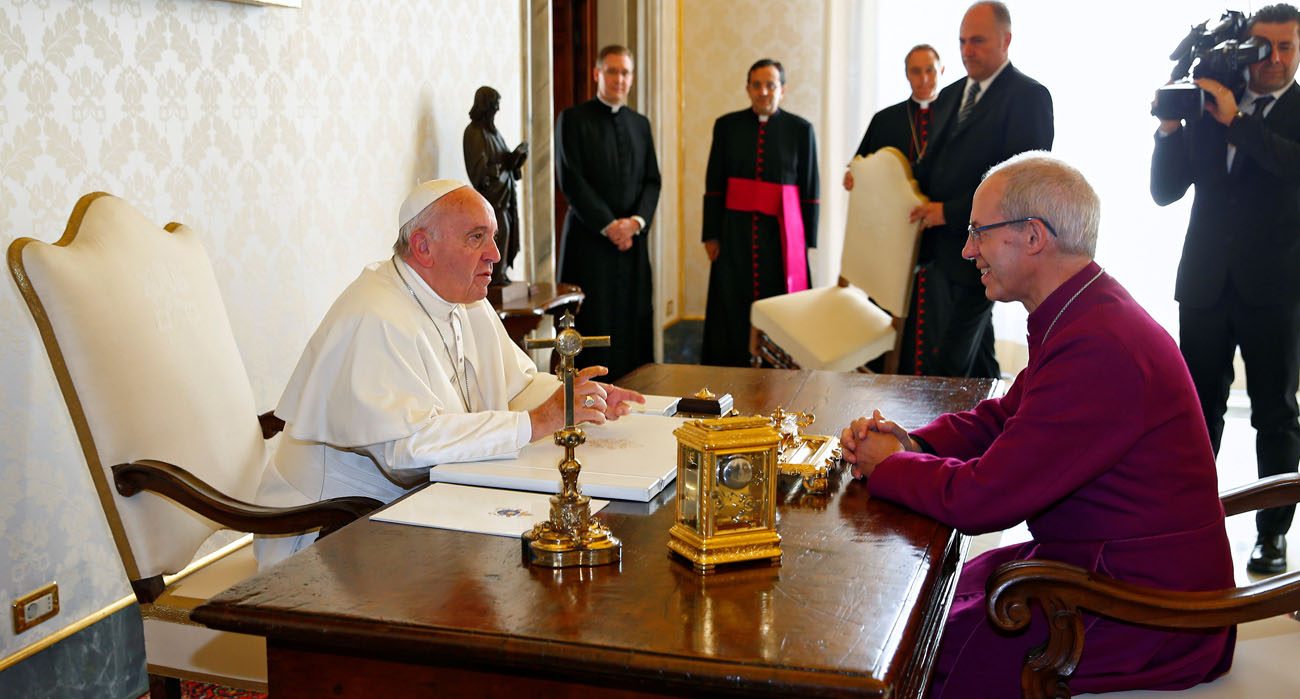 VATICAN CITY (CNS) — If Christians are called to live their faith concretely, then they cannot leave out concrete signs of the unity to which Jesus calls them.

And just because the formal Anglican-Roman Catholic theological dialogue has been forced to grapple with new church-dividing attitudes toward issues such as the ordination of women and the blessing of same-sex marriages, it does not mean that common prayer led by Anglican and Catholic leaders and concrete collaboration by Catholic and Anglican parishes are simply window dressing.

Dozens of Catholic and Anglican bishops and several hundred priests and laity from both communities gathered in Rome in early October to celebrate the 50th anniversary of the Vatican meeting of Blessed Paul VI and Anglican Archbishop Michael Ramsey of Canterbury, almost 50 years of formal theological dialogue through the Anglican-Roman Catholic International Commission (known as ARCIC) and the 50th anniversary of the Anglican Center in Rome.

The celebrations, highlighted by an ecumenical evening prayer service Oct. 5 with Pope Francis and Anglican Archbishop Justin Welby of Canterbury, coincided with a meeting of a newer body, the International Anglican-Roman Catholic Commission for Unity and Mission, known as IARCCUM.

The commission brought together 19 pairs of Anglican and Roman Catholic bishops from the same country or region to examine how, acting together, they could witness to the faith and serve those in need locally and recommend ways for Catholics and Anglicans globally do to the same.

Canadian Archbishop Donald Bolen, the Catholic co-chair of IARCCUM, said the common theological agreements forged by ARCIC and accepted by both churches, were never meant to sit on a library shelf, but “to transform our communities.”

“Every agreement of faith we register” should translate into “common prayer, common witness, common study, common mission, a common ecclesial life,” said the archbishop, who is about to be installed as head of the Archdiocese of Regina, Saskatchewan.

While sharing the Eucharist still is not possible, the IARCCUM process is designed to encourage Catholic and Anglican communities to do together everything possible based on the beliefs they share and on the conviction that mission and ministry to a divided world require a common Christian witness.

In his homily at the ecumenical evening prayer, Pope Francis urged Catholic and Anglican bishops, before undertaking any new initiative in their dioceses, to ask if it is possible to do the project together with their Catholic or Anglican neighbors.

As Pope Francis had said Oct. 1 in Georgia when asked about Catholic-Orthodox relations: “Let’s leave it to the theologians to study the things that are abstract.” Everyone else in the church should be asking how they can relate to other Christians as brothers and sisters.

The answer, he said, is: “Friendship. Walk together, pray for each other, and do works of charity together when you can. This is ecumenism.”

During a conference Oct. 5 at the Pontifical Gregorian University reviewing the work of both ARCIC and IARCCUM, Archbishop Bolen said, “You may say, and many have said, there are obstacles — including new obstacles — that separate us,” but those issues “shouldn’t really derail our ecumenical relations” because the relations are motivated by Jesus’ prayer that his followers be one so the world would believe.

The pairs of IARCCUM bishops, he said, had spent days discussing the challenges their people are facing: challenges of poverty; threats to human life, including euthanasia; a massive influx of refugees and migrants; war and violence; and increased secularization. “We need to be together. We need to build bonds of communion between our churches, and the world needs that.”

Anglican Archbishop David Moxon, director of the Anglican Center, said that through the work of ARCIC, “We have been given significant common ground on which to stand.” He listed the agreed areas of faith as including: baptism, belief in God as Trinity, the church as communion, and Scripture as the living word of God. Additionally, there is substantial agreement on the meaning of ordained ministry and on the Eucharist.

Paul Murray, a Catholic member of ARCIC, spoke about the ecumenical process as one involving prayer and friendship, “unpicking the knots” of past misunderstandings, recognizing legitimate differences and sharing the gifts and strengths one community sees in the other.

Basically, there is a sense of ecumenism leading to “loving desire for that which appears good and attractive in the other,” he said. “At its heart, ecumenism is about falling in love with the grace of God in the other.”

Paula Gooder, a biblical scholar, one of the “Six Preachers” at Canterbury Cathedral and an Anglican member of ARCIC, spoke of the conviction that progress in the theological dialogue is possible, but only if “we move away from wishing other traditions could be just like our own.”

Archbishop Welby told the conference that 50 years of Catholic-Anglican dialogue means members of the churches know that “we love one another. And at that point, we have to start talking honestly, more honestly to each other and not putting out the best china” or pretending to be only holy and healthy and strong.

Particularly by using the method of ecumenism espoused by IARCCUM, he said, Anglicans and Catholics can heal the wounds they have inflicted on each other and on the Body of Christ “not especially by looking at each, but by walking side by side into a wounded world and seeking to heal the world, and in so doing, finding we heal one another.”

NEXT: Pope chooses youths, vocational discernment as theme for next synod