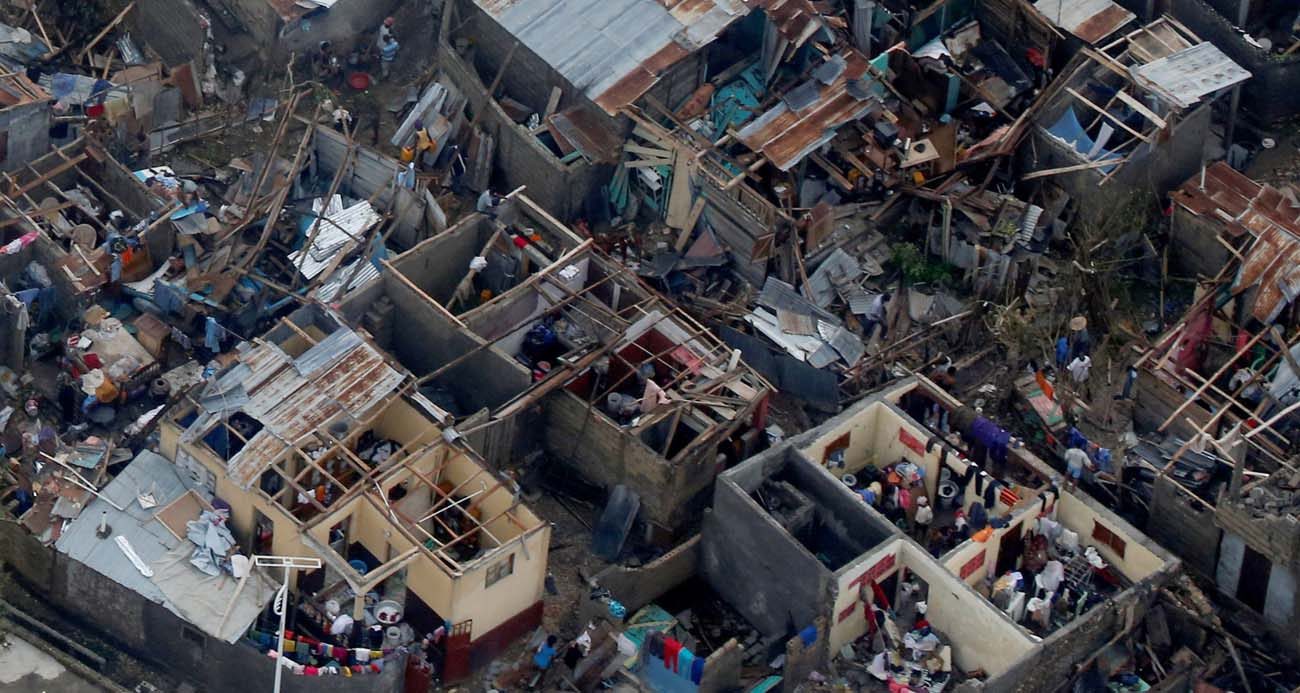 Destroyed homes are seen Oct. 5 after Hurricane Matthew swept through Jeremie, Haiti. Rescue workers in Haiti are struggling to reach parts of the country cut off by Hurricane Matthew, the most powerful Caribbean storm in nearly a decade. (CNS photo/Carlos Gar

WASHINGTON (CNS) — Haitian first responders and nongovernmental aid workers were assessing the damage from Hurricane Matthew even as they scrambled to deliver food, water and shelter materials to communities isolated by washed-out bridges and blocked roads.

The storm left southwestern Haiti in shambles after slamming into the country’s Caribbean coast Oct. 4. The cities of Les Cayes, on the southwest coast, and Jeremie, in the northwest, were said to be particularly hit hard by the strongest storm to strike the Caribbean region in a decade.

Water stood shoulder-deep in some communities. Electrical service, the internet and cellphone service disruptions were widespread. Makeshift wooden homes were splintered, and even concrete block houses were wrecked by the storm.

A bridge on the main road to the peninsula had been washed away, effectively isolating people living in the region southwest of Port-au-Prince, the capital.

Haitian officials said at midday Oct. 6 that at least 108 people had been killed. The number of casualties was expected to climb because Jeremie was said to have sustained heavy damage, and little information had been received from the area, said Mary Durran, Haiti program director for Development and Peace, the Canadian Conference of Catholic Bishops’ aid and development agency.

She said numerous nurseries that were preparing to harvest vegetables were destroyed by the storm and that Haitians were facing serious food shortages. Reports from one co-op, known as Determined Women, indicated that its crops were wiped out by winds and flooding, Durran said.

Chris Bessey, Haiti country director for Catholic Relief Services, told CNS that the agency’s staff had begun to distribute food, water and hygiene kits from its base in Les Cayes to people who lost their homes to the storm. He said assessments of the extent of damage continued the day after the storm.

Roads remained blocked by floodwaters, downed trees and mudslides, he said, making transportation in the city and outlying communities difficult.

The storm also affected CRS operations when winds tore off part of the roof of the agency’s offices and a warehouse in Les Cayes. After that, CRS staffers relocated to higher ground because of the threat of rising waters and were attempting to deliver emergency supplies, Bessey said.

“And we believe that part of the warehouse roof was also damaged. We’re hoping that that isn’t the case, because that is where we have some of the nonfood items,” Bessey said.

Caritas Haiti responded with hot meals, water and hygiene products. An emergency team was in place in Les Cayes before the storm hit and began distributing blankets, bedding and toiletry kits as the winds and rain subsided.

“The effect of the hurricane in the south of Haiti is catastrophic,” Father Jean-Herve Francois, Caritas Haiti director, said in a statement from the agency. “There have been deaths from drowning and collapsed buildings. Some communities are under water. Many buildings are damaged. People have lost everything.”

Among the greatest fears were water-related diseases and malnutrition. Aid workers reported that people lost stored food when their homes were destroyed. Farmers were preparing to harvest crops as the storm hit, but lost fields of vegetables and groves of mangos, bananas and avocados.

The government and aid workers also were concerned about the increased risk of cholera because of the heavy rains and the lack of access to clean drinking water. After the cholera rate declined for months, the country witnessed an increase in reported cholera cases in the first seven months of the year. With floodwaters and overflowing rivers, the conditions are set for a widespread outbreak of the water-borne disease in many corners of Haiti.

While Matthew’s effects in Port-au-Prince were not as severe, flooding posed problems for resident of Cite Soleil, the poorest community in the capital.

Salesian Missions called for relief supplies and cash donations to be sent to Haiti, where the organization has missionaries, schools and programs working in poor communities.

In an Oct. 5 statement, the Salesian Missions said aid agencies learned after the 2010 earthquake that “too many people were sent to Haiti” and that they were unprepared to properly help.

“Sending more adds to the number of people who need shelter, food and water. There are already organizations in Haiti, staffed by people who live there, who can assist. Only in rare occasions do additional people need to travel to Haiti,” the statement said.

After pounding Haiti, Matthew moved over easternmost Cuba, destroying dozens of homes in Baracoa and damaging hundreds of others, the Associated Press reported. Tweets from Baracoa seemed to indicate that fierce winds and a high storm surge did most of the damage.

Forecasters were watching the storm as it moved over the Bahamas and took aim on the southeastern United States. States of emergency were declared for all of Florida and coastal areas of Georgia, South Carolina and North Carolina.

NEXT: Walking the talk: Catholics, Anglicans work together as they seek unity