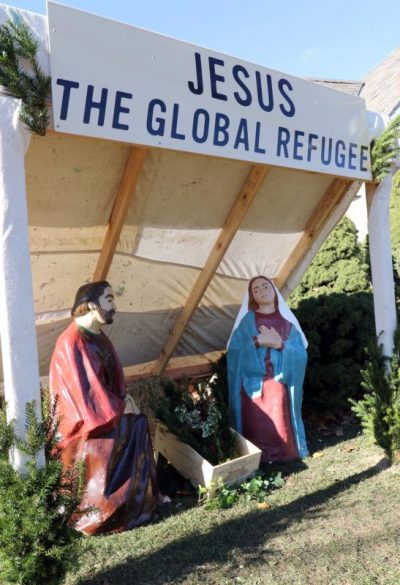 A creche titled “Jesus the Global Refugee” is seen outside Our Lady of the Miraculous Medal Church in Wyandanch, N.Y., Nov. 27. The structure, designed as a refugee’s lean-to, was created to call public attention to the biblical mandate to welcome immigrants and give shelter to refugees. (CNS photo/Gregory A. Shemitz)

NASHVILLE, Tenn. (CNS) — As the American people continue to unpack exactly what the election of Donald Trump means for the country, those who work with vulnerable populations such as refugees and immigrants have serious concerns and questions about what the future holds.

President-elect Trump made the issue of immigration one of the foundations of his campaign. He promised to round up those in the country without legal permission and deport them, and build a wall along the U.S.-Mexico border; he also talked about enacting a ban on Muslims entering the country until a system for what he called “extreme vetting” of refugees can be put in place.

In the days following Trump’s election as president, the Catholic Charities Office of Refugee Resettlement in the Diocese of Nashville began receiving calls from school counselors seeking assistance for how to talk with refugee children who are afraid of being sent back to the countries they fled. “These are calls we haven’t gotten before,” said Kellye Branson, Refugee Resettlement department director.

“We want to calm their fears,” Branson said, noting that anyone who arrived in the country through the refugee resettlement program is here legally and faces no imminent threat of deportation. However, “we’re kind of in a holding position, waiting to see what policy implications are for the future,” she told the Tennessee Register, Nashville’s diocesan newspaper.

While the world’s refugees wait and hope to be resettled in a more stable and secure country, those who work with refugees in Tennessee are taking steps to clear up misconceptions about who refugees are and the rigorous process they must undergo to reach the United States.

Refugees are defined as individuals who have had to leave their home country because of a well-founded fear of persecution. They are targeted because of their religious or political beliefs, or membership in a particular social class.

Branson pointed out that the refugee resettlement program “is the most secure way of entering the U.S. It’s a lengthy process.”

First, a refugee reports to a representative of the U.N. High Commissioner for Refugees. If a refugee is seeking entry into the U.S., he or she will undergo vetting from the Department of Homeland Security, the FBI and the State Department. This involves extensive interviews and background checks, with a particular focus on any signs of radicalization or connection with a terrorist group, which would immediately disqualify that person from entry into the U.S.

Branson understands that Americans are concerned about national security and the integrity of the refugee resettlement program.

“We want it to be secure too,” she said. “The people resettling are fleeing the same people we don’t want to enter the country. We want to safely and humanely resettle the people who have been persecuted most throughout the world.” She also noted that less than 1 percent of refugees worldwide ever get resettled.

One positive outcome of the election so far, Branson said, is a surge in calls from people interested in volunteering with the Refugee Resettlement office. In the two days following the election, her office received about 20 calls from interested volunteers, the same amount they normally receive in a month.

“Now more than ever, Americans and longtime residents are needed to reach out to our new arrivals and offer a hand of friendship and welcome,” Branson said.

If newly arrived refugees can make personal connections with American volunteers, it can make for a smoother transition to a new culture, help them learn English and make them feel like a part of the community more quickly. “Developing those connections is a huge thing for our clients,” Branson said.

Donna Gann, program coordinator of Immigration Services for Catholic Charities of Tennessee, said her clients are anxious as well. “There has been an increase in calls wanting to know what’s going to happen now,” she said.

Maggie McCluney, a caseworker with the agency’s Immigration and Hispanic Family Services, echoed Gann, saying that since the election, “it is especially difficult to keep up with inquiries. Many clients are concerned about deportation and separation of families. There is a lot of uncertainty.”

If clients have their paperwork in order and are applying for citizenship, “we are hopeful that any process currently pending will continue without (increased) scrutiny,” Gann said via email. “The only clients we are really concerned about are the DACA recipients,” Gann said, referring to those who are currently protected under Obama’s Deferred Action for Childhood Arrivals program. Many immigrants in the country without legal permission who fall under that protection were brought to the United States by their parents as young children and may not even remember living in their country of origin.

More than 720,000 of these young immigrants have been approved for that program, which protects them from deportation for two-year periods and grants them work permits. Since DACA was created by executive order, it could be rescinded by executive order under the new Trump administration, which officially begins with Inauguration Day Jan. 20.

During his campaign, Trump vowed to undo what he called Obama’s “overreaching” executive orders on immigration. “If the threats come to fruition, then they could be under removal proceedings,” Gann said of those currently protected under DACA and DAPA, the Deferred Action for Parents of Americans and Lawful Permanent Residents program. “That will be an issue we will continue to review and fight hard against,” she added.

Laurence is a staff writer at the Tennessee Register, newspaper of Diocese of Nashville.