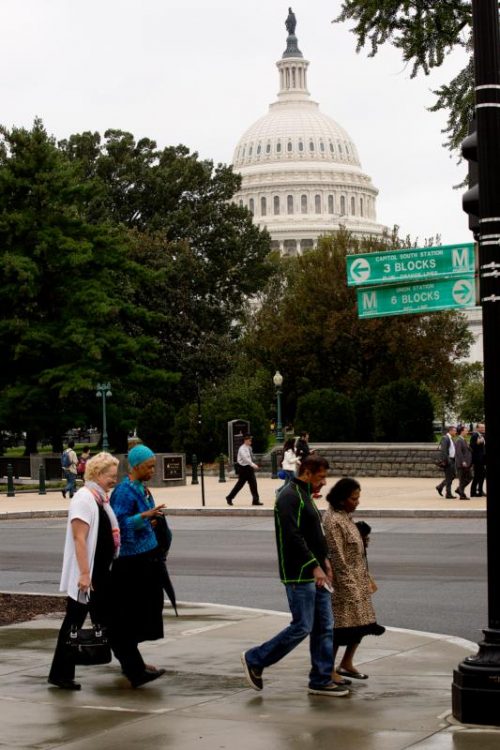 People walk near the U.S. Capitol in Washington Sept. 28. Catholic and other religious leaders have asked President Barack Obama and congressional leaders to “renounce publicly” a contentious sentence in the U.S. Commission on Civil Rights’ report that equates religious freedom with discrimination. (CNS photo/Tyler Orsburn)

WASHINGTON (CNS) — It’s time to move beyond the polarizing presidential campaign so that the basic needs of the unemployed, the world’s poor and the unborn can be addressed, said Catholics who consistently work with Congress and the White House.

While the advocates told Catholic News Service Nov. 9 the issues that they prioritize will not change, they will be looking for cues from President-elect Donald Trump’s transition team so that they can shape their messages on concerns as diverse as religious liberty, human dignity and climate change.

That requires putting aside the feistiness and anger that arose during the campaign, said officials from agencies such as the U.S. Conference of Catholic Bishops, Catholic Relief Services and Catholic Charities USA and advocacy groups Jubilee USA and Network, a Catholic social justice lobbying group.

“Two priorities that we have are unity and governance,” said Jonathan Reyes, executive director of the USCCB Department of Justice, Peace and Human Development. “So this divisive election, we somehow have to get to the other side. That will not be easy, but it’s essential to governance.”

Healing and unity must be achieved among elected officials as well as voters, he said.

“We certainly and constantly hope that regardless of party affiliation, that an elected official uses the power of their office to bring people together, break down silos and help the most vulnerable,” Corbin said.

How quickly the healing occurs remains to be seen. Reyes said the Catholic Church and its agencies are positioned to help build the understanding the country needs.

“The bishops have done a good job of being honest brokers. We try to stay as above the fray as we can and say what’s true from the level of principles, give arguments to the things we support according to principle,” Reyes said.

“The whole point of the church’s voice is to be that voice that can have some credibility for being consistent,” he added.

Officials who work on legislative issues for Catholic Relief Services and Catholic Charities USA are looking to learn more about the future Trump administration’s positions on a variety of fronts.

Bill O’Keefe, vice president for government relations and advocacy at CRS, said the agency has closely worked with congressional Republicans and Democrats on foreign assistance bills funding HIV/AIDS treatment, human trafficking and hunger. O’Keefe said he hopes those good relations will carry over to the Trump administration, especially when it comes to the effects of climate change on poor farming communities and the need to assist refugees from the world’s war zones.

He acknowledged that Americans, Catholics in particular, are concerned about the lives of poor and marginalized people.

“The incoming administration does not have a clear record on many of these issues and we do look forward to contributing our Catholic experience and our approaches as they form their plans and policies,” O’Keefe told CNS. “We will be seeking meetings with the (Trump) transition team and with the objective of sharing our experience and helping them see the importance of the really wonderful bipartisan efforts to help the poor around the world.

“The U.S. has a moral responsibility that has long been enshrined by the teaching of our bishops to help those around the world and we will be urging the new administration to assume this mantle of responsibility,” O’Keefe said.

The same holds true on the importance of addressing domestic needs, said Corbin.

“People really don’t want people to be poor,” he said.

“As we’ve done for 100 years or more, Catholic Charities will continue to work in a bipartisan and bicameral fashion with the House and the Senate and the administration,” he said hours after Trump’s win was confirmed.

“Helping families and persons who are poor is a nonpartisan issue. Everyone should have a stake in it and should in best faith,” Corbin told CNS.

Although the election is passed, the U.S. bishops’ quadrennial document on “Faithful Citizenship” can continue to serve as a postelection guide, said John Carr, director of Georgetown University’s Initiative on Catholic Social Thought & Public Life.

“I think the church needs to be political but not partisan,” Carr explained. “Politics is where decisions about life and death and war and peace are made. The church needs to be principled but not ideological. We can’t give in on respect for life or having a priority for the poor. But we can work with those who are willing to work with us to advance those principles.

Two other advocates said the anger that many voters have felt and that seemingly resulted in Trump’s unexpected White House victory will not be easy for the country to overcome.

Eric LeCompte, a Catholic who is executive director of Jubilee USA, and Sister Simone Campbell, executive director of Network, would like to see the new Congress and the incoming administration go to the people who have felt neglected by the country’s policies on jobs and trade especially.

“Part of what this election shows is there is deep suffering in the country and there are so many people left out by the political system and the economic system,” LeCompte explained to CNS.

Sister Campbell said the anger that fueled the Trump victory “is based on the result of failed economic policies” since the 1980s. “It has left a swath of our nation struggling,” she said.

In one sense, LeCompte hopes that the practices of predatory hedge funds, trade agreements that fail to consider the needs of workers, and corporate tax avoidance that his agency has addressed with Congress and past White House administrations will resonate with Trump’s staff. They are issues Trump has touched on during his campaign rallies in states with large blue-collar communities.

“We expect all of our issues we work on in terms of how the global economic system works (will receive) a welcome from the White House,” LeCompte said.

Sister Campbell, a member of the Sisters of Social Service, expressed concern for what she called “race and gender undertones” that arose during the election and stressed that the country must come to grips with its growing diversity by upholding the dignity of people of different backgrounds and skin colors.

She said initial polling data indicate that white voters felt “unseen” and their concerns have been ignored by the nation’s political and economic institutions despite the fact that the color of their skin gives them privileges that people in minority communities may not enjoy as readily.

“The challenge is to engage the continuing sin of racism in our nation which is about how we walk in our white skin,” Sister Campbell said. “We should not feel guilty about (white privilege) but extend the same privilege to everybody.”

NEXT: On state ballot measures, voters reject most issues of Catholic concern