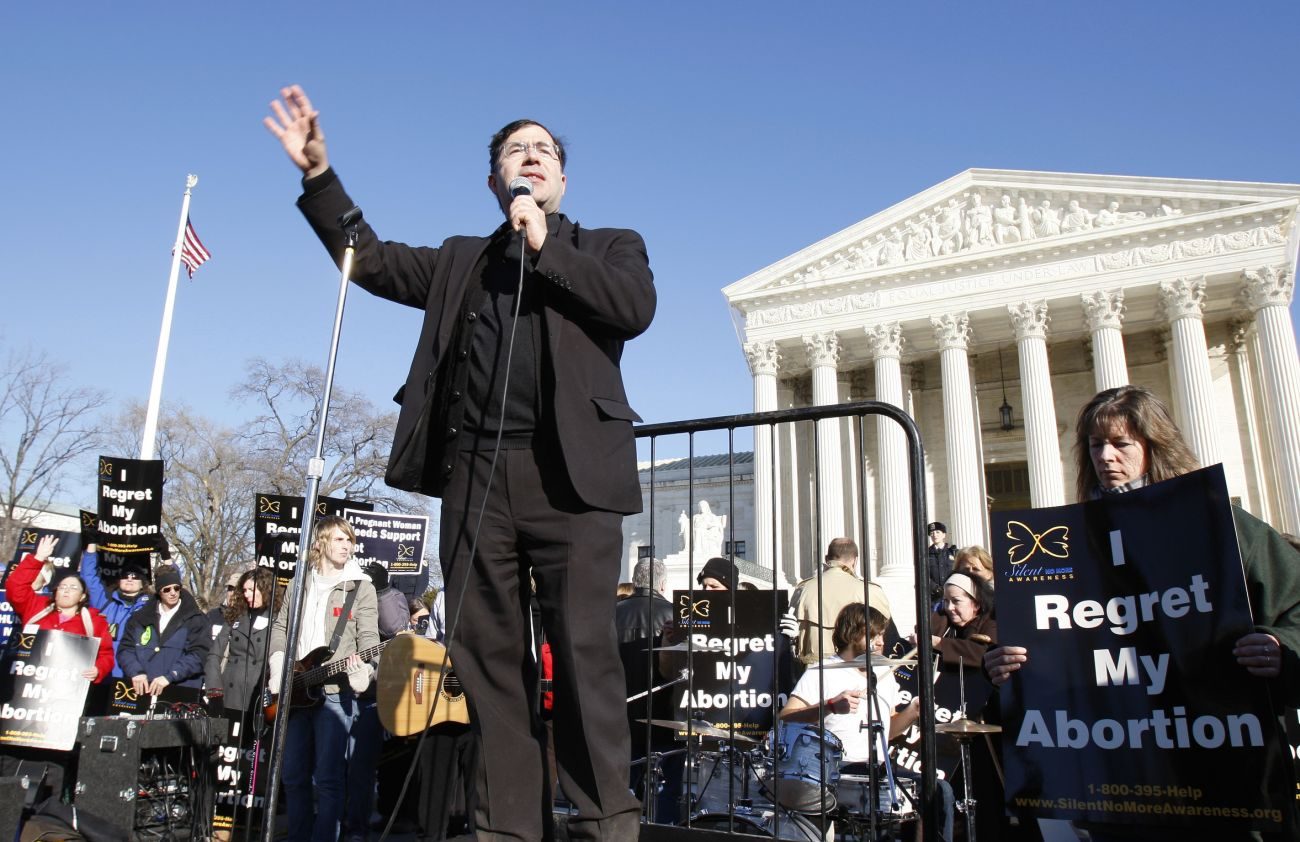 Father Frank Pavone, national director of Priests for Life, speaks in front of the U.S. Supreme Court at the 2009 March For Life in Washington. Pro-life supporters have denounced Father Pavone over a controversial election Facebook Live video he posted. (CNS photo/Bob Roller)

WASHINGTON (CNS) — The Diocese of Amarillo, Texas, said in a statement it is investigating the incident of a pro-life priest who placed “the body of an aborted fetus” on an altar and broadcast it on Facebook Live to get people to vote for Republican Donald J. Trump, causing “the desecration of the altar.”

“We believe that no one who is pro-life can exploit a human body for any reason, especially the body of a fetus,” said Amarillo Bishop Patrick J. Zurek in a Nov. 8 statement. Its use for political purposes by one of the diocese’s priests was “against the dignity of human life,” he added.

Pro-life supporters in the Catholic Church denounced activist Father Frank Pavone for what he said was an “emergency situation” on the eve of the U.S. presidential election.

“What did he do?” wrote Ed Mechmann, a public policy director whose areas of concern include pro-life issues, in a blog for the Archdiocese of New York. “He used a dead aborted baby, laying naked and bloody on an altar, as a prop for his video.”

But Father Pavone, no stranger to controversial situations, said he was trying to drive home, in a visual and impactful way, what it meant to choose one presidential candidate over the other on Election Day. Father Pavone, appealing for votes for Trump, said he was showing “the Democrats’ support of baby-killing.”

“I’m showing the reality,” he said in an interview on Election Day with Catholic News Service. Father Pavone is a member of Trump’s Catholic advisory group. 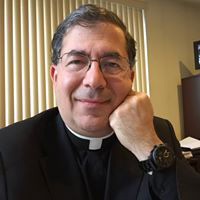 Father Frank Pavone, of the Diocese of Amarillo, Texas. (Photo from Facebook)

Bishop Zurek said the diocese “deeply regrets the offense and outrage caused by the video for the faithful and the community at large. The action and presentation of Father Pavone in this video is not consistent with the beliefs of the Catholic Church.”

Many agreed with the bishop, saying what Father Pavone did, how he did it and where he did it — a body on an altar via Facebook Live — amounts to desecration of a body and also is sacrilegious because it was done on an altar, which should be used only for sacramental purposes, not to advance a political candidate.

“When a photo of a pro-life priest with a naked corpse of an unborn child on an altar is used to get out the vote, it’s time to say: ENOUGH!” wrote Dominican Father Thomas Petri of Washington on Twitter Nov. 7.

Mechmann, of the New York Archdiocese, wrote: “It is hard for me to express in calm, measured terms, the revulsion I feel about this.”

But Father Pavone said that everyone should be repulsed by the act of abortion and that’s what he was trying to show.

“You can’t do it with words,” he said, about why he chose to do a Facebook Live video.

Father Pavone said he was alone, in a chapel with the body, which he said was given to him by a pathologist who had received it from an abortion clinic.

“This person had enough of a conscience to say, ‘I’m not going to throw it away’ and gave the body to a pastor, and the pastor, knowing my role, contacted me and we both arranged to honor the child with a viewing,” he said.

But the viewing was a very public affair. By Election Day, it had been viewed 707,000 times. Father Pavone said he has apologized to those who were offended and has posted an apology but has not taken down the video. Church members need to communicate with one another instead of posting criticism publicly, he said referring to criticism from Mechmann, adding that anger should be directed at Democrat Hillary Clinton, who supports abortion.

He said he doesn’t see what he did as desecration or improper in any way.

“I don’t know what in the world these people are talking about,” he said. “What did I put on the altar? This is a human child.”

He said he has bishop advisers and canonical advisers, as well as legal advice, when he undertakes actions that help him advance his cause against abortion.

“I am always welcoming advice,” he said.

In 2014, New York Cardinal Timothy M. Dolan cut ties with Father Pavone and his group Priests for Life, saying the priest refused to allow an audit of the group’s finances. Priests for Life is based in Staten Island, New York. In the statement from the diocese, Bishop Zurek said Priests for Life “is not a Catholic institution, but a civil organization, and it is not under the control or supervision of the Diocese of Amarillo.”

Father Pavone was ordained a priest of the New York Archdiocese in 1988 but was incardinated into the Amarillo Diocese in 2005 by Bishop John W. Yanta, then head of the diocese, who served on the organization’s board of advisers. In 2012, the Vatican Congregation of the Clergy issued a decree allowing Father Pavone to minister outside the Diocese of Amarillo, but he still must obtain specific permission to do so from Bishop Zurek.

Father Pavone told CNS the bishops have never supported his work, and he was not concerned about repercussions out of Amarillo.

“I don’t belong in Amarillo, to tell you the truth,” he said. “The bishop (Yanta) invited me. I have no reason to be there.”

The Catholic blog Patheos, whose bloggers denounced Pavone in several posts over the incident, pointed out that the Code of Canon Law spells out how the altar should be used and that Canon 1239 says that it “must be reserved for divine worship alone.”