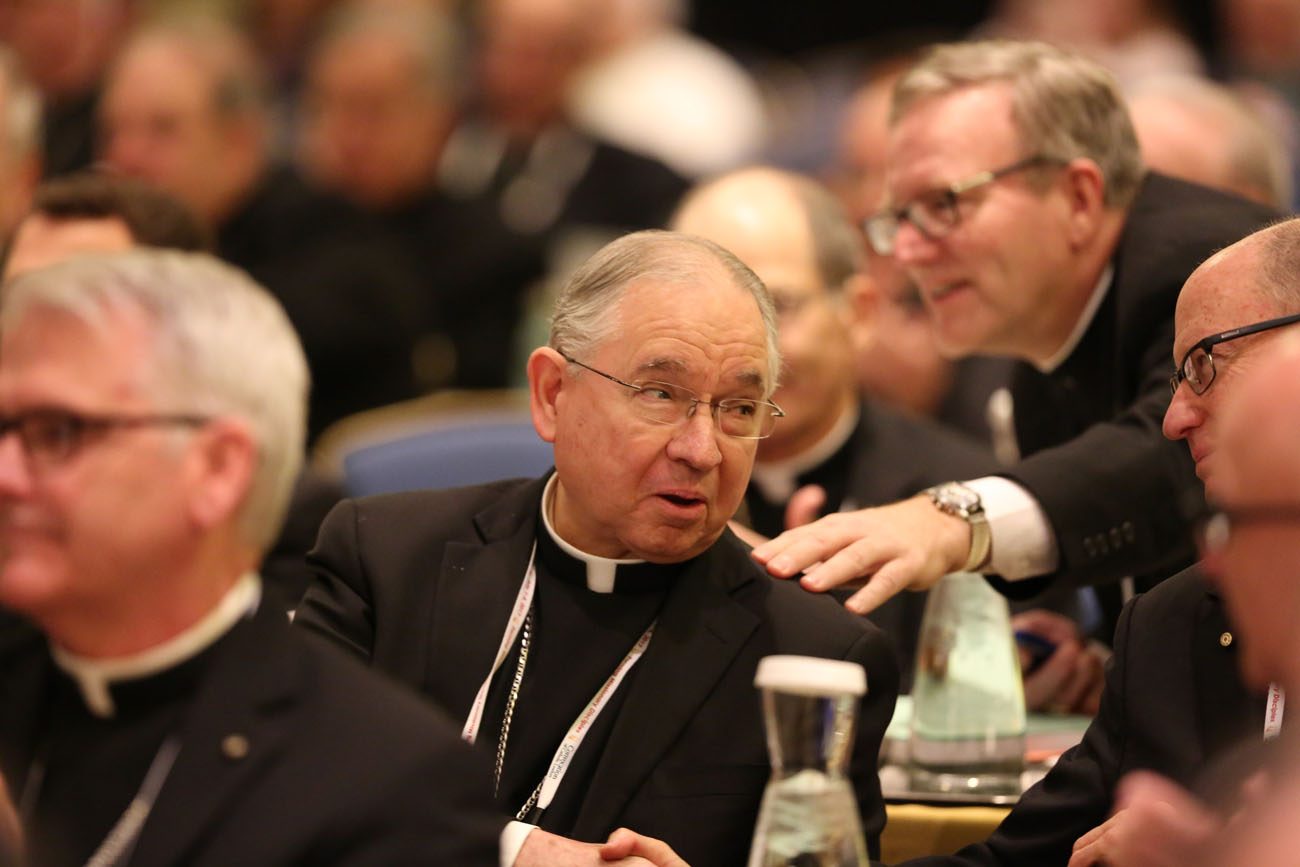 Bishops congratulate Archbishop Jose H. Gomez of Los Angeles after he was elected vice president of the U.S. Conference of Catholic Bishops Nov. 15 during the annual fall general assembly of the USCCB in Baltimore. (CNS photo/Bob Roller)

BALTIMORE (CNS) — Los Angeles Archbishop Jose H. Gomez said his election as vice president of the U.S. Conference of Catholic Bishops Nov. 15 may have had more to do with his archdiocese than anything else.

“I’m grateful to my brother bishops for electing me,” he said, before adding that he thinks it was “also about the Archdiocese of Los Angeles” — the largest archdiocese in the country with about 5 million Catholics, 70 percent of whom are Latino. He said the archdiocese represents the universal church because every month there are Masses in 42 languages.

“Really, the presence of Catholics from all over the world is there,” he said, adding that the bishops recognize that the archdiocese represents “our church in the United States is becoming more and more diverse.”

They are also recognizing the “reality of the Latino presence” in this country, particularly in the Catholic Church, he said.

The Mexican-born archbishop, who is the first Latino to hold the vice president spot in the USCCB leadership, a position which is usually a steppingstone for USCCB president, said his background “helps everybody to understand how important it is to the church to be open and welcoming to the Latino community in the United States.”

He said he will continue to speak out in defense of immigrants.

At a prayer service in Los Angeles, two days after the presidential election, Archbishop Gomez said: “Tonight we promise our brothers and sisters who are undocumented — we will never leave you alone.” He also urged those in the congregation at the Cathedral of Our Lady of the Angels to “reach out to those who are hurting. Now is the time to build unity and heal communities, through our love for our neighbor and our care for those in need.”

He echoed this sentiment in a Catholic News Service interview Nov. 15 at the conclusion of the public session of the bishops’ meeting, saying it is important for the church to help everyone in the country understand the value of the human person.

Amid the overall sense of disunity in the nation after the presidential election campaign and vote, he said he has told people the first thing they need to do is pray. “Pray for elected officials, pray for one another and trust in the love of God that everything is going to be OK with trust in the grace of God.”

He also said the church’s message reminds us “of the value of the human person.” With that understanding, he said: “We need to go out of ourselves” and try to get to know other people, something that happens a lot, he said, in parishes where there are different ethnic communities.

“There is a sense of ‘who are these people?’ but then, when they get to know each other they love each other,” he added.

“That’s what is important for us at this time. Instead of just being afraid, let’s break the ice in a sense,” he said, stressing that this has been the message of Pope Francis, who frequently talks about the culture of encounter.

“I think that’s what the church is called to do at this time in the United States” he said, adding that this outreach should also extend beyond our borders “to go out all over the world to support our brothers and sisters.”

NEXT: At teach-in, social justice advocates challenged to put mercy in action