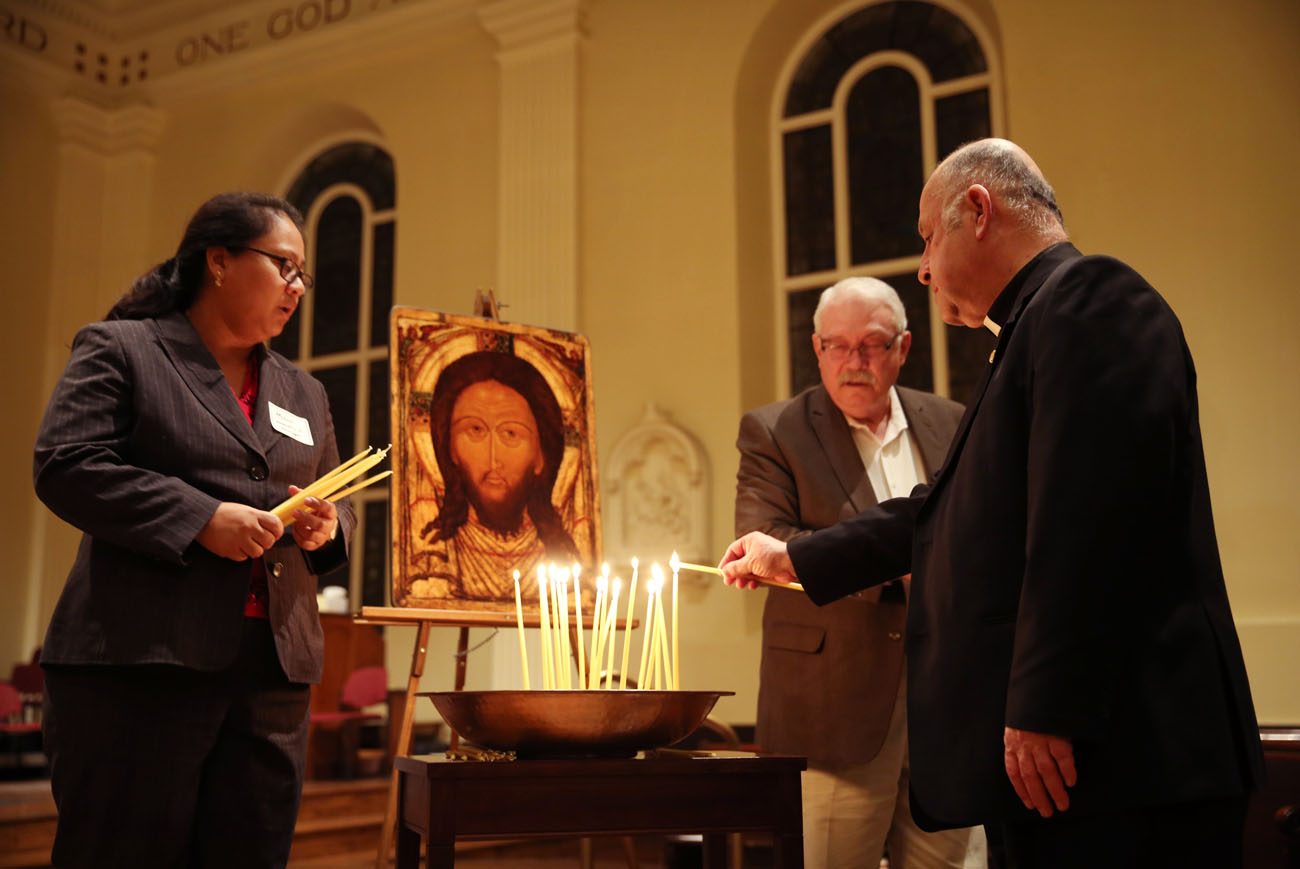 Bishop Yousif B. Habash of Our Lady of Deliverance Syriac Catholic Diocese lights a candle during a prayer service for peace in the world Nov. 15 at St. Vincent de Paul Church in Baltimore. The service was part of an evening program sponsored by several Catholic organizations that coincided with the fall general assembly of the U.S. Conference of Catholic Bishops so that the bishops could attend. (CNS photo/Dennis Sadowski)

BALTIMORE (CNS) — The small group of folks gathered outside St. Vincent de Paul Church were preparing for another night on the streets.

Someone was already hunkered down under a pile of blankets next to the steps leading to the church’s main entrance, their few possessions at arm’s length.

Others who were milling about in front of the church, tucked into a corner of downtown not far from the bars, restaurants and activities that mark the city’s nightlife. In an adjacent parking lot, one man, who said he was homeless, greeted visitors and then asked for a few dollars to get through the night.

The visitors to the church Nov. 15 were encountering real life steps from where they were about to participate in the fourth annual Peace Dinner, which coincides with the annual fall assembly of the U.S. Conference of Catholic Bishops. The church is blocks away from where the bishops met at the Baltimore Marriott Waterfront Hotel.

Bishop John M. Botean of the Romanian Eparchy of St. George in Canton, Ohio, is one of the dinner’s biggest supporters. He said invitations were sent to each bishop. This year about a half-dozen showed up, down a few from last year.

“Some said they were coming and then had other meetings that got scheduled,” said Bishop Botean, an active proponent of peace and nonviolence. “That’s understandable.”

Nonetheless, he was pleased with the overall turnout of about 70 people, a bit higher than in the past.

“We want to start a dialogue and a chance to talk with people about ending war and practicing nonviolence,” Bishop Botean told Catholic News Service. “It comes from Pope Francis’ call for encounter and dialogue.”

Sponsored by the Catholic Peace Fellowship, Pax Christi Metro DC/Baltimore, the Community of Sant’Egidio and the Catholic Worker, the evening included a time of prayer for peace in countries facing war, oppression and other forms of everyday violence.

Andrea Bartoli, a Sant’Egidio member and dean of the School of Diplomacy and International Relations at Seton Hall University in New Jersey, read the story of Cain and Abel from the Book of Genesis.

Afterward in a short reflection, Bartoli said Cain, who killed his brother, was not born a killer but was born out of love from God, and that later he made a choice he regretted.

“We always have a choice. Everyone has a choice,” Bartoli said. “We can listen to God speak to us or make the choice of Cain taking justice in our own hands.”

A litany of nations confronting violence was read with people coming up from their seats to place a lit candle in a type of cauldron full of sand. Named were Burundi, Central America, Libya, Mexico, Nigeria, Pakistan, Philippines, Ukraine and the United States. By the time all of the countries were called and prayed for, about three dozen candles were lit.

Bishop Yousif B. Habash of Our Lady of Deliverance Syriac Catholic Diocese of the U.S. and Canada, which is based in Newark, New Jersey, was one of the bishops who attended. When his homeland of Iraq was called in the litany of nations, he walked up and placed a lit candle in the cauldron.

He said he responded to the invitation because of his interest in Sant’Egidio and the possibility that it could serve Syriac Catholics in the U.S. and elsewhere.

“This is a chance to get to know the community,” he said.

The evening included a light dinner, in the Catholic Worker tradition, and a presentation and discussion about how church communities could create space for encountering, listening and accompanying military veterans returning from war and their families.

Warren Kinghorn, assistant professor of psychiatry and pastoral and moral theology at Duke University, reviewed some of the deepest challenges vets face upon their return to civilian life after the stresses of bombings, shootings and even killings.

Veterans, who often feel they are not understood because of their experiences, are in need of the healing value of connecting with the humanity of others, he explained.

“How can we, in parishes, schools, organizations, places of work, help veterans feel comfortable with being themselves?” asked Kinghorn, whose work centers on the role of religious communities caring for people with mental health challenges. “How does the church respond by calling veterans into the service of the church?”

The questions were meant to begin a conversation. The individual answers rested with the participants.

PREVIOUS: Vatican official tells bishops to be ‘witnesses to the Risen One’