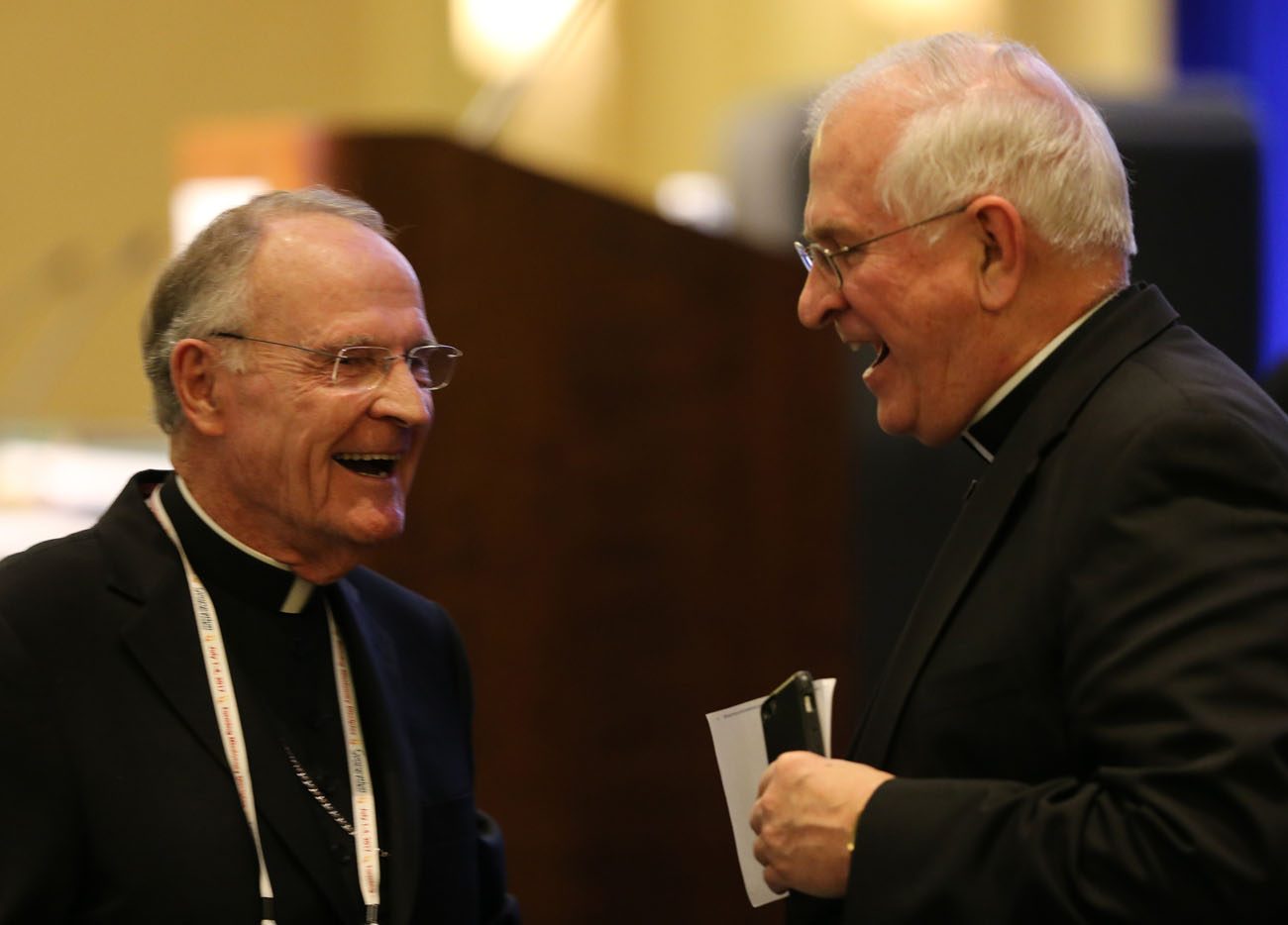 BALTIMORE (CNS) — In small and often intimate gestures, there are big lessons for bishops to learn as they exercise their ministry, said Archbishop Joseph E. Kurtz of Louisville, Kentucky, in his final address as president of the U.S. bishops’ conference.

“No words of Jesus are more concrete in capturing God’s mercy at work in our bishops’ conference than his call in Matthew 25: ‘What you did for one of my least, you did for me,'” he said in his remarks Nov. 14 in Baltimore at the U.S. bishops’ annual fall general assembly.

Archbishop Kurtz noted different encounters he had during his three-year tenure as president, each with a lesson learned.

In one instance, a Filipina woman in Tacloban, Philippines, after the devastation wrought by Typhoon Yolanda, explained what her neighbors and the whole community now faced with “no hint in her voice of seeking her own good,” he said. Instead “she was seeking the common good.”

“Bishops are called always to seek the common good — an environment in which all might thrive with dignity. For 99 years, we bishops have addressed vital issues on a national level — seeking that common good and mindful of those without a voice,” he said.

His mention of “99 years” refers to the fact that what is today called the U.S. Conference of Catholic Bishops will mark the 100th anniversary in 2017 of its formal establishment.

In another of the archbishop’s encounters, an 8-year-old boy with Down syndrome in Kharkiv, Ukraine, who, after Archbishop Kurtz extended his hand, “instinctively jumped into my arms, gave me a big smile and said in a language that my heart understood: ‘I love you.'” The archbishop was part of delegation that visited the war-torn country in June 2015.

The boy was “a trusting child of God deserving a chance,” he said, like so many youths in the U.S. who need ” a chance, an opportunity.” One aim of the recently established USCCB Task Force to Promote Peace in Our Communities, he noted, is to help bring about such opportunity by building trust in neighborhoods and promoting civility.

He also recalled meeting two dozen unaccompanied immigrant minors in federal custody whose dreams “would have made me proud coming from a Catholic high school senior. Here’s what they wanted: only to work, study and join their family,” and “to pray to God for help.”

Meeting these youngsters, he said, put a face on the complexities of their situation and that of refugees, too. “Our nation is on thin ice” when such individuals are discussed “in the abstract,” he added.

“Whether the young child with Down syndrome from Kharkiv in my arms or the dozens of youth with dreams in their hearts, we bishops need those flashes of inspiration and encouragement to come to us from God,” Archbishop Kurtz said.

“We bishops and all who serve the Lord need also to open our hearts to the joy that others will give to us. Joy and love are not only to be given but also to be received,” he added.

Another lesson Archbishop Kurtz said he learned came from visiting a home for the aged run by the Little Sisters of the Poor in his archdiocese. The order, along with several other Catholic entities, has been in a long-running court battle with the federal government over employer requirements to provide contraceptive coverage to their employees under the Affordable Care Act — coverage the Little Sisters oppose on moral grounds.

“The lesson learned: Don’t allow government to define what integrity of faith means. It’s our duty to protect those who wish simply to live their faith and to serve God and one another with integrity of faith,” he said.

A last lesson came from a voice message of support left by retired Bishop David B. Thompson of Charleston, South Carolina, shortly after Archbishop Kurtz’s election as president of the bishops’ conference three years ago. Within a week, Bishop Thompson. 90, had died.

Bishop Thompson had been “a son of encouragement, a ‘Barnabas,'” Archbishop Kurtz said. “We bishops need a Barnabas in our lives, and we need to be Barnabas to one another.

He added, “The quality of your service will be free of burnout and full of enthusiasm to the degree that we live as church, as ‘communio,’ with one another.”

Archbishop Kurtz outlined several challenges ahead including for the global church, as people continue to be persecuted for their religion, and for the U.S. church, as it continues to “tirelessly promote” human dignity and as it faces “challenges to truth and charity within.” He urged all to move beyond the lack of civility and rancor that marked this year’s presidential election and to work with elected officials, including the new Trump administration, for the common good.

The bishops’ meeting is “not simply a gathering — we are a family, a ‘communio’ of pastors. Just as a family seeks to serve each other as a prerequisite for authentic service beyond that faith, so we do, too,” Archbishop Kurtz told his brother bishops. “If not, our pastoral hearts will be shallow and short-lived with others. In the midst of the busy schedules that you bishops find as your daily routine, thank God for those moments of lifting up one another.”

PREVIOUS: Panel: The ‘forgotten’ propelled Trump to victory, but others are in fear

NEXT: Veterans cook up new careers with help of Catholic Charities cafe