Panel: The ‘forgotten’ propelled Trump to victory, but others are in fear 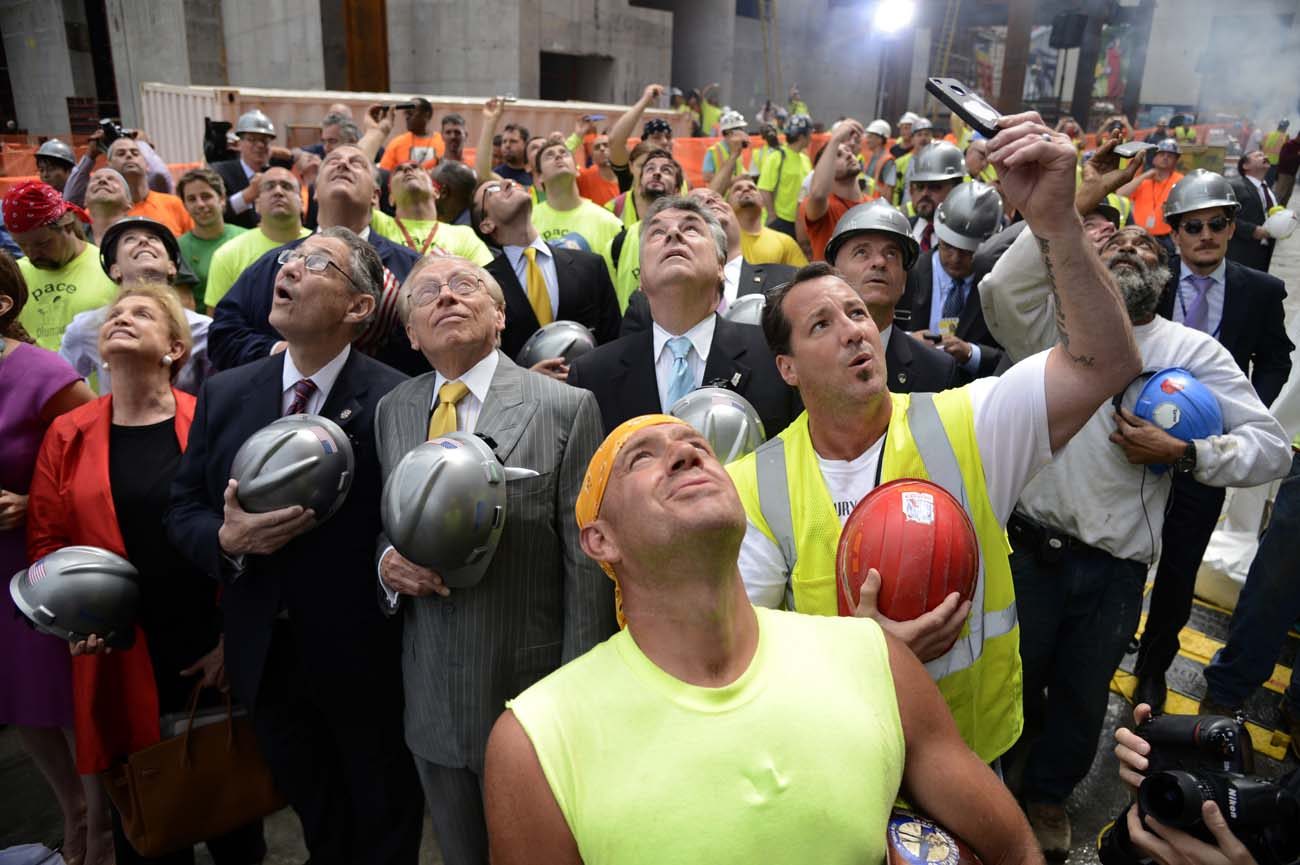 Developers and construction workers watch the final steel beam lifted to the top of 4 World Trade Center in New York City in this 2012 photo. President-elect Donald J. Trump credits blue-collar workers for his unexpected rise to the presidency of the United States. (CNS photo/Andrew Gombert, EPA)

WASHINGTON (CNS) – The day after the victory that shocked the world, Donald J. Trump sent a tweet addressed to those who paved the way to his largely unexpected rise to the presidency of the United States.

“Such a beautiful and important evening!” he said from his @realDonaldTrump Twitter account. “The forgotten man and woman will never be forgotten again.”

Bob Costa, a reporter who covered the Trump campaign for The Washington Post, said that, about a year ago, the candidate had started talking about this “forgotten man,” which included men and women who lived in towns flattened, in various ways, by an industrial economy long gone.

Many were left behind by an economy that no longer depended on their hard labor, which once made the country — and their families and towns — thrive. They were so forgotten by the new, technology-driven economy that even polls ignored them and they remained invisible right up until the evening of the election. They felt economically vulnerable and found themselves threatened and scared by a world that embraced people who didn’t look like them, were not members of their institutions, and didn’t think like them on matters such as religion or marriage.

“They feel unprotected … unprotected by a global economy, they feel like they want to protect something,” said Costa. “They feel there’s nothing for them. Their towns are full of carcasses of buildings … molten metal… addiction and limited opportunity.”

Even though Trump’s worldliness and life of luxury didn’t reflect theirs, he listened to them, spoke to them, embraced them, embraced their discontent, said Costa during a Nov. 10 panel at Georgetown University attempting to explain the surprising victory.

Through the disaffected, Trump found a voice, said Costa, and he became the vessel through which white voters from rural areas in places such as Wisconsin, Michigan and Pennsylvania channeled their worldview.

“He seized upon it,” said Costa. “It’s what lifted him to the White House.”

Two things happened, added panelist Michael Gerson, a journalist and former speechwriter for President George W. Bush: Trump won the majority white vote, but also, the Democratic coalition “didn’t show up” for Democratic presidential nominee Hillary Clinton, who had been plagued by recurring questions over her use of a personal computer server during her time as Secretary of State.

But Trump’s strategy, to go after the majority white vote, said Gerson, is a “one-time only thing” because of the declining number of white voters and the rising number of minority voters in the United States. They won’t be around in such numbers in four years, he said. And while Trump was able to comfort the “forgotten man,” he made a wide swath of minority voters and women feel unsafe.

Many have taken to the streets in recent days in major cities such as Chicago, New York, Dallas and Portland, Oregon, to protest the president-elect. They’ve burned his image and gathered outside his various Trump properties armed with their own kind of discontent.

It’s ironic and tragic that a candidate that makes one group of people feel protected, now makes so many other groups of Americans feel so vulnerable, said panelist E.J. Dionne, a journalist for The Washington Post and senior fellow at the Brookings Institution in Washington.

“This election shows this country is as divided as we’ve ever been since 1850s … and you know where that ended up in 1861,” said Dionne, referencing the American Civil War. “We are (divided) along the lines of gender, divided by class, divided deeply by race, divided by immigration status and national origin.”

John Carr, director of the Initiative on Catholic Social Thought and Public Life, which sponsored the event, asked the panelists about the role of leaders, of political parties and churches, given the racial, economic and class divisions the country is experiencing.

Panelist Elizabeth Dias, religion writer for Time magazine, said there’s a big problem because people don’t view other people, who may be different than them or think differently, as human.

Dionne said the vote shows the strong divisions that exist even among groups that share an established institution and values, such as the Catholic Church. National exit polls following the election showed that while Catholics as a group voted 52 to 45 percent in favor of Trump, the differences between the two largest ethnic groups in the church were stark: White Catholics voted 60 to 37 percent for Trump and Latino Catholics voted 67 to 26 percent for Clinton.

“We’re voting with our kind of tribal connections,” Dionne said.

Several panelists indicated that even when Trump insulted the pope, on various occasions, white Catholics still sided with their political candidate instead of their religious leader. On one occasion, recalled Dias, former Trump aide Corey Lewandowski, a Catholic, cautioned the thrice-married, playboy Trump not to go against the pope after the pontiff said that a person “who thinks only about building walls … and not building bridges, is not Christian.”

Trump publicly called the pope “disgraceful,” and according to Time magazine, Trump said to Lewandowski that the pope “just loves Mexico. He’s brainwashed.”

“Many voted for Donald Trump not because of what he believes, but what he represents: disruption,” said Costa. “Disruption is a threat to the state, disruption to a culture that is fast-changing.”

Trump zeroed in on their anxiety about immigration, same-sex marriage, a media and Hollywood culture they see as leaning too far to the political left, he said. They wanted disruption of it all and were willing to forgive any characters faults of Trump in exchange for that disruption. And whatever disruption is coming, it will happen quickly, said Costa.

Though some refer to him as an overgrown child and make fun of him, “this is very much an adult,” Costa said. Though there’s “not so much depth when it comes to the intellectual, he doesn’t read books … but he’s an operator,” he added.

“He doesn’t have guiding beliefs but he surrounds himself with people who detest the state,” he said. “He’s going to try to really push in an aggressive way … he’s going to roll, and roll fast, early next year with legislation.”

The result could be dangerous for public life, said Gerson, and people need to do a lot of soul-searching.

“What I try to remind people … if Christianity is about the defense of your own institutions, your own rights, then there’s something missing here,” he said. “It should be about ‘everyone matters’ and there is no insignificant person.”

This applies to both parties, he said, and urged people to examine their set of beliefs.

“We have seen the biggest change in American politics in this election, that I, as a Republican, find particularly disturbing,” he said. “It is the return of nativism to American public life.”

And it is encouraging fear of the other, he added.

Dionne encouraged others to “make America empathetic again” and said the signs of discontent had been there for a while, and white voters aren’t the only ones who have felt displaced by an economy that has left many behind, it took Trump “to remind us of how much pain there was out in the country. Unfortunately, we had to go through this experience to get there. My hope is that there will be something constructive,” he said.

PREVIOUS: Veterans get hero’s welcome after visit to war memorials in Washington

NEXT: Big lessons to be learned from small actions, departing USCCB head says