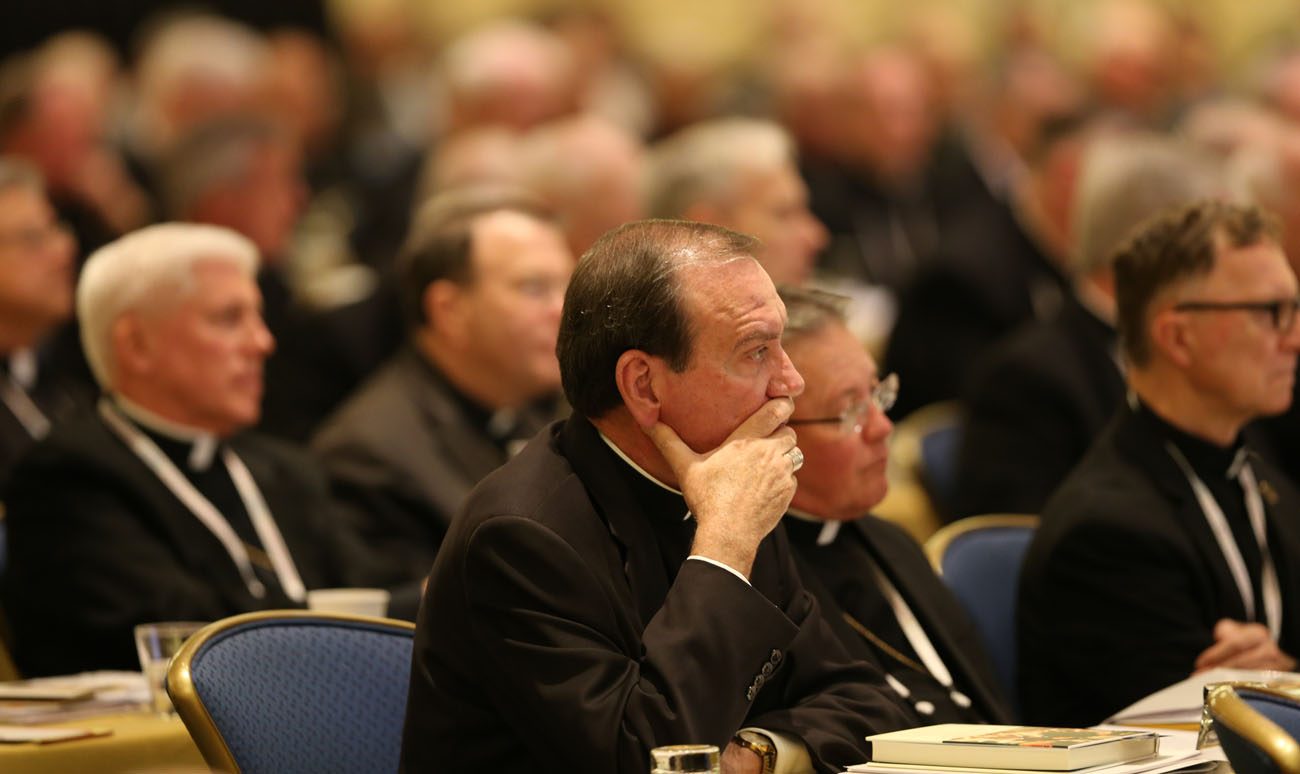 Archbishop Dennis M. Schnurr of Cincinnati, center, listens to a speaker Nov. 14 during the annual fall general assembly of the U.S. Conference of Catholic Bishops in Baltimore. (CNS photo/Bob Roller)

BALTIMORE (CNS) — The U.S. bishops could not muster enough votes to approve a 3 percent increase in the diocesan assessment for 2018, and it will take a mail vote of absent bishops to determine whether a change in the assessment formula will pass.

Needing 130 votes to approve the assessment increase, only 100 bishops, or 60 percent, approved the hike, while 65 voted it down. Another three bishops voted to abstain. The vote was restricted to diocesan and eparchial bishops and their equivalents in law.

A vote to alter the assessment formula to be based solely on collections received 107 “yes” votes to 47 “no” votes. With 31 bishops absent, mail ballots will be sent to them. Twenty-three of those bishops would need to vote “yes” for the change to go into effect.

The votes were taken during the Nov. 15 session of the fall general assembly of the U.S. Conference of Catholic Bishops in Baltimore.

The current assessment is based on a formula that takes into account the registered Catholic households in each diocese, offertory receipts and the amount of contributions to three national collections.

Bishops speaking against the proposed change in the assessment formula cited school tuition and parish stewardship issues. They called those penalties when it came to the assessment proposal.

“I think every bishop empathizes with the ability to give tuition assistance to our schools,” said Archbishop Dennis M. Schnurr of Cincinnati, USCCB treasurer and chairman of its Committee on Budget and Finance Committee, which presented the plan.

“These schools are funded 100 percent by the parish offertories. See what I’m getting at? If we had tuition, a lot of these little places wouldn’t exist, and we would have a much lower assessment. We are really getting hit,” he said. “It’s a small, rural diocese. The future of education there is on the line. It’s all I’ve got to say.”

In response to a query as to why population, or the number of registered Catholic households, was removed from the assessment formula proposal, Archbishop Schnurr said: “Part of the reason population was taken out was that in itself (it) was difficult to account for in some dioceses where, for some reason or another, the undocumented don’t want to come forward and be counted.”

“What your finance officers told us is that they have a strong confidence in the amount of money collected in the parishes,” he said.

“Because of the accounting systems being put in place, they’re more and more comfortable” with the reliability of offertory figures and “because of the professionality of your staffs,” Markey added, “you make it much more simple and equitable.”

A vote to approve the 2017 USCCB budget proved to be not nearly as contentious, with 165 bishops, or 95 percent of those in attendance, voting “yes.”

The bishops also approved a resolution on diocesan financial reporting by a vote of 155 to 8, with one abstention.

PREVIOUS: Guam’s new coadjutor archbishop says his first task will be to listen