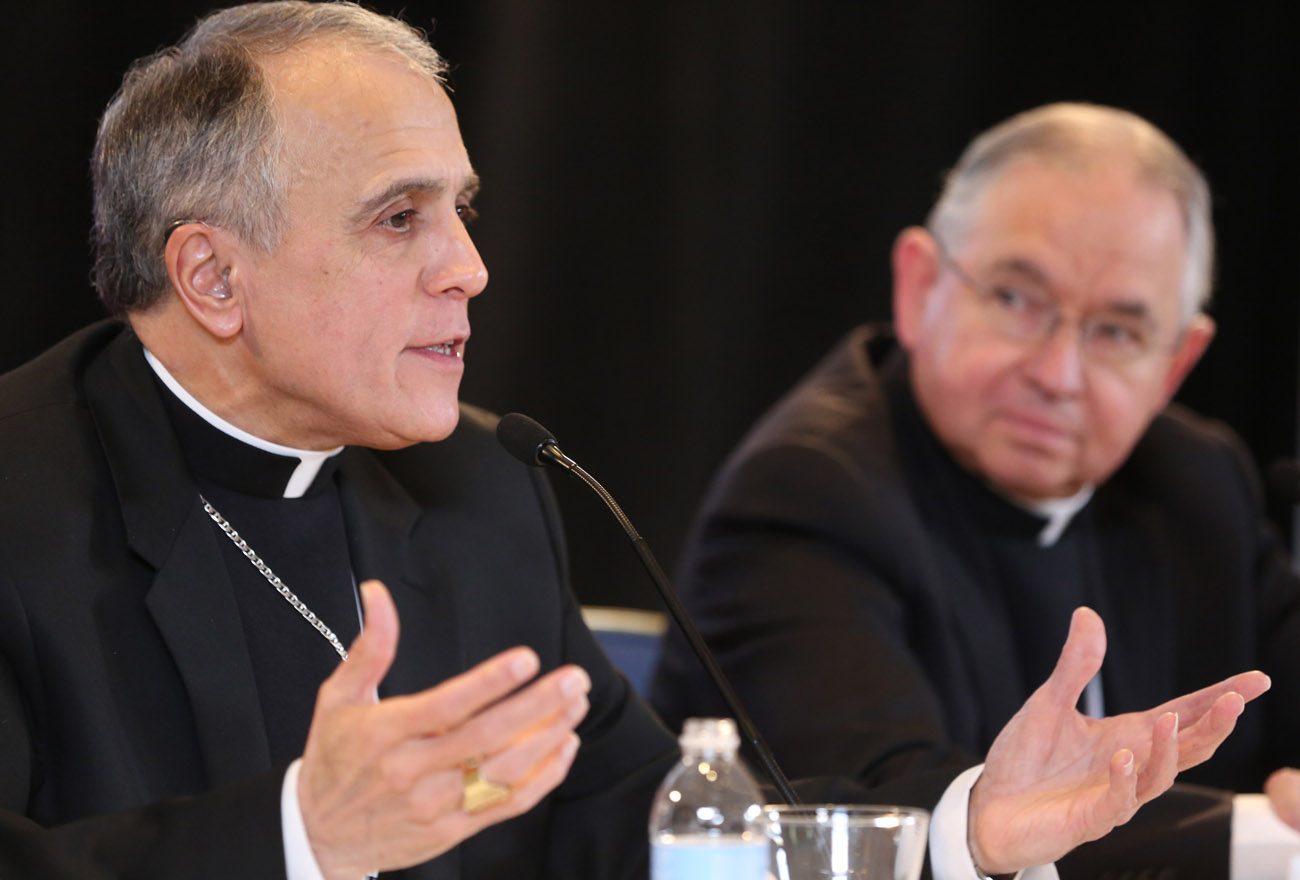 Cardinal Daniel N. DiNardo of Galveston-Houston addresses a news conference Nov. 15 at the fall general assembly of the U.S. Conference of Catholic Bishops in Baltimore. The cardinal was elected USCCB president that morning. Seated to his left is Archbishop Jose H. Gomez of Los Angeles, who was elected USCCB vice president. (CNS photo/Bob Roller)

BALTIMORE (CNS) — The newly elected president of the U.S. Conference of Catholic Bishops said he is not planning on “creating a new vision” but hopes to continue the bishops’ priorities particularly focusing on dialogue and listening to Catholics.

The bishops “intend to be attentive,” said Cardinal Daniel N. DiNardo of Galveston-Houston hours after his Nov. 15 election to a three-year term that begins at the close of the bishops’ fall assembly in Baltimore.

For the past three years, he has served as USCCB vice president, a role that typically leads to election as president. He succeeds Archbishop Joseph E. Kurtz of Louisville, Kentucky.

The cardinal said he plans to focus on the needs and concerns of Catholics, particularly members of the immigrant community who fear deportation with the recent election of Donald Trump as U.S. president. But he also said he remained hopeful about working with the new administration, saying its newness “offers options and possibilities.”

“We hope for a whole lot. This is brand new,” he told Catholic News Service.

The cardinal said he would listen to the voices of the immigrants and would work to ensure government leaders treat them with dignity, adding that the church in the U.S. has always stood with immigrants.

Cardinal DiNardo, 67, said the key part of his role remains as a church leader, which is “where we show our shepherd’s heart.”

His Archdiocese of Galveston-Houston includes 1.3 million Catholics, 440 priests in 146 parishes and 60 schools spread over 8,880 square miles.

The cardinal, who was born in Steubenville, Ohio, was ordained to the priesthood for the Diocese of Pittsburgh in 1977 and named a bishop 20 years later. He is a former bishop of Sioux City, Iowa. He has been archbishop of Galveston-Houston since 2006. He was named a cardinal in 2007 and participated in the 2013 conclave that elected Pope Francis.

This summer, after the shooting of police officers in Dallas in response to shootings by police officers, Cardinal DiNardo said: “These tragedies call for our prayer for healing and for change. It seems as though at times our hearts are stony and paralyzed. We need God’s spirit of mercy to melt them and reopen our hearts to the beauty of human life and to rebuilding human communities.”