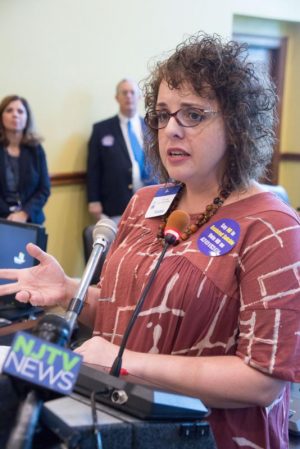 Sarah Steele speaks during a news conference Oct. 20 in the New Jersey State House Annex in Trenton about her battle with terminal brain cancer and the fact that she is alive 10 years after she was only given months to live. (CNS photo/Joe Moore, Catholic Monitor)

TRENTON, N.J. (CNS) — Two years ago, as terminally ill 29-year-old Brittany Maynard made national news by publicly advocating for her right to end her life under Oregon’s Death With Dignity law, Sarah Steele sat in her Camden County home, quietly anguishing over her right to live.

“I felt like it really minimized what I had fought for and conquered in my own life,” said Steele, 44, who 10 years ago was told she had only months to live.

That’s one reason why Steele, a two-time cancer survivor, wife and mother of three, is now working with a broad-based coalition including the New Jersey Catholic Conference, diocesan leaders throughout the state, and several right-to-life and disabilities advocacy groups against legislation in the state Legislature that would legalize assisted suicide.

Known as the “Aid in Dying for the Terminally Ill Act,” the bill would permit terminally ill patients to “self-administer medications to end life in a humane and dignified manner.” The state Assembly passed the measure Oct. 20 in a 41-28 vote, with five abstentions, and it now goes to the state Senate.

A similar measure is currently pending in the D.C. Council, and Colorado voters will decide if assisted suicide should be allowed in their state. Currently, assisted suicide is legal in five states: Vermont, Montana, Oregon, Washington and California.

In New Jersey, Steele told The Monitor, Trenton’s diocesan newspaper: “I want people to hear how important this issue really is.”

She was 23 when she was first diagnosed with cancer — stage 3 lymphoma — and told she would never have children. But after years of treatments, she was considered in remission. She also was the mother of two little girls and a boy.

But it was only four months after her third daughter was born that she began to notice a change in her demeanor. She was depressed and often felt in “a fog.”

“I would sit on the couch and watch TV,” she said, “like a bug to a light. I couldn’t tell you what I was watching — I would just stare at it.”

Her energy level dropped, and she was diagnosed with post-partum depression. Then the headaches began. Eventually, the pressure in Steele’s brain became so intense, she ended up in the emergency room, an experience she talks about with disdain.

“They thought I was medicine-seeking because I just presented with a headache,” she said, adding that she was in the emergency room for hours before she could convince a doctor to perform tests. “I remember pleading with the doctor, ‘I want someone to look at my brain.'”

What was discovered, Steele remembers, sent her doctor back into her hospital room, his face drained of color — a brain tumor. “It was surreal,” she said. “It’s like when you hear that someone you know is going to pass away. You know, but you’re still not prepared for it. I was in shock.”

She was rushed to Thomas Jefferson University Hospital in Philadelphia, and as she and her family awaited the results of a biopsy, she remembers feeling relieved, not from the news, but to finally have a concrete diagnosis.

“We were celebrating that I had an answer … we were almost giddy,” she said.

A euphoria that was short-lived as the diagnosis returned — anaplastic astrocytoma, a rare, aggressive stage 3 brain cancer. She underwent two surgeries soon after, but was told she would not see Christmas, which was only four months away.

Those months of chemotherapy and medications turned into years of treatment -– years that as she fought for life, she saw her children grow into teenagers. Now, 10 years later, she is stable, but the tumor is still present in her brain, and she is considered terminal. But she’s alive.

“I have to take naps; sometimes I can’t remember names,” Steele said. “I basically have a brain injury, and there’s a stigma that goes along with that.”

Through it all, she said she never considered suicide. “I never wanted to end my life. I wanted to fight. What made me feel empowered was to embrace what was in front of me and to be here as long as I could for the people who love me.”

Steele admits to being frustrated at the overwhelming media attention that surrounded the Maynard case. She said that at the time, she, too, attempted to reach out to media outlets and advocate for the right to live. She got nowhere. Meanwhile Maynard, who was also diagnosed with terminal brain cancer, ended her life in November 2014 with the aid of medication.

“What my concern about assisted suicide is, it’s a slippery slope,” she said. “My decision to live doesn’t have an effect on others, unlike Brittany’s decision to die,” she said, expressing concerns over health insurance.

For example, Steele cited the case of a 64-year-old woman in Oregon, who, in 2008, was denied medical insurance coverage to treat her lung cancer. The insurance company, however, did agree to pay for a physician-assisted death.

“The sanctity of life is deteriorating, and Brittany Maynard’s death and Oregon’s decision to support it affect my right to fight my illness,” Steele said. “Nobody should be telling you that you don’t have rights to medication.”

For her, the struggle to protect her right to live is still just as dire as it was 10 years ago when she was first diagnosed. “I was told I wouldn’t see Christmas. But it’s not over. Do you know how many Christmases I’ve seen?” she said.

Steele, who continues to be treated by Dr. Jon Glass, Thomas Jefferson University Hospital, admits there will likely be a time in the future when her tumor will again need treatment.

“There’s a danger for me personally that if this legislation is passed in New Jersey, I won’t be covered under insurance,” she said. “Let me tell you, 44 is still young, and I don’t think insurance companies should decide if I have a quality of life.”

Mauro is associate editor of The Monitor, newspaper of the Diocese of Trenton.