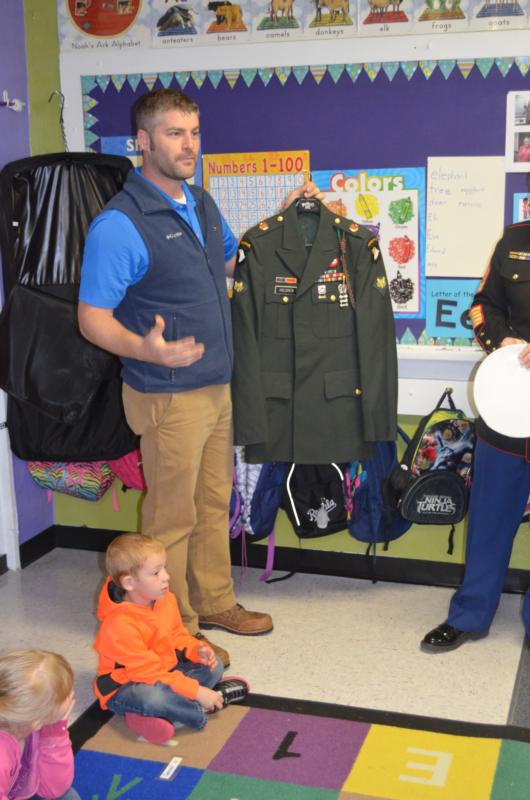 Budke explained how important it was for the kids to see what their parents do and why they should honor them. Fixsen said she thought it was vital for the children to speak with her and others who have served in the military.

“I think it was important for them to see normal people in their uniforms because I don’t think they fully understand that moms and dads are the ones that are in the military and the ones who are serving,” said Fixsen. “It can be hard for the kids to understand that there are also girls who are serving, so I know it was important for Jama to have a female veteran be represented.”

Apart from learning the importance of what freedom is and how it is achieved, Budke and Fixsen both mentioned how crucial it is for children to not only learn about American heroes but also the ones in their everyday lives.

“I think it is important because we have lots of heroes that we see every day but we might not realize it,” said Budke. “Anyone can be a hero, like your mom or your dad. They don’t necessarily have to be a veteran. I want the kids to learn that we should show how thankful we are for the sacrifices they made.”

“At that age, learning that anybody can be in the military was the biggest lesson,” said Fixsen. “I think the general concept was that every day people are the ones who volunteer who fight for the freedoms that we have. We want them to know that kids in other countries may not be going to school like they are and that they have more privileges than others.”

Budke hopes the event held earlier this fall will take place again; it was a first. She’d like to see it take place annually and involve more people from the community and “branch out to other classes and older grades.”

Doebele writes for The Register, newspaper of the Diocese of Salina.

PREVIOUS: Unlike World Series, prelates’ bet has winners in both cities

NEXT: Before being called to serve church, Kansas clergy served in armed forces