Before being called to serve church, Kansas clergy served in armed forces 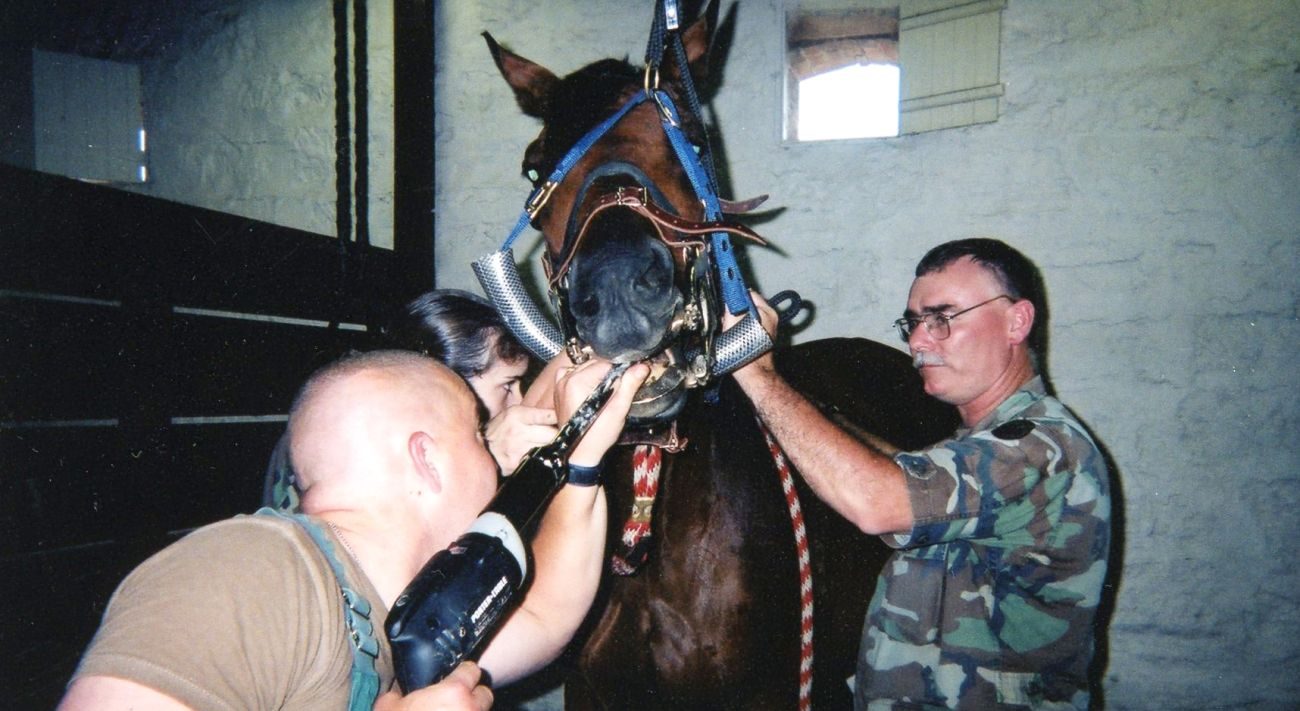 Father Richard Daise, right, is pictured in an undated photo working with one of the horses at Fort Riley, Kan. Father Daise, pastor of Sacred Heart Church in Colby, Kan., is a trained veterinarian who spent nearly 28 years in the U.S. Army caring for animals used in the military, before he discerned a call to the priesthood. (CNS photo/courtesy The Register)

SALINA, Kan. (CNS) — Service is important to those in the U.S. military. As Veterans Day Nov. 11 neared, The Register, newspaper of the Diocese of Salina, talked with some clergy members who were in the armed forces before turning to serve the church.

Here are their stories:

Father Richard Daise, who is pastor of Sacred Heart Church in Colby, said the U.S. Army might sound like an odd career choice for a veterinarian, but he spent nearly 28 years serving the country as a veterinarian.

“Essentially I was drafted and forgot to get out,” he quipped.

When his number was selected during his second year of college, Father Daise signed up with the Reserve Officers’ Training Corps at Kansas State University in Manhattan. Joining the ROTC allowed him to complete his degree in veterinary science.

“By that time, the U.S. involvement in the Vietnam conflict was over, I still had a two-year obligation to serve,” he said. “The game plan was to serve my two years as an Army veterinarian and then get out and open a rural veterinary practice in western Kansas or eastern Colorado.”

But his two years were spent in Korea, which was such a positive experience that he extended his commitment.

“Each time I thought about getting out of the service, they offered me either a great assignment or more education,” Father Daise said. “I jumped at the chance every time.”

His military career took him to Texas, Minnesota, Hawaii and Alaska in the United States, as well as other international locations that included Korea, the Netherlands, Israel, Egypt, Germany and Panama.

“I have received advance degrees and traveled to much of the world while experiencing almost all aspects of the veterinary profession while serving our country in the U.S. Army. I have been truly blessed,” Father Daise said.

A frequent question he receives relates to his job as a veterinarian in the Army.

“There are no longer horses in the cavalry,” he explained, but it does have working dogs, as well as 2,000 horses and mules, and lab animals in research and development facilities. Father Daise also pointed out the Navy has marine mammals — for example, dolphins who retrieve test missiles fired over the open ocean.

In addition to caring for the animals, Father Daise said he worked on food safety.

“There wasn’t a FDA or USDA guaranteeing food for the entire military,” he said. “Our food inspectors and animal techs were responsible for a safe food supply for the troops.”

He also worked in preventative medicine.

“We would go into a region and see what diseases were there,” Father Daise said. “If we had to send the Marines in, we would give them the appropriate vaccinations before they went in.”

He entered the seminary after retiring from the military at age 55.

“I believe I was called to be a veterinarian, and that slowly evolved into the call to the priesthood,” Father Daise said. “I would have been a lousy priest when I graduated from school at 24 years old. I needed that time to discern.”

Educating the youth about military service is something that is important to the priest.

“Many of our young people growing up in our diocese have had no experience of having a veteran in their family or even knowing a veteran,” Father Daise said. “They know you’re supposed to be grateful for their service and protecting us, but it’s not like having someone in their family who is a veteran.”

He planned to take a group of fifth- and sixth-grade students from Sacred Heart Grade School in Colby and St. Mary Grade School in Ellis on a field trip to visit the home of Father Emil Kapaun in Pilsen Nov. 9.

The Kansas-born priest was an Army chaplain who died serving prisoners of war during the Korean War and who is a candidate for sainthood. In April 2013, he was honored posthumously with the Medal of Honor, the highest military honor, in a White House ceremony.

“He is a veteran and a hero that all Kansas Catholics should know,” Father Daise said. “I believe Father Kapaun is the reason I am a parish priest today.”

Military service was always a way of life for Deacon Leo Blasi. His father, Frank, served in the Army during Korea. Deacon Blasi had seven uncles and one aunt who served in both the Army and Navy.

“I wanted to be a pilot,” Deacon Blasi said. “I knew (joining the Army) was the only way I could afford it. There was patriotism before there was interest in aircraft, but flying was the final thing that pulled me in.”

A retired Army veteran, he served in the U.S. Army from 1985 to 2014 — 11 years active duty and the remaining 18 in the Army National Guard. His active duty assignment was first as a Black Hawk helicopter pilot and later as a maintenance test pilot.

Deacon Blasi served in Bosnia from 2002 to 2003 and Iraq from 2009 to 2010. The rest of his military career included living in Panama and all over Europe.

The assistance wasn’t all international, though. Deacon Blasi said his service in the National Guard took him to fight fires in California in 2005, assist in the aftermath of Hurricane Katrina in Louisiana in 2005 and carried hay bales to stranded cattle in western Kansas in 2007.

“It always feels good to help others,” Deacon Blasi said. “To do it when they are in desperate need, when there is nowhere else to turn, when nobody else can do it, that makes it more special.”

Deacon Blasi said taking a day to remember and honor veterans is important.

“When a person signs the dotted line to join a service, it is a blank check to the public for the value up to and often including their own life,” he said. “That is an important thing to remember. That is what Veterans Day is about.”

Deacon Blasi is a transitional deacon for the Diocese of Salina. He anticipates being ordained a priest in 2017.

Among some of the last drafted to serve in Korea, Father Norbert Dlabal served two years for the U.S. Army infantry while he was taking a break from his seminary studies.

“I knew getting drafted was inevitable because I was at the upper edge of the age bracket,” said the priest, who is pastor of Our Lady of Perpetual Help Parish in Goodland. “It didn’t bother me; I accepted it.”

The draft led to his basic training at Fort Riley followed by a stretch in South Korea in the early ’60s.

Although he was taking a break from formal seminary studies, his unit was in need of someone to help minister to the troops, so he offered.

“I assisted the chaplain in providing religious services and other needs to the personnel,” he said.

His assignment was with occupation forces south of the Demilitarized Zone.

“I was still pretty young and needed to grow,” Father Dlabal said. “It certainly introduced me to another part of the world.

“It was a good growing and learning experience. You learn discipline and to sacrifice your own desires, preference and plans for those around you.”

Once his service was complete in 1962, Father Dlabal said he took a little more time before returning to the seminary and completing his theological degree. He was ordained a priest in 1972.

Celebrating and honoring Veterans Day is essential, he said.

“It gives people the chance to reflect on important matters — matters of justice and peace and the horrible reality of war,” Father Dlabal said.

NEXT: Original hymn composed for dedication of new Raleigh cathedral next July