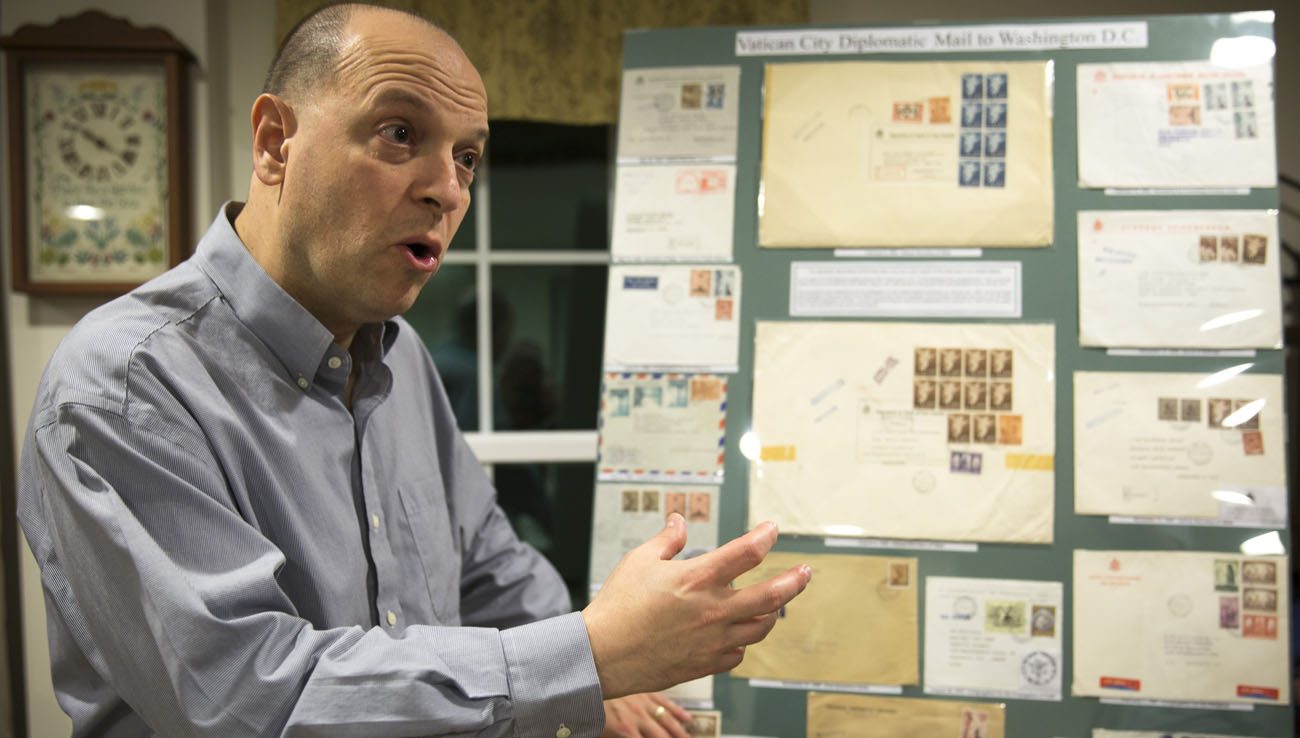 Greg Pirozzi, president of the Vatican Philatelic Society, points out a board displaying some of his Vatican stamps, notes, covers and reference material at his Hanover, Md., home Nov. 1. (CNS photo/Chaz Muth)

HANOVER, Md. (CNS) — The 25-word message from an Italian prisoner of war to his wife at home in Italy is basic and mundane, almost simplistic. It had to be to get through the censors scanning World War II-era mail.

“Dearest wife,” the handwritten correspondence opens, “with this message I inform you of my good health as I hope that you, the children, my brother Salvatore are as well.”

The December 1942 note from Santo Fassano, who was being held in an internee camp in Missoula, Montana, to his wife, Carmela, took nine months to arrive in the small town of Faro Superiore on the northeast tip of Sicily.

Had it not been for the Holy See Secretary of State’s Information Office, there may not have been any correspondence between Fassano and his family at all.

When Greg Pirozzi of Hanover, Maryland, acquired the brief correspondence written on a Vatican form 25 years ago, it set him on a philatelic journey that continues to this day.

Pirozzi, president of the Vatican Philatelic Society, has since studied the behind-the-scenes work carried out in part through the mails by Vatican diplomats to help families track down the whereabouts of their military sons during years of war and world upheaval.

“You’re holding in your hand a personal piece of information,” said Pirozzi, 53, who leads the worldwide group of about 300 who collect and study the postage stamps and postal history of the Vatican City State and its predecessor, the Papal States.

Pirozzi especially prizes the Fassano document because it reveals a little about the story of one family. He has collected others as well. 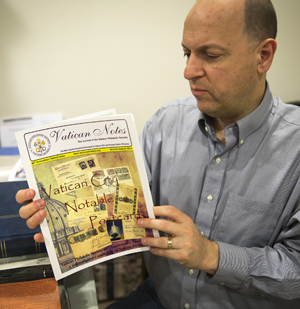 Greg Pirozzi, president of the Vatican Philatelic Society, pages through an issue of the organization’s quarterly journal pertaining to some of his Vatican stamps at his Hanover, Md., home Nov. 1. (CNS photo/Chaz Muth)

“It is a communication from a loved one, individuals who haven’t seen each other or heard from each other for months and months, oftentimes expressing joy in messages of 25 words or less,” Pirozzi told Catholic News Service. “You can imagine what that must be like for either a mother or a son receiving a communication after months of hearing nothing and finally experiencing the joy of having a message of wellness. It’s not only the historical aspect (that is interesting), but it’s the personal aspect that draws you into the stories.”

What attracts Pirozzi is the fact that such correspondence often traveled through regular mail. The Fassano note, for instance, was carried in an envelope franked with a common Vatican postage stamp issued to raise money for war refugees. It shows numerous refugees in front of the face of Jesus.

Pirozzi’s specialty in collecting Vatican stamps and postal history is a natural outcome of a hobby that he has enjoyed since he was a 7-year-old growing up in Brooklyn, New York, after he responded to a matchbook cover ad offering 210 worldwide stamps for 10 cents. When the order arrived, he was hooked; he could explore the history and art of faraway nations from home.

Like most in the hobby, Pirozzi stepped away from collecting to go to college and establish a career. When he discovered another piece of World War II-era correspondence in 1991, he turned back to his childhood hobby and turned it into a passion. Since then he has hunted for similar notes, looking for insights into the work of the Vatican communication service. The opening of the Vatican Archives to researchers and historians — including postal historians such as Pirozzi — has led this longtime philatelist to uncover the Vatican’s diplomatic efforts to match families with internees worldwide.

Pirozzi is not alone in his love of Vatican philately. The Vatican Philatelic Society’s members specialize in other areas such as air mail, postcards, pictorial postmarks and topics such as papal trips. The society hosts an annual meeting, usually in the Washington-Baltimore region at national-level stamp shows and publishes a quarterly journal, “Vatican Notes,” that explores aspects of Vatican philately.

Vatican City started issuing stamps in 1929, when the 110-acre walled enclave within the city of Rome was established under the Lateran Treaty between the Holy See and Italy. From 756 to 1870, the location was part of the Papal States, which had encompassed much of central Italy. Papal States mail is highly coveted by members. 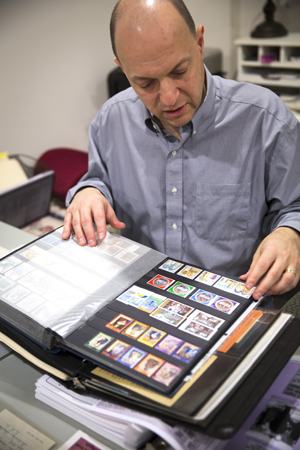 Greg Pirozzi, president of the Vatican Philatelic Society, sorts through some of his Vatican stamps, notes and reference material at his Hanover, Md., home Nov. 1. (CNS photo/Chaz Muth)

Vatican stamps are miniature works of art. Under Pope Francis, the stamps have become ever more bold and innovative in design, incorporating the work of a wider array of artists and reflecting the pope’s desire that the Catholic Church and her members reach to diverse corners of the world, Pirozzi said.

“Most of the designers of Vatican stamps were Italian. Francis has really expanded that,” Pirozzi said. “He has brought in artists from other nations, other cultures. So as a result you’re seeing very different types of designs. It’s an interesting, positive development.”

James C. Hamilton, a society member from Sioux City, Iowa, has collected Vatican stamps and covers, or envelopes that were mailed, for more than 40 years. The retired health care executive has conducted detailed studies of a 1966 set of stamps known as the Works of Man that depict bronze relief images of men in the arts, agriculture and the sciences.

The church’s history and its connection to European history as told through stamps is what interests Hamilton, who is 75. He’s particularly attracted to Vatican stamps depicting art.

“If you look at Vatican stamps issued over the past 80, 90 years, you get an art history education,” he told CNS. “It’s a fascinating topic for me.”

Hamilton said he continues to learn more about church history whenever he looks at a Vatican stamp or cover and they often lead him to research a new topic.

“In reading and researching, you learn stuff you never knew,” he said. “You broaden your education that way. And you make connections among people, places and events.

“It’s a lifelong pursuit if you wanted.”