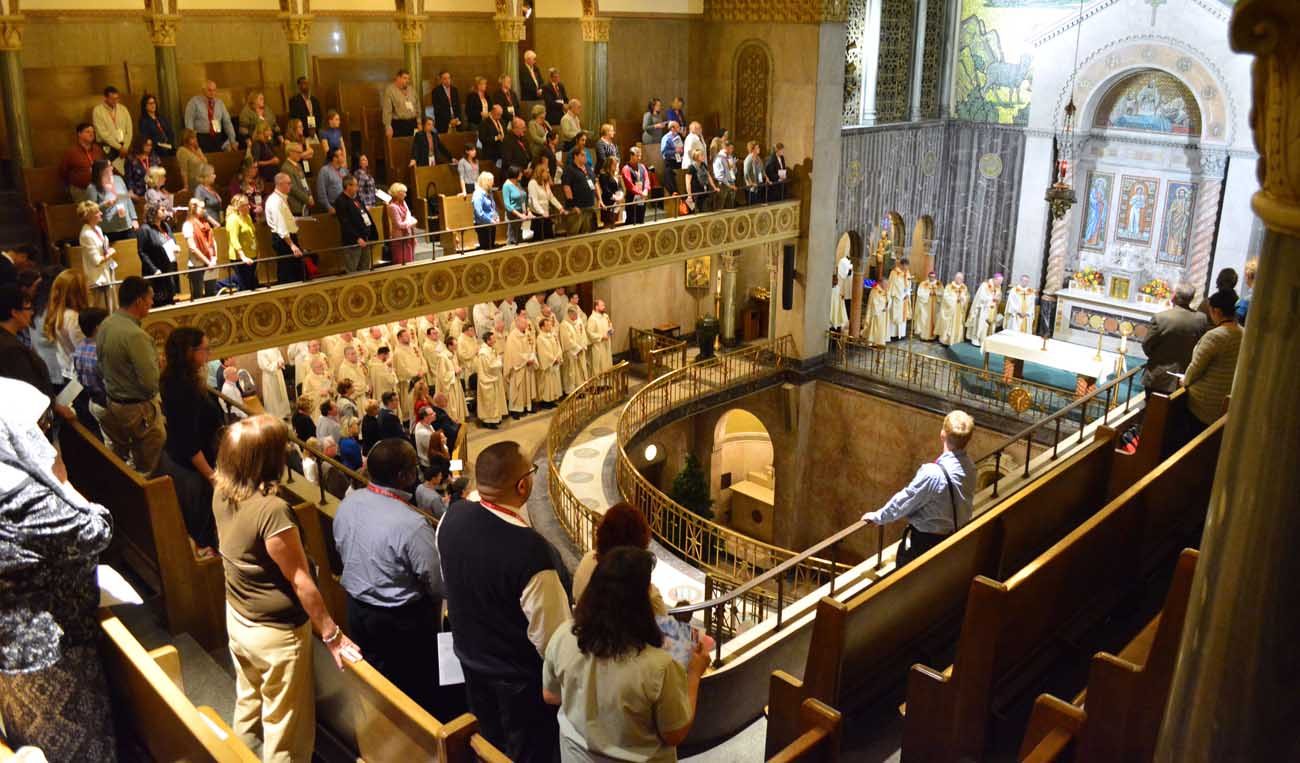 DETROIT (CNS) — It isn’t every day that hundreds of Catholics, led by their archbishop, can be seen marching down the sidewalk of a major American city.

More often, Catholics can be found in their churches, busy with the day-to-day matters of running parishes, keeping the lights on and tending to the important — but routine — work of daily ministry.

And that’s why the gathering on this mild November afternoon was so important.

The Nov. 18 procession in downtown Detroit from the Westin Book Cadillac hotel to St. Aloysius Church was the start of a new day for the Catholic Church in southeast Michigan, a day in which the local church would strive, as Archbishop Allen H. Vigneron had repeatedly said, “to shift from maintenance to mission.”

“The world is waiting for the good news of Jesus Christ,” Archbishop Vigneron proclaimed as he officially opened Synod 16, the 11th general synod of the Archdiocese of Detroit and the first in southeast Michigan in 47 years.

“We made a big deal about this in our planning: we need to be patiently urgent. We need to have the patience that comes from waiting and trusting in God, but we need to be urgent about it,” Archbishop Vigneron said.

The “it” to which the archbishop referred was the work of evangelization, or, as he told the more than 400 synod members, experts, facilitators and observers gathered at the Westin, “what will make the church in southeast Michigan a joyful band of missionary disciples.”

In their first official act, the 358 synod members — including laypeople, priests, religious and bishops from all corners and ministries of the archdiocese — solemnly professed the Nicene Creed and an oath of fidelity during the opening Mass, processing up individually to place their right hand on the book of the Gospels. 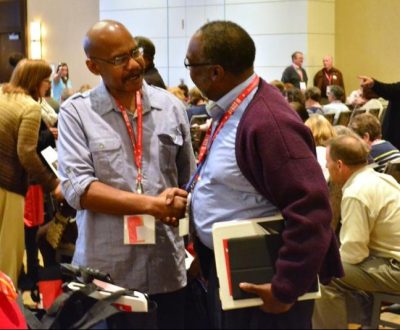 Synod members greet one another Nov. 18 during the opening session of the Detroit Archdiocese’s synod. (CNS photo/Mike Stechschulte, The Michigan Catholic)

The purpose of the synod — to provide advice and counsel to the archbishop about the future direction of the archdiocese — wasn’t lost on Beth Allison, who served as a table facilitator during the synod weekend.

“It’s overwhelming, but in a good way,” said Allison, of St. Paul on the Lake Parish in Grosse Pointe Farms “We’ve been praying a lot, doing holy hours. I’ve been praying for the members at my table and for the Holy Spirit to work through them,” she told The Michigan Catholic, Detroit’s archdiocesan newspaper.

After the Mass and the archbishop’s address, the synod members gathered to begin their task of discussing, debating and deliberating on the synod’s 46 themes over the weekend, broken into four sessions on individuals, families, parishes and Archdiocesan Central Services, which includes administrative offices and ministry offices.

Msgr. Ronald Browne, secretary of the 2016 gathering, said the synod was organized that way to emphasize that evangelization must start with the individual if the church hopes to affect meaningful change in its institutions.

“Part of why we’re gathering is to inspire the individual first to realize that this is something that, as Archbishop Vigneron mentioned was said by Cardinal (John) Newman, is ‘heart to heart.’ That’s how it’s done,” Msgr. Browne said. “It’s not this large program, but we touch each other on an individual level.”

For generations, Msgr. Browne said, the church has acted as a “service provider” rather than a partner to individuals and families in sharing the Gospel of Christ.

“Parents often just have this attitude of ‘Here, take my kids and make them Catholic.’ We need to work together to help parents to be the primary educators of their children,” Msgr. Browne said.

Under the families portion, synod members voted to recommend a proposal to “envision and develop a plan for ongoing human and spiritual formation for all the stages of life.”

Heywan Weldeab, a young adult from St. Elizabeth Parish in Detroit, said the reason for her table’s choice was the need to engage the “forgotten” demographics.

“We talked about 18- to 30-year-olds as unintentionally being an ignored group. After they’re confirmed, no one talks to them until they’re married and have children,” Weldeab said, citing the importance of inviting young adults to actively participate in parish life.

“With that invitation, you feel willing to do more, you feel valued,” Weldeab said. “Young people want to join in more participation in the church; they’re just waiting. You feel like more than just a person who’s not married, not old and not a kid.”

Synod members also recommended establishing “pastoral leadership teams” in every parish to assist pastors in engaging the entire parish in the day-to-day work of “building a culture of encounter” with the risen Christ. 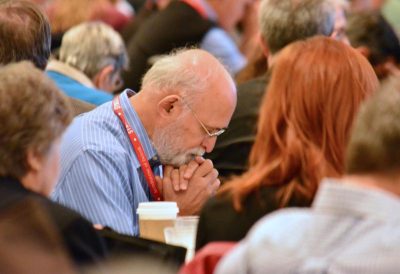 “The parish isn’t just staff, it’s every level from the cleaning person to the pastor, everyone in the office to everyone in the pews,” said Barbara Adragna, a synod member from St. Thecla Parish in Clinton Township. “Everybody who comes to a parish needs something, and we need to listen to the prompting from the Holy Spirit and figure out how best to bring Jesus to them.”

“I think the key for priests is to listen to your parish,” Father Gembala said. “The Holy Spirit works in all of us, and we need to work together.”

On the synod’s final theme, Archdiocesan Central Services, synod members said repairing wounded relationships between parishes and the “downtown headquarters” of the church was important, especially given the tensions of parish mergers and closings and strained finances in recent years.

Archbishop Vigneron, in his introduction to the theme, told synod members he used to get a laugh at parishes when he would introduce himself by saying, “Hello, I’m Archbishop Vigneron. I’m from the archdiocese and I’m here to help.”

“In the upper level organization, people don’t always think of it that way, but I want to begin by assuring you that that is how my co-workers do think,” Archbishop Vigneron said. “The question is, how can we better serve? We really do want to hear that.”

Following the synod, Archbishop Vigneron is expected to meet with expert-advisers — whose task was to record notes about the synod discussions and serve as non-voting participants — before issuing his own account, likely in the form of a pastoral letter, by Pentecost 2017.

Archbishop Michael J. Byrnes, outgoing Detroit auxiliary bishop and newly named coadjutor for Agana, Guam, was a leading voice in organizing Synod 16. He said whatever comes of the archbishop’s discernment, it’s likely to involve a call to a radical recommitment to Christ for every person in the Archdiocese of Detroit.

“The archbishop captured it well when he said this is personal, rather than programmatic. Evangelization is personal because Christianity is personal,” said Archbishop Byrnes, who was to arrive in Guam Nov. 30.

“And that’s something that for decades of living an institutional life, honoring the institution of the Catholic Church — which is an awesome institution — this is making us step back and say, ‘Wait a minute; this is about Jesus.'”

Stechschulte is managing editor of The Michigan Catholic, newspaper of the Archdiocese of Detroit. Staff reporter Dan Meloy contributed to this report.