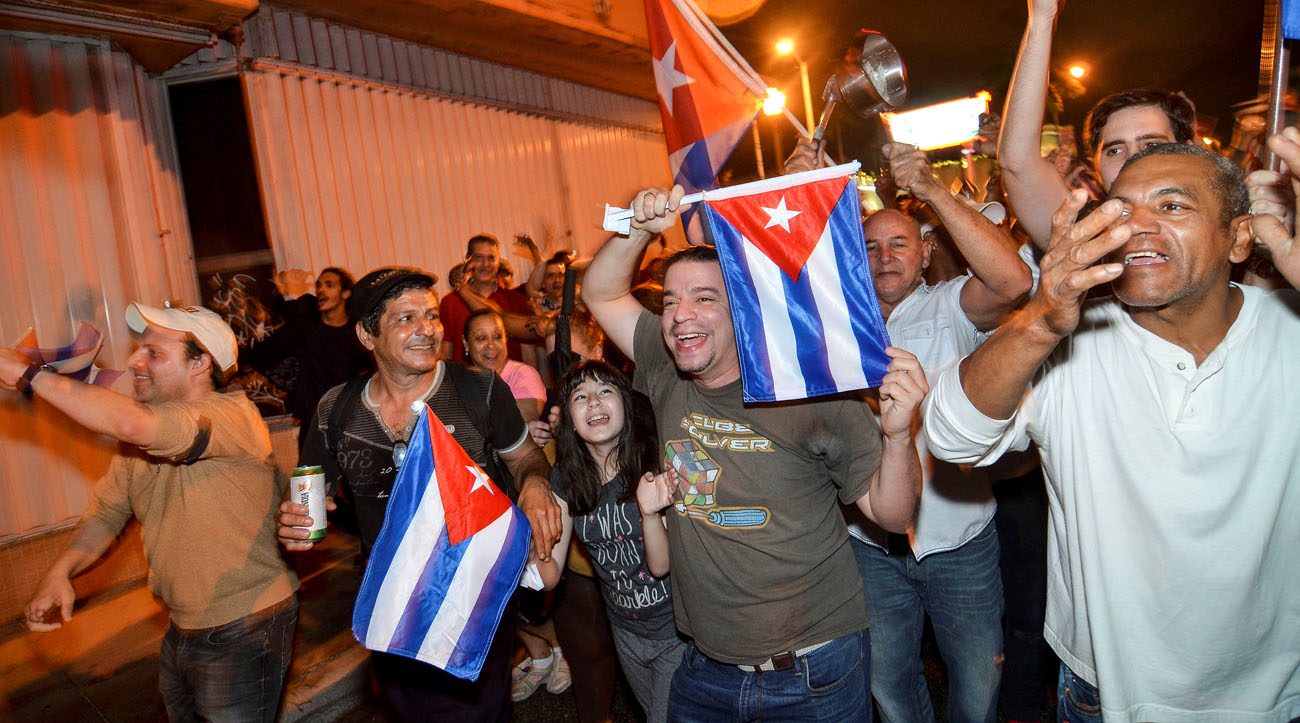 People celebrate the death of Cuban leader Fidel Castro in Little Havana, a neighborhood of Miami, Nov. 26. Castro, who seized power in a 1959 revolution and governed Cuba until 2006, died Nov. 25 at the age of 90. (CNS photo/Gaston De Cardenas, Reuters)

WASHINGTON (CNS) — In a video message, Cuban President Raul Castro announced the Nov. 25 death of his 90-year-old brother and longtime Cuban leader and Communist icon whom many in Latin America know by just one name: Fidel.

“It is with great sorrow that I come before you to inform our people, friends of our America and the world, that today, November 25, 2016, at 10:29 p.m., the commander in chief of the Cuban Revolution Fidel Castro Ruz passed away,” said his brother Raul, who took over control of the island in 2006, after Fidel Castro, became too sick to govern.

Until that year, Fidel Castro had ruled Cuba in some form since 1959, the year he led a revolution that toppled the government of Cuban dictator Fulgencio Batista.

Over the years, he survived attempts to be toppled by others, including the United States. He gained fame throughout Latin America, where many saw him as a David-against-Goliath figure each time he denounced the commercial, “imperialist” interests of the U.S. as attempts to rob the region of its riches.

But for others Castro was a menace and a dictator, particularly those whose properties were seized when his regime nationalized homes and businesses on the island nation without compensation. Over the decades, he was accused of a range of wrongdoings, from unjust imprisonment to executions to religious persecution.

Others lauded him and pointed to Cuba as a model for other Latin American countries to emulate in the areas of education, medicine, and gender and racial equality. Many also blamed the U.S. embargo against Cuba, not Castro’s governance, for the island’s financial woes.

Recognizing the complexity of the different feelings the Cuban leader evoked in life — and now in death — Archbishop Thomas G. Wenski of Miami, where many Cuban exiles live, released a brief statement Nov. 26.

“His death provokes many emotions — both in and outside the island. Nevertheless, beyond all possible emotions, the passing of this figure should lead us to invoke the patroness of Cuba, the Virgin of Charity, asking for peace for Cuba and its people,” Archbishop Wenski said.

He repeated the words later that day during a Mass “for peace in Cuba” at the Ermita de la Caridad in Miami, a shrine devoted to the Virgin of Charity of El Cobre, the patron saint of Cuba, and a place, he said, built by the sacrifices of Cubans in exile.

“On the eve of this first Sunday of Advent … we have learned that Fidel Castro has died,” Archbishop Wenski said during the homily. “Each human being, each one of us, will die and we will all be judged one day. And now it’s his turn.”

U.S. President Barack Obama, whose administration restored diplomatic relations with the island in 2015, expressed “a hand of friendship to the Cuban people” in a statement but also recognized the range of feelings surrounding the leader’s death.

“We know that this moment fills Cubans — in Cuba and in the United States — with powerful emotions, recalling the countless ways in which Fidel Castro altered the course of individual lives, families and of the Cuban nation. History will record and judge the enormous impact of this singular figure on the people and world around him,” he said.

The Catholic bishops of Cuba, in a Nov. 28 statement, expressed condolences to Castro’s family and to government officials and said that as bishops “we entrust Dr. Fidel Castro to Jesus Christ, the face of the Father’s mercy, Lord of life and history. We also ask the Lord Jesus that nothing disturb the coexistence among us Cubans.”

In an interview with Spanish radio COPE, the president of the Cuban bishops’ conference, Archbishop Dionisio Garcia Ibanez of Santiago, said that each time there’s a change of government,  there’s a change for a country, but in this case, there hasn’t been a change in the presidency.

“The figure of Fidel has been so significant, so influential, that it will always have an impact on society,” he said.

In a telegram in Spanish, Pope Francis extended his condolences to Raul Castro on the “sad news” of “the death of your dear brother.” The pope, credited with the rapprochement between the U.S. and Cuba, also expressed condolences to the government and to the Cuban people, and said he was offering prayers.

Though Raul Castro has publicly expressed admiration for Pope Francis, the relationship between the Catholic Church and the Cuban government can be described as a work in progress.

Catholics, like other religious groups in the country, witnessed the seizing of church properties, including schools, churches and other centers used for religious gatherings, following the 1959 revolution. Some locales were closed; others were put to nonreligious uses. Priests and religious suspected of being against the revolution were jailed or expelled and practice of the Catholic faith dwindled on the island, particularly when the nation, under Soviet influence, was for a period an officially atheist country.

In 1998, then Pope John Paul II paid a visit to the island that many credit with loosening religious limitations in Cuba. Since then, each pope who has visited the island also met with Fidel Castro, even after he ceded power.

Fidel Castro was last seen in public Nov. 16 when he met with the president of Vietnam. In the video announcing his death, his brother said Fidel Castro’s body was to be cremated, as he had wished.

Granma, the official newspaper of Cuba’s Communist party, announced nine days of national mourning from Nov. 26 until Dec. 4. His ashes, the newspaper said in an online article, will travel through some parts of Cuba, and mourners are expected to pay their respects during rallies that have been organized in his honor. His ashes will ultimately be interred at St. Ifigenia Cemetery in Santiago de Cuba, where Cuban national leader and Latin American icon Jose Marti is buried.