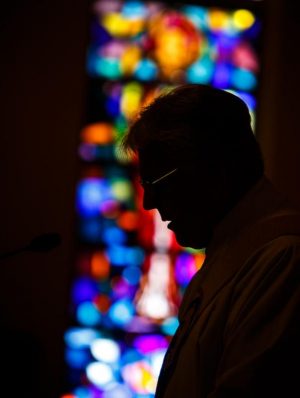 “We should all be prayerful and hopeful for his stability and wisdom in his new job,” added the Nebraska Republican, who did not support Trump’s run.

Sasse was a speaker at a Nov. 15 symposium marking the first six years of the university’s Religious Freedom Project. His Trump remarks came during a question-and-answer session.

Regarding international religious liberty, Sasse said, the United States is not nearly the “clarion voice” it has been in the past “and needs to become in the future.”

He didn’t get more specific than that, although in September, in remarks on the Senate floor, he criticized the U.S. Commission on Civil Rights’ 306-page report, “Peaceful Coexistence: Reconciling Nondiscrimination Principles With Civil Liberties.” In it Martin Castro, the commission’s chairman, said the phrases “religious liberty” and “religious freedom” were “code words” used to discriminate.

An Oct. 7 letter signed by 17 religious leaders called on President Barack Obama and Congress to disavow the report. “There should be no place in our government for such a low view of our First Freedom — the first of our civil rights — least of all from a body dedicated to protecting them all,” it said.

In the report Castro said: “The phrases ‘religious liberty’ and ‘religious freedom’ will stand for nothing except hypocrisy so long as they remain code words for discrimination, intolerance, racism, sexism, homophobia, Islamophobia, Christian supremacy or any form of intolerance.”

“That,” Sasse said at Georgetown, “just doesn’t have any understanding of where we come from, politically.”

He said religious liberty “should not be a placeholder for some sort of bigotry. … This is a community that believes we defend people even when we don’t agree with them.”

He also warned about conflating religious liberty with identity politics.

“I think in the American tradition, we are all called to think of ourselves as minorities,” he said. “In a weird way, if you believe what we believe in this anti-statist tradition, you should always have an implicit gut skepticism of any sense that you’re part of a majority power play.

“You don’t want to be a part of a majority in the American experience. You want to understand that your minority status makes you sensitive to lots of other minority statuses.”

“I think that there is a creedal claim about the soul that is built into the American experiment,” he continued. “We can have lots of debates about theology in American culture, in American private life, in American public life but not state life.”

Sasse added that “in our public, creedal sense of what it means to be Americans, we have lots of communities that should have lots of debates about theology. … but there’s a theological anthropology built into the American founding document and into this experiment, and we should revive, recover and re-teach that.”

In the question-and-answer session, Sasse also was asked about vandalism of Black Lives Matter banners at churches in Silver Spring, Maryland. He remarked, “I don’t see the advocacy of violence against religious communities as coming from religious people.”

He also expressed his support of religious nondiscrimination laws: “It should not be the goal of the government to get to the point where we all think the same way.”

NEXT: Archbishop Chaput’s remarks to CNS about ‘Amoris Laetitia’ and its implementation